What you have seen here today, apes on the five continents will be imitating tomorrow. 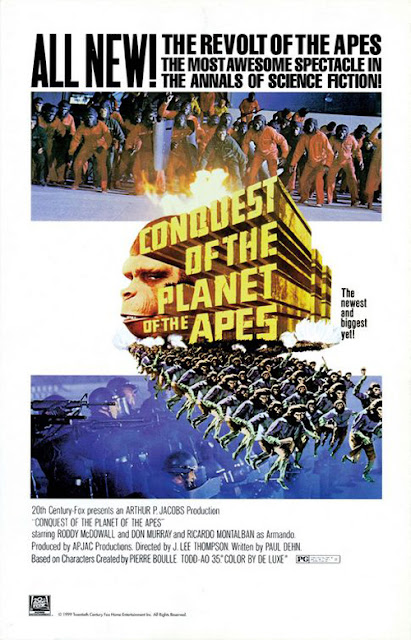 Much better than I remembered, sequel number three is a fairly gripping film up until the last third. At which point, it devolves into a well lit but rather laborious extended fight sequence.

Ricardo Montalban is hugely sympathetic, Don Murray decidedly not. Some significant logic holes present themselves. If many, the Governor included, are concerned about the apes' potential wasn't it a bit foolhardy to take them on as pets, particularly when the death of cats and dogs rather emphasised Cornelius' prediction of the future? And it seems unlikely that anyone would risk training gorillas. But the rather grim totalitarian feel of the piece works very well.

November 08, 2014
Small Soldiers (1998)
An off-peak Joe Dante movie is still one chock-a-block full of satirical nuggets and comic inspiration, far beyond the facility of most filmmakers. Small Soldiers finds him back after a six-year big screen absence, taking delirious swipes at the veneration of the military, war movies, the toy industry, conglomerates and privatised defence forces. Dante’s take is so gleefully skewed, he even has big business win! The only problem with the picture (aside from an indistinct lead, surprising from a director with a strong track record for casting juveniles) is that this is all very familiar.

Dante acknowledged Small Soldiers was basically a riff on Gremlins, and it is. Something innocuous and playful turns mad, bad and dangerous. On one level it has something in common with Gremlins 2: The New Batch, in that the asides carry the picture. But Gremlins 2 was all about the asides, happy to wander off in any direction that suited it oblivious to whether the audience was on …
Post a comment
Read more

May 29, 2017
Jeeves and Wooster 2.5: Kidnapped  (aka The Mysterious Stranger)
Kidnapped continues the saga of Chuffnell Hall. Having said of 2.4 that the best Wodehouse adaptations tend to stick closely to the text, this one is an exception that proves the rule, diverging significantly yet still scoring with its highly preposterous additions.

Jeeves: Tis old boggy. He be abroad tonight. He be heading for the railway station.
Gone are many of the imbroglios involving Stoker and Glossop (the estimable Roger Brierley), including the contesting of the former’s uncle’s will. Also gone, sadly, is the inebriated Brinkley throwing potatoes at Stoker, which surely would have been enormous fun. Instead, we concentrate on Bertie being locked aboard Stoker’s yacht in order to secure his marriage to Pauline (as per the novel), Chuffy tailing Pauline in disguise (so there’s a different/additional reason for Stoker to believe Bertie and she spent the night together, this time at a pub en route to Chufnell Hall) and …
Post a comment
Read more