A new kind of technique for televising opera. 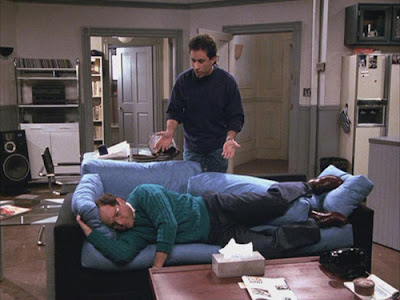 George persuades Jerry to go in with him on a stock investment. The price then proceeds to plummet.

If the hook isn’t the most inspired that Seinfeld and David would come up with, thematically it is of-a-piece. Jerry is persuaded into an action by one of his friends against his better judgement and spends the rest of the episode regretting it. This is a rarity in that George emerges triumphant. We discover that George finally made money through selling unlikely inventions when he returns in Curb Your Enthusiasm (the iToilet app) and the two writers clearly have fun with the choice of investment; Zantrax, “A new kind of technique for televising opera”. It’s the episode’s parting shot investment that takes the prize, however.

I’m generally critical of the stand-up elements, but this is a rare case where Jerry’s routine is superior to the corresponding sequence in the storyline.  The miniscule appearance of Jerry’s shrunk shirt is appropriately OTT, but the drycleaner riffing is far better expressed on stage.

The opening scene in the diner is full of the kind of random quirkiness that the series is renowned for. This is the first time Jerry indulges his Superman obsession, while Lousie-Dreyfus flits from distracted (“I dropped a grape”) to goofy (her spoon-balancing act) to nonplussed (her response to Jerry’s “pip of steel” joke) with inspired energy and abandon. I’m not going to keep a boyfriend/girlfriend count of the main characters, as it’s been done repeatedly elsewhere, but this one is a cat owner and she’s suffering from allergies (the pay-off is that he chooses his cats over her).

Everyone is well catered for, though. Kramer’s undisguised delight in Jerry’s stock tribulations is only matched by Jerry’s wry amusement at his amusement. And Cosmo’s harebrained schemes resurface; here he has an idea for a rollout tie dispenser.

George is at his most conceited and mercurial. When it looks as if he's going to lose his money, his desperation sees him try to visit his sick tipster in hospital before resigning himself to the situation. But, when he makes a mint, he’s waving a cigar around and regaling his friends with how he knew it all along. Then, when the bill comes, he reconsiders his initially generous tip; his Cloud Nine experience can only last for so long before his neurotic, selfish impulses invade upon it.

The other aspect, almost forming a B-plot but not quite, is the demise of Jerry’s relationship with the previously seen Vanessa. Seeing Seinfeld rematched with a girlfriend is something of a rarity, but their dissolution is succinctly sketched out. Thinking they are moving on to “Phase Two”, it becomes clear that, rain bound in a Vermont hotel, they have nothing to say to each other. As with The Stakeout, the device of Jerry’s internal monologue is used effectively to counterpoint the conversation.

Jerry: I think Superman probably has a very good sense of humour.
George: I never heard him say anything really funny.

Kramer suggests he may have “some people I met at a rock concert” to stay in Jerry’s apartment while he is away:
Kramer: Mind if they use your bed?

Jerry (stand-up routine): You see, the problem with drycleaners is that we actually believe this is possible.

Having spied an attractive woman on the street, looking through Jerry’s window with a pair of binoculars:
Kramer: I’m going down there to try and talk to her.

The characters and the chemistry are there, but the scripts aren’t yet singing. Even at such an early stage, though, Seinfeld delivers consistent laughs.

1. The Robbery
2.  The Stakeout
3. The Stock Tip
4. Male Unbonding
5. The Seinfeld Chronicles