I know where you should be. 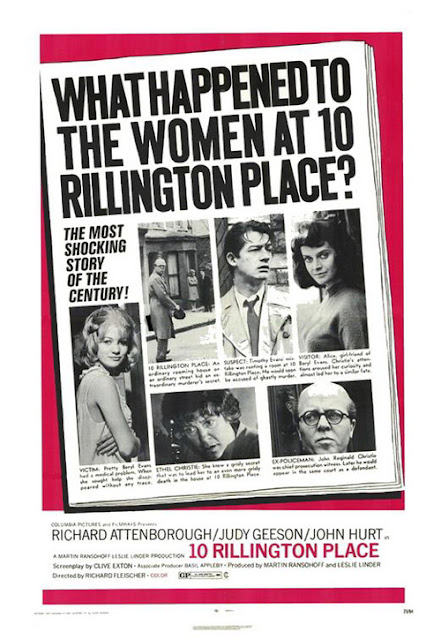 This adaptation of Ludovic Kennedy’s book (yes, the Did You See…? presenter) about notorious serial killer John Christie is a gripping, low-key affair. It retains an air of authenticity by firmly rooting itself in the mundanity of everyday life, and thanks to a transformative performance from Richard Attenborough.

Attenborough makes Christie outwardly normal and at once sinister. There is little to single him out as sociopath; he is soft-spoken (like a creepy Alan Bennett) and only slightly off in demeanour. He’s just a small, balding man with a bad back and a devoted wife. Christie gassed and strangled his victims over a 10-year period between 1943 and 1953, but the case is at least as well known for as the wrongful conviction that contributed towards the repeal of the death penalty in the UK.

American director Richard Fleischer supports Sir Dickie’s fine work with commendable restraint. Fleischer’s journeyman career would not obviously lead him to this kind of material. He was responsible for 20000 Leagues Under the Sea, The Vikings, Fantastic Voyage and Doctor Doolittle. Most likely it was his account of another serial killer, The Boston Strangler (starring Tony Curtis), three years earlier, that got him the gig. Fleischer’s subdued, brooding direction ensures the picture linger in the mind. It was made during a period when restraint in depicting sex and violence was no longer necessary (just look at the rather distasteful relish Hitchcock takes in the following year’s Frenzy), but Fleischer has no interest in reveling in Christie’s crimes. There’s perhaps one misjudged moment, where Fleischer cuts from Evans’ execution to Christie nursing his bad back; it plays as a bad taste comedy punchline (while there is considerable irony at play in the film, particularly in the depiction of the gullibility of Christie’s victims, at no point is anything else played for laughs and rightly so).

Over the years, the serial killer subgenre has become ever more glossily overcooked and lacking in depth. The crazed cartoonishness of the Michael Myers and Jason Voorhes wave of masked maniacs gave way to cultured masterminds of carnage when Thomas Harris introduced Hannibal Lecter to the world. He allied a larger-than-life psycho with methodical thoroughness in depicting forensic science. But accounts of actual cases have generally been lacking. David Fincher probably did it best with Zodiac, although by necessity an unsolved case must be entirely from the perspective of detective work. Rillington Place comes a decade after Psycho and Peeping Tom, and arrived in a post Moors Murders, post-Manson landscape. It tells of events during the 1940s, but the surrounding urban decay and hardship seem topical to the coming decade.

The feeling of authenticity is no doubt aided by the decision to film at the actual location (along with No.6 on the same street), but it’s arguably above and beyond the call of duty in striving for verisimilitude.

The trio of main supporting players are all impressive. John Hurt’s Timothy Evans, the tenant sentenced and hanged for murdering his wife and child (he was pardoned 12 years later), is a study in the dim and impressionable. Judy Geeson plays his wife Beryl and Pat Heywood is Ethel Christie; her depiction of gradually dawning realisation is subtle and believable.

Fleischer’s film concentrates on the timeline of the Evans’ tenancy, which means that the trial of Christie isn’t covered, and his prior acts only briefly by way of a wartime scene-setter. I’d have liked a more complete account; aside from a scene where Christie boasts of the media coverage of the trial and his involvement, there is little sense of the wider impact of the case (the film doesn’t even clarify how many victims there were). Hurt was rightly nominated for a BAFTA for his performance, but it’s a glaring omission that Sir Dickie went unrecognised. It’s the performance of his career.