That’s the way it is with the good ones. You’re sure you’ve heard them before. 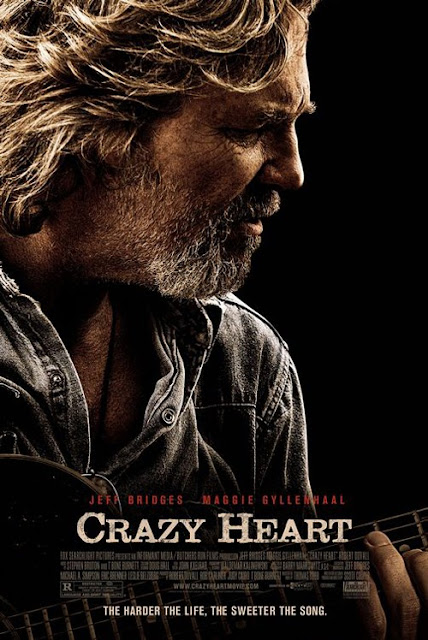 Likely to be barely-remembered as “What was that film Jeff Bridges won the Oscar for?” It’s his Blue Sky. You know, the one Jessica Lange won the Oscar for. See what I mean? Not that Jeff didn’t deserve the statue. This is a fine performance, but Crazy Heart as a whole is merely so-so. Respectably told, but familiar and resolutely unexceptional.

Bridges is washed-up, alcoholic country music star “Bad” Blake, reduced to touring third-rate venues such as bowling alleys (in an amusing nod to The Big Lebowski, Blake is informed he must pay for his booze but he is entitled to free bowling). His health is giving way and he hasn’t written a new song in three years. He’s also perpetually feuding with his manager (James Keane) and bears a grudge towards his protégé Tommy Sweet (Colin Farrell), who has gone on to great things. When Blake meets Jean, (Maggie Gyllenhaal) a single mother whose path crosses his when she interviews him for the local rag, romance blossoms. Blake finds himself inspired again, and even accepts an olive branch from Tommy (opening for one of his shows). But Blake’s addictions look set to ruin a good thing.

Everyone involved gives first class performances; this is the sort of movie where name actors working for scale for the prestige value. Gyllenhaal makes a reactive role come alive, but unfortunately her underwritten character can’t escape the realm of cliché. Farrell is just sympathetic enough that you want Blake to get over himself already and make amends. Robert Duvall (who co-produced) is a rock as Blake’s wise old bar tender pal. And Scott Cooper, adapting Thomas Cobb’s novel and making his directing debut, handles the material with subtlety and sensitivity.

But troubled drunk narratives need to go that extra mile to break free from predictability, and this one doesn’t quite make it (the scene where Blake loses Jean’s son can be seen coming half an hour before it happens). While it comes as a relief that Crazy Heart chooses not to embrace a descent into a Leaving Las Vegas-esque quagmire of self-indulgent misery, the route it does choose doesn’t quite ring true either. Nevertheless, it earns points for not steering away from overly-sensational twists and treating its characters with a low-key respect.

The other legacy of this movie, besides the Oscar, is that looks like it is responsible for Bridges adoption of late-career cowboy stylings. Grizzly growly Jeff, prone to mumbling semi-coherently. Yep, that’s the guy in True Grit and R.I.P.D. If he’s going to succumb to habit-forming typecasting, I want to see more of hippy stoner Jeff. The only example of that we’ve seen of late is his TRON: Legacy turn.