Why is it terrorists never appreciate Burgundy? 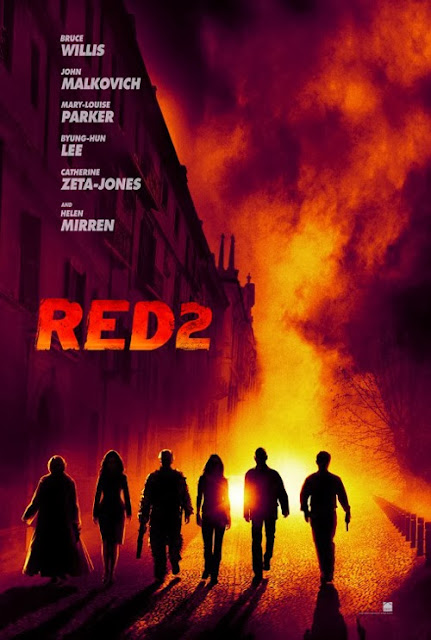 (SPOILERS) If in doubt, sign on for an unnecessary sequel. Red 2 isn’t bad, but it adds nothing whatsoever to its predecessor. More than that, director Dean Parisot may have a feel for the comedy but his action beats seem to be taking place somewhere else (calling second unit). In the end, it’s the continually impressive cast, old and new, that save this one from being completely redundant.

Parisot gave us the splendid Star Trek parody Galaxy Quest, but that was nearly 15 years ago. Since then he’s mostly made a nest for himself on TV (as have a platoon of directors who have had enough of labouring away out in the cold, trying and failing to get movie projects off the ground). Along the way there was the stillborn Fun with Dick and Jane remake on the big screen, but most notable was some solid genre work on Justified. One assumes it was his collaboration with Neal McDonough there that secured him the nominal villain role of Horton here. McDonough’s actually great fun, taking undisguised pleasure in being utterly evil. He manages to eclipse Urban’s ultimately well-meaning antagonist in the first movie.

Writers Jon and Eric Hoeber have returned, but they’re stuck in stir-and-repeat mode. The MacGuffin, a nuclear device called Nightshade that is powered by “red mercury” and sits under the Kremlin, feels derivative of the recent and vastly superior Mission: Impossible Ghost Protocol. The narrative, while adopting a similar travelogue style to RED (complete with arty transitions, here better achieved and suggestive of the DC comic book origins) doesn’t have the same flow. And Parisot only rarely succeeds in integrating the action set pieces.

There is an effective attempt to capture Willis’ Frank Moses at the outset, recalling the SWAT team opening to the first RED. The reversed tables find Frank, Alien style, plucking feckless team members from doorways and dragging him into his lair. But, if that’s a more effective repeat, other references display a wanton lack of inspiration. Where Morgan Freeman was presumed dead early on in RED, only to reconstitute, this time it’s Malkovich (who is still the best thing in this series). Only now he has to compete in the slightly cuckoo stakes with Anthony Hopkins.

Byung-hun Lee (who, like Willis, appeared in G.I. Joe: Retaliation this year) is Han, an assassin tasked with killing Frank. And, like Urban last time out, he turns out to be not such a bad guy after all. A scene in a supermarket, where Lee shows off his considerable martial arts skills, looks like it was filmed entirely on its own and then awkwardly slotted into the main movie. Yet again, there’s an identity twist regarding the villain; Dreyfuss last time, bumbling-but-not-really Hopkins this (it’s a twist you’re expecting from Hopkins first scene).

Still, there is such a surfeit of performers here that even when the writers and director let the side down there’s more than enough to hold the attention. Steven Berkoff appears in one scene. David Thewlis shows up as dodgy dealer The Frog (“Why is it terrorists never appreciate Burgundy?”). Catherine Zeta-Jones, often somewhat variable performance-wise, does no favours to a Russian accent is still good fun as Katya (Frank’s “kryptonite”). There’s a strange fascination in seeing one Hannibal Lector (Brian Cox) share screen time with another Hannibal Lector (Anthony Hopkins). As for the latter, as pay cheque-orientated as his appearance is he almost justifies the indulgence of his hammy/dotty professor persona during the middle section since his reveal as a merciless villain is more than a match for McDonaugh (“And you didn’t see that coming, did you? Old sport”).

Least successful are the attempts to give Frank’s relationship with Mary-Louise Parker’s Sarah some edge and development (“Things were getting a little stale”). Her jealousy of Katya is over-cooked, pushing Parker into frantic mugging mode. Likewise her desire to get involved in the action, but not to the extent of actually killing people. This leads to an ungainly succession of incidents where Sarah snogs otherwise dead meat targets. Worse, when she does end up shooting someone (with a initialised gun given to her by Frank) she has a momentary realisation of horror… and then all is well. The Hoebers presumably want to touch on something a little more serious here, but they chose the wrong picture; this is wall-to-wall superficial (and thus really better for not going there).

Frank: He’s not dead. He does this a lot.

Malkovich continues to get all the best lines, and his chemistry with Willis is as evident as ever. He tells the latter, “I was touched that you cried at my funeral”. When Frank is indignant that Marvin gave Sarah a gun, he replies, “It is America, Frank”. Asked by Sarah if he should eat a decades-old Moon Pie, he observes “It’s before they had the sell-by-dates, stuff”. And, under a heavy fire from Han, Marvin grips hold of Frank for dear life. “Is that a stick of dynamite in your pocket?” asks Frank. “I’m saving it for emergencies”, comes the reply.

A consequence of all this name actor malarkey is that Willis ends up mostly adopting the pose of the straight man. And he is very game, but it remains a shame that the once reliably witty lead is now relied to solid reaction shots. Red 2 was foolishly released during the summer. The original made capital from an October date to become a surprise sleeper hit. Given the more-of-the same nature of this follow-up, Summit should count themselves lucky that it ended up with $60m worldwide shy of the first (most of the drop came in the US). Such an underperformance may put a third outing in doubt, which may be just as well. It’s enjoyable to see these guys bouncing off each other but once was more than sufficient.