Talking about the now can sometimes put one in the then. 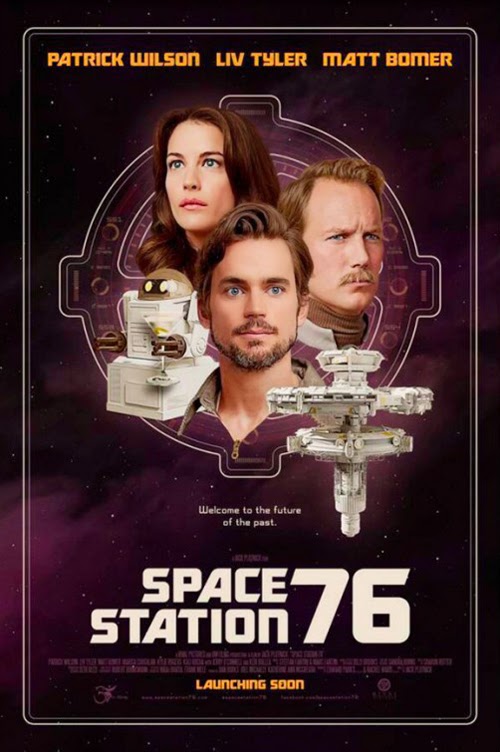 The picture has little in the way of narrative trajectory, hence the concentration on soapy elements; characters work through their issues in a very ‘70s fashion, which naturally includes period-appropriate drink, drugs, sex and psychoanalysis. The crew include the unhappy, closeted, chain-smoking Captain Glenn (Patrick Wilson, offering a more subdued but tache-laden approximation of Ron Burgundy).

New co-pilot Jessica (Liv Tyler) struggles with inherent sexism in the work place and her conflicted feelings on not being able to have children. She forms a maternal friendship with Sunshine (Kylie Rogers) a seven-year old who doesn’t have much luck with pets and has no friends her own age. Her adversarial parents are robot-handed mechanic Ted (Matt Bomer) and self-involved, manipulative Misty (Marisa Coughlan). Misty is seeing Steve (Jerry O’Connell) on the side, and Ted and Jessica become attracted to each other. And, of course, tensions escalate. In a fairly lackadaisical manner. You get the idea.

Embedded in this space suburbia are recognisable ‘70s artefacts and mores. Ted is growing weed in the geodesic garden (very Silent Running, well not the weed bit although you know Bruce Dern would have been), Missy is addicted to prescription medicines (with which her robot shrink plies her), the Captain attempts to hide his drinking (when he gets pissed he powers the engines up and down continuously, a substitute automobile) and sexuality and takes out his tensions on those around him. There are ‘70s futurism ideas like food machines, and then-modern toys like videotapes and viewfinders. Burnt orange is a common colour for walls, and turtleneck sweaters are in.

Because the picture is unwilling to be pigeonholed, it’s easy to assume it is misrepresenting itself. The space age material is limited to Kubrick nods (the sets, Keir Dullea cameoing - and bearing a passing resemblance to Emperor Palpatine) and a reflection of the essential mundanity of space that evokes Dark Star by way of sets and lighting that consciously evoke ‘70s TV science fiction; there’s no proper science fiction here, and comments about never having been to Earth and the Quasar Revolution are more nods to those trappings than suggestive of any interest in them.

Occasionally it looks as if Plotnick intends to veer off into Airplane! territory; the dramatic music during an opening sequence, where it appears as if the captain is about to open fire, merely leads to him sparking the equivalent of a car cigarette lighter. The captain’s attempts at suicide or consistently foiled by the ship computer, be it electrocution or poisoning.

Therapy sessions with Sleeper-esque Dr Bot, a programmed psychotherapy robot, are consistently very funny and invariably lead to the suggestion, “Perhaps you would you like to try valium?” His response to Missy’s declaration of feelings for her therapist is “Emotional overload!”. But this isn’t really a spoof, and the performances aren’t self-mocking, they’re treading a line between Frank Drebin deadpan and earnest portrayal.

Space Station 76 is reasonably engaging once one slips into its groove, but it’s very slight. The science fiction conceit is just that, obstinately refusing to indulge its potential aside from the occasional comedy (Dr Bot) or emotional beat (Sunshine’s favourite game is playing zero gravity). It’s a decision that is likely to elicit Marmite responses of “Oh, that’s clever; I see what they did there” (it isn’t especially, but it is attention seeking) or discontent that the makers have done some misleading. I’m somewhere between the two, however. This isn’t really much of comedy or, drugs references aside, much of an oddball stoner movie either. And yet, while there are interludes of borderline boredom, the characters themselves gradually creep up on you, aided by an ensemble of strong performances.