You want to investigate other people? 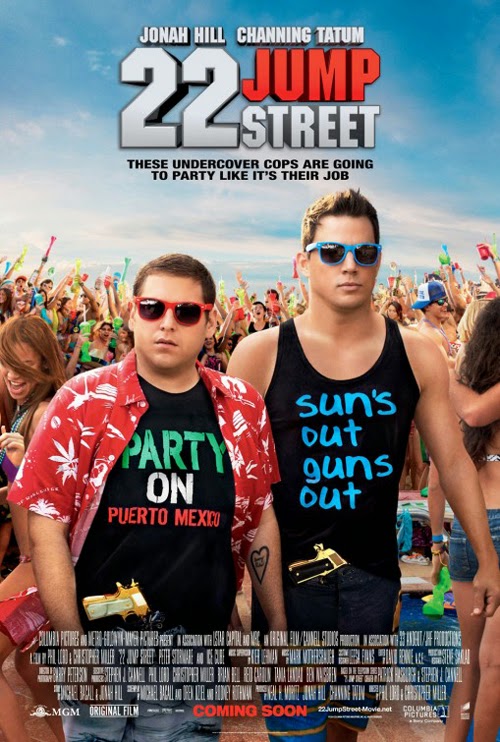 22 Jump Street has been hailed as that most elusive of beasts, a (comedy) sequel that improves on its predecessor. That’s pretty much the case. Phil Lord and Christopher Miller’s second $300m+ worldwide grosser of 2014 cemented their King Midas status; Hollywood is now their oyster, and everyone wants to cut a deal to reap the greenbacks. That said, it should be noted that 22 Jump Street excels in one key area; being ultra-meta unto itself. The substance of the picture is guilty of the overstuffed and under-baked issues that afflict many a comedy running closer to 2 hours than 90 minutes. Lord and Miller’s trio of writers have self-consciously come up with similar-enough-to-21 Jump Street avenues to explore (college for high school, smart drug for synthetic high). As such, they (successfully) coast on its intrinsic meta-ness, ensuring instant forgiveness for its repetitions and lazy excesses.

Lord and Miller were already feasting on postmodern referencing of the silliness of making a big screen version of the Johnny Depp star-making TV show with the first instalment. They then crossed the bridge into meta-heaven with The LEGO Movie, so it’s unsurprising that they dive straight into the fray again with 22. “Nobody gave a shit about the Jump Street reboot when you came on. Anyone with half a brain thought it was destined to fail” announces Ice Cube, whose casting illustrates Lord and Miller’s particular skills; he’s actually funny as a grumpy hard-ass here, taking advantage of his limited acting abilities. Hill’s excruciating attempts to be hip or show empathy (“Get the guy some fucking water. He’s black, he’s been through a lot”) have cachet mainly in the fact that it’s no-nonsense Cube who is there in the room with him. There is much talk about doing the same thing as last time to ensure success (which, pretty much, they do; it’s okay, as they do it in a meta-manner), leading to suggestions that instead they might mix things up (Tatum’s Jenko suggests, “What if I went into the Secret Service and tried to protect the White House?”) and references to 23 Jump Street well in advance of the sequel-bursting end credits.

So, despite the arch-cleverness, most of what ensues is altogether familiar. Even the bromance between Jenko and Schmidt undergoes the inevitable extended subplot where they are taken for a gay couple and then indulge the illusion through inferred language (a common comedy trope, not least from Seinfeld’s The Outing). There tends to be a have-cake-and-eat-it quality to homophobia in Hollywood comedies; if there’s a line or two that is affirmative or in favour of tolerance, then the assumption is this gives a free pass to all manner of obnoxious and offensive humour (Adam Sandler is particularly prone to this). The manner in which the Jump Streets casually traipse through a potential homophobic minefield looks entirely innocuous when compared to the antics of boorish oaf Seth Rogen in the same summer’s Neighbors.

Lord and Miller even meet this tendency towards “inclusive” homophobia head-on with Jenko’s attendance of a Human Sexuality course (“Sorry for being a homophobe”). Elsewhere, the meeting with the college psychiatrist is the stuff of classic comedy of misunderstanding. It’s just that, even when done well, as it mostly is here, this has become an overused device. And it isn’t as if one of the stars hasn’t been brought to task for using slurs (immediately preceding the picture’s release to boot).

There are a lot of jokes about how young Hill doesn’t look, and the boy is not showing his (still slim of) years well. If these get old fast, more of a concern (and I say this as one who thought his performance in The Wolf of Wall Street was excellent), he just doesn’t grab the laughs, easy sympathy, and audience engagement the way Tatum does. Hill’s looking tired in more ways than one, and Schmidt’s plotlines are mostly running on empty (the picture has the same “geeks will inherit the Earth” conceit as Neighbors, by giving Hill an attractive girlfriend; no doubt all Apatow protégées are raised this way).

Tatum plays up the loveably naïve jock like one born to the comedy throne (and, with Jupiter Ascending finally arising soon, he may need to keep at it); he’s ostensibly the straight man, yet he makes off with all the laughs. His interaction with Owen Wilson-alike Wyatt Russell (a product of Kurt’s loins) is very endearing. Hill, meanwhile, romances Amber Stevens, leading to a twist that is so obvious it really needed to be meta-referenced since the picture isn’t clever enough to make actual yuks out of it (actually, Tatum’s response to the news is hilarious, so that’s not entirely fair).

Hill and Tatum, of course, start off best pals, split up, and get back together again. There are drug dealers led by Peter Stormare (on autopilot, but who can blame him). There’s a very funny bad/good trip sequence, a frat house intiation, a Spring Break (that, like much of the third act, runs close to having exhausted the reservoir of goodwill) and a fight between Jillian Bell and Jonah Hill that is improvised to the point of absurdity (Bell consistently wins the bout). There’s a Benny Hill reference too, but ultimately the trad-sequel approach wins out in the struggle with self-reflexivity. One can’t help thinking that, having taken it this far, Lord and Miller should just have gone for broke.

It’s been rumoured (via Sony leaked emails) that 23 Jump Street will be a Men in Black reboot affair. That might be a smart, leftfield decision. Lord and Miller will only be returning as producers, and, given that the end credits preview the next 20 or so Jump Streets (including Generations with Richard Grieco and 29 with boorish oaf Rogen; the latter testifies to how much more engaging Hill is, even if he seems not to be having quite such a good day), it’s difficult to see how the next one can be kept fresh. They’ve done and dusted the self-conscious character-based scenarios. Surely the only way forward is to throw caution completely to the wind.