But I wanna see The Blob! 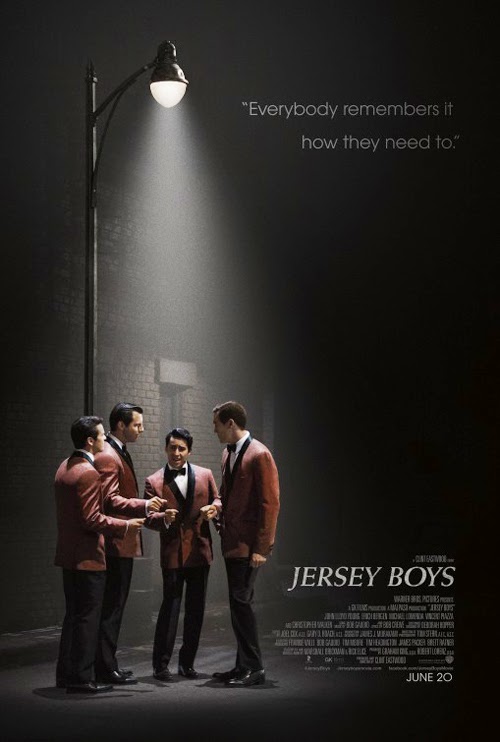 Unlike Hudson Hawk, I never did want to sing like Frankie Valli. So maybe the intrinsic appeal of this Clint Eastwood not-musical (I expect he swore of them after Paint Your Wagon), based on the broadway musical, is probably rather lost on me. It isn’t dislikeable as such, but it’s so slight and effort-free and really rather dull. Jersey Boys is so lightweight, it’s in danger of floating off into the firmament at any moment. A film so conscious that it’s diet-Goodfellas in tone and approach, it even overtly references its inspiration. Repeatedly.

Jersey Boys is also fairly poor name for a movie; what works in the realm of musical theatre may not translate to the big screen. Maybe The Four Seasons wouldn’t have cut it either, but the title doesn’t have pulling power. Musicals are hit and miss as cinema properties, of course, but – I don’t know how it went over on stage – you’d barely know this was one. Sure, it’s got the songs (sung impeccably by John Lloyd Young as Valli). Yet the biggest clue to its show origins is the to-camera monologues as various members of the group introduce different passages of the proceedings. Was Clint embarrassed to be doing an all-singing, all-dancing picture? Is that why he left the big number for credit roll?

And, is there sufficient draw here, outside of the (admittedly) memorable tunes? The mob trappings are very loose, and borderline benign (that Goodfellas-lite thing). Christopher Walken essays the most chucklesome made guy you ever did see, and light foots away with many of the biggest laughs (“Hey you – Stay out of my bathroom,” he instructs one of the group, on learning he is prone to pissing in the sink). But the sashaymeister only actually gets to show his moves during the final credits.

The rags-to-riches trajectory is tried-and-tested. As such, this comes across as very familiar, without nearly enough backbone or drama to make it distinct. There are scrapes with the law (but Frankie’s a good kid, see?), the arranging of the various band pieces to make a hit (the arrival of Erich Bergen’s songsmith Bob Gaudio), and the gradual disintegration of the group as Tommy DeVito (Vincent Piazza) becomes mired in debt. Then there are the infidelities (skirted lightly over) and family traumas (the death of Frankie’s daughter – don’t worry, it’s fairly light; everything is light). I found my interest piqued as the group fell apart and Frankie fell into the motions of a made-up backing band, before scoring a hit with the Gaudio-penned Can’t Take My Eyes Off You. But, by then, we’re nearly at the end.

And being nearly at the end means that the latex shuffle is needed. The youthful group members re-join as unconvincingly aged as Leo in J Edgar for their 1990 induction into the Rock and Roll Hall of Fame. So runs the course (barring overdose) of the utterly pedestrian musical biopic. But is there any other way to do them? There have been occasionally inspired snippets of bands’ histories (Backbeat) but even Oliver Stone at his height came unstuck with the verbatim regurgitation of a band in the full throes of psychotropic abandon (The Doors).

The cast are solid. Piazza walks off with the film in the showiest part as the cocky wannabe-hard guy; he’s already had good practice giving attitude as Lucky Luciano in Boardwalk Empire. Lloyd Young is (yes!) light and inconsequential, so fits the material. Bergen looks like both Tate Donovan and the disgraced Commander Decker. Mike Doyle plays up the flamboyance as Bob Crewe, but not so much that he becomes a complete caricature.

Admittedly, the film is peppered with good gags. A character is watching Clint in Rawhide at one point. Joe Pesci (Joey Russo), we discover, was a friend of Tommy (and after being bought out, Tommy went to work for Pesci), and was responsible for bringing them together with Gaudio. Pesci, inevitably, utters his most celebrated line “Funny how?” (no, not “They fuck you at the drive-through”) The taciturn Nick Massi (Michael Lomenda) finally goes into full meltdown mode over the 10 years he had to put up with Tommy, but the focus of his rage is his untidiness and poor hygiene (rather than squandering half a million he didn’t have).

Clint’s career probably looked on its last tired old legs. Jon Favreau was originally attached, and this seems exactly the sort of journeyman “What shall I stumble into next?” fare you’d expect from him. Clint has become that guy also, crashing from project to project like a wind-up toy, his Zimmer frame barely leaving any impression, so forgettable are the results. Then he made American Sniper and suddenly there’s patriotic zeal in abundance and queues round the block. He should have remade Kelly’s Heroes. There’s some wit in Jersey Boys, then, but it’s caught between two stools. It wants to come from the mean streets and yet indulge the musical chicanery of West Side Story. It probably worked better on stage.