The ceremony is about to begin. 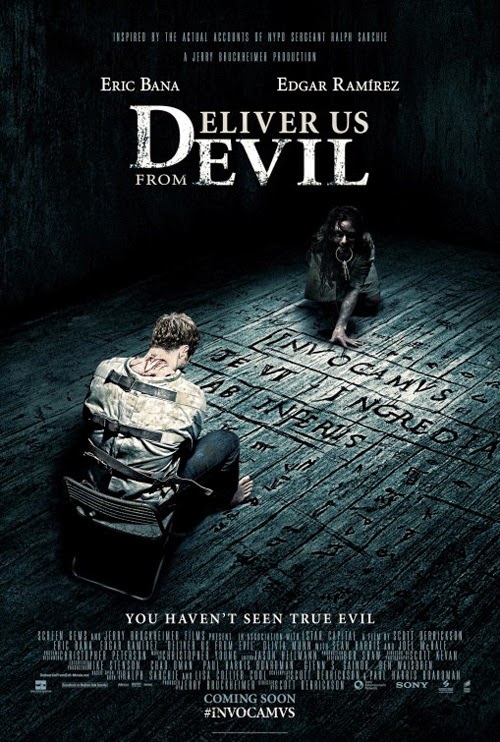 (SPOILERS) Inspired by actual accounts, except having nothing to do with any of the actual accounts, Deliver Us from Evil is the tale of a New York cop kicking ass for the lord in tandem with an ex-drug addict priest. It really should have been a whole lot more fun and provocative than it is.

Scott Derrickson, a rare Hollywood Christian, and co-screenwriter, could at least have injected some searching philosophical ruminations about the nature of good and evil into his picture, rather than the vapid guff discussed by Eric Bana’s Ralph Sarchie (the cop) and Edgar Ramirez’ Mendosa (the drinking, smoking priest). It isn’t unheard of for horror movies to have such leanings. The underrated The Exorcist III managed it, again between a cop and a priest.  Alternatively, if this had revelled in its subject matter, perhaps as a possession equivalent to The Hidden (it’s no more grounded), with the disbelieving detective gradually shown what lies beneath, it might have worked. But Derrickson is so earnest, and so leaden with his plot devices and shock tactics, he saps any spontaneity or energy from the proceedings.

He also imbues the picture with a rather muddled subtext. Making the enemy a demon that inhabits the vessels of wholesome Americana, on vacation from the Middle East, is nothing new. Friedkin did it first, after all. But that was before the War on Terror. Now it looks like an extremely dubious choice. The souls of God-fearing American marines are invaded in Iraq, and they bring home devilry. Of course, this might be a metaphor for how these corrupt conflicts will ultimately eat away at those waging them. Except the picture hinges on the expulsion of this demonic terrorist from the Land of the Free.  Only then will the country be at peace.

This is a sloppy, confused affair, given to silly set pieces and clumsy horror theatrics. If there’s any doubt in your mind of how nasty this demon is, it even crucifies a poor puddy cat. Derrickson makes the bombastic or bland choice every time. One of the most naturally intimidating actors to ever step before a movie camera, Sean Harris, is plied with freaky make-up and completely loses his edge. Eric Banana still can’t catch a break, but part of the problem may be his determination to play such uncharismatic types. His character, Ralph Sarchie, was an NYPD cop who became a demonologist.

Derrickson even overstates the effect of his job on Sarchie. No sooner has he encountered the damned and he begins seeing things others don’t, than he starts yelling at his kid. Who has a room full of freaky toys, as kids in horror movies always do. Sarchie’s fish tank is the scene of fish-on-fish carnage. Derrickson appears to have been inspired the superior (but no classic) Fallen, by having a popular beat combo (there The Rolling Stones, here The Doors) underpin the weirdness (“So these messages, they’re references to doors?”) This is risibly, rather than spookily, inserted.

Sarchie is required to supplicate himself before God, which leads to some particularly ripe dialogue (“Ever since that night, I’ve had a darkness growing inside me like a cancer”). When the inevitable exorcism comes, it’s by way of Seven-inspired plot twists (the killer is apprehended, but the loved ones of the cop are still in danger). The only surprising thing about this sequence is that Derrickson allows Harris restoration rather than expiration. He’s been having a tough time of it, mind, what with his forehead cracking open and eating his own leg, so sending the ridiculously named Jungler (as in one who lives in the jungle, plays Jungle music, or who is Jungian by design?) packing. The crowning cliché comes when Moby circa Play cues up; tranquillity has been restored.

Notably, the first trailer for Deliver Us underplayed the super-psycho Iraq vet demon angle, emphasising creepy home horror. All the better to ride the coattails of the previous year’s The Conjuring, both laying claim to be based on true life supernatural goings-on. There’s the occasional memorable image (a crumpled jump victim, strewn at strange angles on the tarmac) but they linger because they’re in isolation from the main.

Derrickson's bludgeoning approach hasn’t done him any harm. He’s secured the gig of directing prize Marvel vehicle Dr Strange, returning to him to the big budget arena that brought the remake of The Day the Earth Stood Still (unlike most, I didn’t hate that picture, although it had absolutely no good reason to exist). He’s a competent director who has received good notices for his previous horror flicks (The Exorcism of Emily Rose, Sinister), but there’s nothing that one would describe as flair in his work. Perhaps that’s the way Marvel wants it. Dr Strange is, after all, head honcho Kevin Feige’s pet project, so he may just want a safe pair of hands he can dictate to, ones that won’t rock the boat. If he isn’t careful, though, he could finish up with something as dramatically inert and undemanding as Deliver Us from Evil.