Is dad a badass? 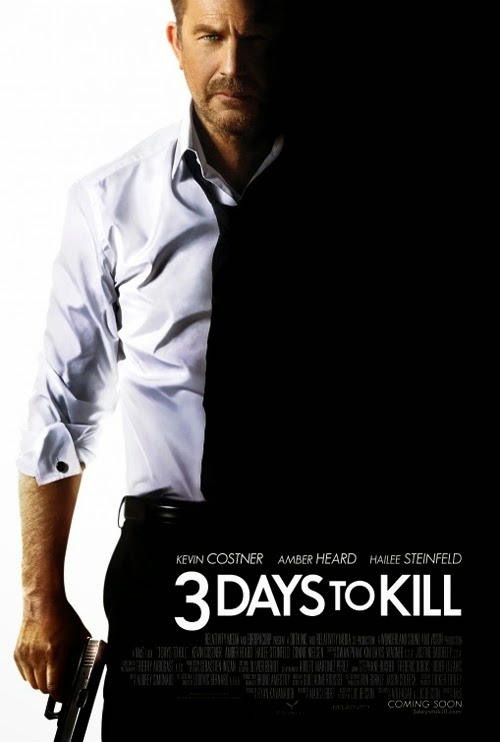 Costner riding the crest of… well, being sucked up by a twister in Man of Steel, I guess, ploughs his comeback trail by going all Liam Neeson on the arses of various Eurotrash types. Luc Besson’s formula cheapie action vehicles have scored one great success (Taken) and one moderate one (Transporter). 3 Days to Kill won’t be following them into franchise territory, but it’s actually a lot of fun.

McG, asking for trouble by saddling himself with a nickname, was even less appreciated by the dubious after he decided to take on the Terminator franchise. I don’t especially mind his hyperactive flash, though. He can stage a decent action scene, and he’s considerably less stomach churning than the equally derided Brett Ratner. McG’s last movie, This Means War, was fairly awful, lumbered with an unfunny script and a trio of leads with zero chemistry. Here, equipped with the latest of Besson’s ten or twelve annual screenplays, the results are closer to the familial funnies of The Family than the dopey deadpan of Taken.

Costner’s game, and as CIA assassin Ethan Renner he learns he has three months to live. So Ethan moves to France to be close to his estranged family (gorgeous Connie Nielsen is his wife, and Hailee Steinfeld his petulant daughter). Instead of cuddly toys, out-of-touch pater buys Zooey a purple bicycle (shades of Taken there). Meanwhile, he finds a family of squatters camped in his flat and is offered a lifeline by CIA superior Vivi (Amber Heard); an experimental drug in return for his killing arms dealer the Wolf (and his dodgy assistant
the Albino).

There’s an effective comedy trail of incongruity here. Costner is continually interrupted mid job by his daughter’s teeny bop ringtone, usually during the torture (it’s the CIA way, just live with it) of some unfortunate (frequently Marc Andreoni as Mitat, with whom Ethan swops parental tips). It’s the same sort of play of contrasts we saw in The Family (ultra violence versus domesticity) and I have to admit it also frequently tickled me there. Dad offering his daughter advice on how best to hit someone at school, particularly coming from Costner in slightly irked mode, is quite winning.

True, the family stuff is never actually affecting or meaningful, and scenes such as dad teaching Zooey to dance make you choke up in the wrong sense, but for every scene like that there’s another where Zooey is given a pasta sauce recipe by one of Ethan’s torture victims, who is at gun point on the other end of the phone.

Amber Heard, both in terms of the character she plays and her casting, doesn’t work. She’s completely ridiculous, almost as if McG had been watching Sex and Death 101 and The President’s Analyst back-to-back and decided to mash them together in a constantly costume-changing spymaster with a nymphomaniac/ sadistic bent. The character is too broad, and Heard doesn’t have the chops to pull her off, but it does peg the movie as one ready and willing to embrace the absurd.

Richard Sammel (one of the very best things’ in Guillermo del Toro’s lousy The Strain) makes a good villain, and Tomas Lemarquis makes a good henchman (with a thing for decapitation). There’s a fantastic reveal scene towards the end that could have pushed the climax in an entirely different direction (of the cat-and-mouse, battle of wits variety). It would have been more in keeping with the two-tone picture as a whole. Instead the makers opt to shoot the shit out of everything, which is still engaging, but a lost opportunity.

Mostly this is a lot of fun, and well-played. Costner’s never been a consistent action star, although he’s quite accomplished (he can hold a gun with conviction and poise), and it’s a nice change to see him do this between all the many sports movies he has to fit in during his career second wind. 3 Days to Kill is also a good reminder that he has an able light touch as a comedy actor. And that he has a marginally better wigmaker than Nicolas Cage.