Life is often so unpleasant. You must know that, as a peasant. 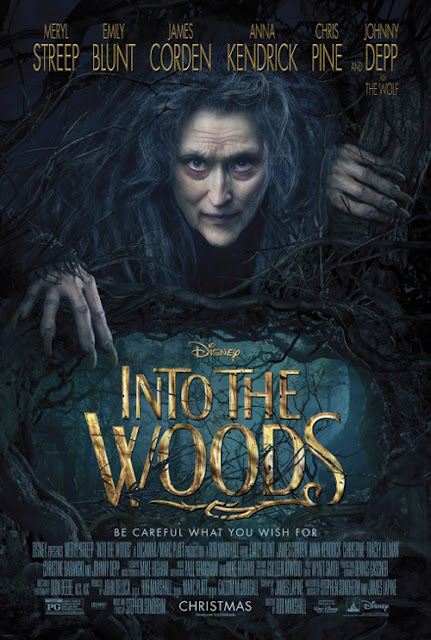 (SPOILERS) Rob Marshall tackles another musical, with all the acumen he brought to Chicago.  And non-musicals (Pirates of the Caribbean: On Stranger Tides). Sure, he ensures nice art direction in, but that doesn’t make a good movie. I can’t say I’m hugely au fait with Stephen Sondheim’s oeuvre (West Side Story is a classic, obviously, and the Sweeney Todd movie is diverting enough), but if this is evidence of his musical/storytelling skills he’s rather lacking (does that count as heresy?) Mash up a few fairy tales (Little Red Riding Hood, Rapunzel, Cinderella, Jack and the Beanstalk), sprinkle a few variable songs over the top, and attempt to shoehorn in some kind of message about what happens if you get all you dreamed of (what a spoilsport).  It’s a tepid affair, with only the occasional vital performance to perk it up.

There’s no shortage of fairy tale riffs these days, probably going back to Shrek, and we even had a Grimm specific piece a decade ago (Terry Gilliam’s ill-fated but sporadically sparky Brothers Grimm). Disney’s all over them like a rash; live action, animation, TV series, so it's no wonder they went for this one (eventually). Marshall’s movie manages to be simultaneously redundant and over-reliant on obvious stunt casting. Johnny Depp pulls a Brando cameo as a blink and you’ll miss him wolf, Meryl Streep hams it up rotten as a witch.

The picture particularly crippled by the undesirable presence of James Corden (thankfully exiling himself across the Pond and into a chat show) as the Baker/narrator. His voice is woefully ill equipped to introduce the tale, bereft of the remotest gravitas or garnish. He’s also expecting us to believe he could possibly be married to Emily Blunt.

Who is quite wonderful. As is Chris Pine, as a pompous jackass version of Captain Kirk (playing Cinderella’s prince). When these two share a scene and a song, Into the Woods momentarily comes alive. This is the only point where one gets the giddy sense of tales seeping into each other, mayhem unleashed and worlds colliding. Maybe the incredibly downbeat conclusion had more resonance on the stage (it was reportedly toned down by Disney to make the picture more family friendly) but here it just seems unnecessary and harsh in material that is essentially lightweight and frivolous.

Marshall ought to be able to marshal his great resources, but still manages to make the entire enterprise seem rather static and lifeless. Once the great wedding has taken place and the characters are lost in the woods once again, he envisages the most clueless and uncoordinated of moments; it screams of its stage origins in a most unflattering manner.

Essentially, others have done this kind of thing, and with much more verve, wit and lyricism. There’s exactly one song (It’s Your Fault) that gives a hint of what this might have been; it’s quick, clever and sharp. Elsewhere, there’s wholly too much of annoying little scamps wailing about beans and granny and the like. Tangentially, it’s nice to see (even more briefly than Depp) Frances de la Tour as the Giant’s Wife.

Marshall’s picture was inspired by Obama’s speech on the tenth anniversary of 9/11 (only in Hollywood, eh?), but you’d be hard pressed to discern any great transforming and unifying spirit in this anodyne and stillborn lump. Still, Into the Woods made money, so it should keep the stage-to-screen gravy train going a few years yet for Sondheim’s back catalogue.