This is all I ever dreamed about. 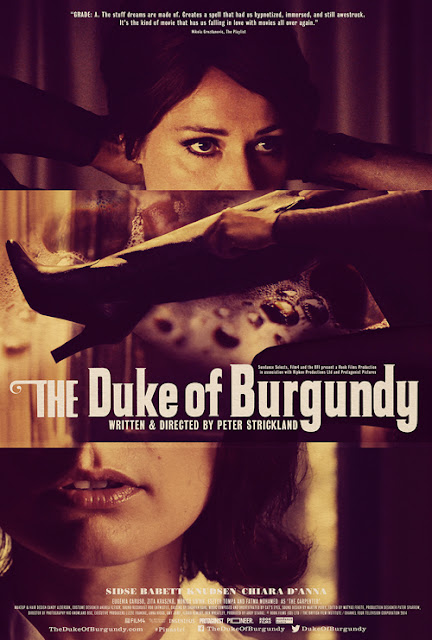 (SPOILERS) Is Peter Strickland on a mission to redress every ’70s exploitation subgenre as critically lauded art fare? His last film, Berberian Sound Studio, took its cues (most audio, rather than anything grizzly) from Italian giallo. Now he’s at it again, turning to the Euro sleaze of Jess Franco. I’ve only seen a couple of Franco’s pictures (about a hundredth of his filmography, then), but his influence is readily identifiable from the freeze frame titles on in. The Duke of Burgundy is sumptuous, seductive and hypnotic, but it left me admiring from afar. Which was essentially also my reaction to Berberian Sound Studio.

It quickly becomes clear (well, at Strickland’s elegant pace, quickly is an exaggeration) that this is all at Evelyn’s behest, however. Cynthia is the reluctant and weary partner, fulfilling her role for fear of losing her younger catch. There’s a sense of inevitability that this cannot last, but a clinging on by both partners that leads to emotional impasse come the conclusion. We hear Evelyn’s repeated voiceover breathlessly state, “This is all I ever dreamed about”, yet it is very far from Cynthia’s greatest desire. Ultimately neither will be happy in their rehearsed abandon; Cynthia cannot wait to exit the room when conversation turns to purchasing a human toilet.

Strickland’s picture isn’t so complex in terms of character, although both actresses, and particularly Borgen’s Knudsen, lend great depth to their roles. Like the distracting and possibly or possibly not relevant study of Lepidoptera, sequences play out in miniature and through repetition. So Strickland creates a rhythm that is both fascinating and detached. This may be the intent. We study the characters just as they study moths.

There’s a deadpan sense of humour too, such that, while the emotional centre is quite sad and affecting, there’s a sense that this is all an elaborate game to Strickland (another thing he has in common with Greenaway; intellectual remove). He has created a world of undefined era, one apparently matriarchal to the extent that there isn’t a man to be seen. But for no discernable reason. And there are mannequins sitting in the audience at lectures (apparently a nod to Franco). I particularly liked “Featured Insects in Order of Appearance” during the end credits.

Like Berberian Sound Studio, the soundscape of The Duke of Burgundy is fascinating, sometimes resembling like a Doctor Who sound effects record (except the subjects are macro-acoustic moth sounds). Both pictures feature a central figure isolated at their centre, one by work and the other by pleasure. Strickland’s films are to be admired, and Nic Knowland’s cinematography is to be venerated, but they lend themselves to respect rather than adoration. 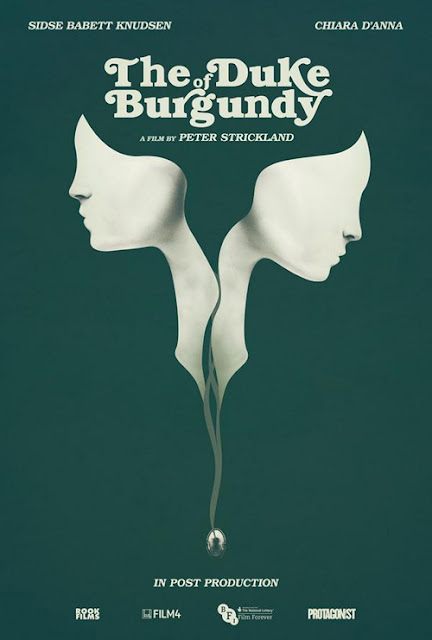