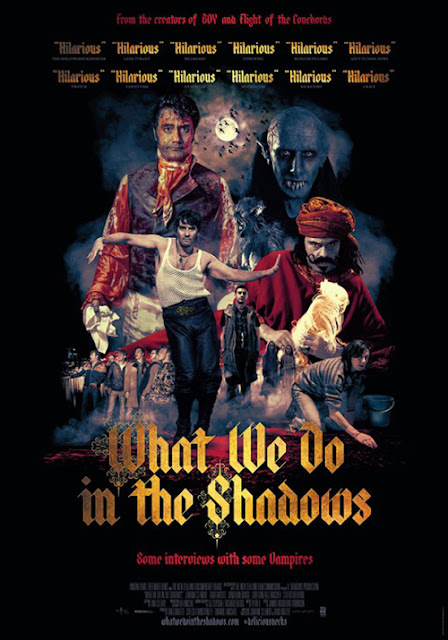 (SPOILERS) The persistent problem of the mockumentary is sustaining its premise. There’s a reason This is Spinal Tap is the unassailable high water mark, because the subgenre lends itself too readily unfocussed improvisation and narrative. How many respected but forgettable Christopher Guest ensemble vehicles are there? A random collection of scenes stuffed together, even if they are mostly funny, can quickly become tiresome or listless. What We Do in the Shadows, a New Zealand fly-on-the-wall about centenarian flat-sharing vampires, is wisely short, snappy and well-versed in the genre it is riffing on, but it comes at a point where the spoof doc has all but run its course. It’s difficult to do anything interesting with the form, and What We Do in the Shadows doesn’t; it’s content to wit-quicked but is only occasionally inspired. 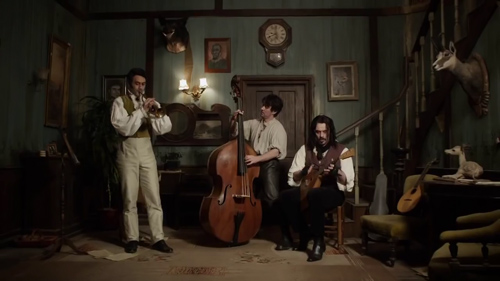 Shadows is the long-gestating (getting on for a decade) brainchild of Jemaine Clement and Taiki Waititi. Post-Flight of the Conchords (in which Waititi made a solitary appearance) the former has etched himself out a reliable career as a supporting player (and voice) in a series of Hollywood pictures. Most identifiably in Men in Black III, but his vocals have been rightly recognised as something to be celebrated, hence cherishably evil Nigel in the Rio pictures. 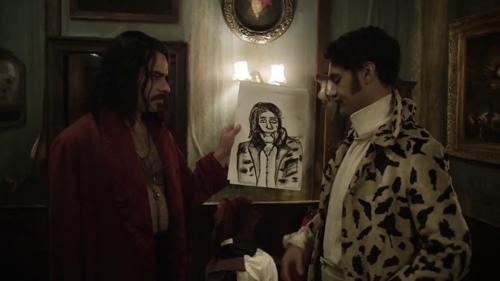 Clement also starred in Eagle vs Shark, Waititi’s first feature, an oddball romance that was much acclaimed but I found merely so-so. Waititi’s the weak link here performance-wise; he’s not a disgrace or anything (his continued inability to avoid hitting a main artery of his victims, so ruining mealtime, gets several bloody laughs), and no one here has the sheer presence of Clement (Vlad, 862 years old). But nor is Waititi’s dandy Viago (379) as memorable as Jonathan Brugh’s Deacon (183) or Ben Fransham’s Nosferatu-like Petyr (8,000). He’s not even as notable as the humans, Nick (Cori Gonzalez-Macuer, who becomes a vampire and can’t stop blabbing about it; “I’m the main guy in Twilight”)) and Stu (Stu Rutherford, whom the other vampires like much more than Nick once he has been turned, and who eventually becomes a werewolf). 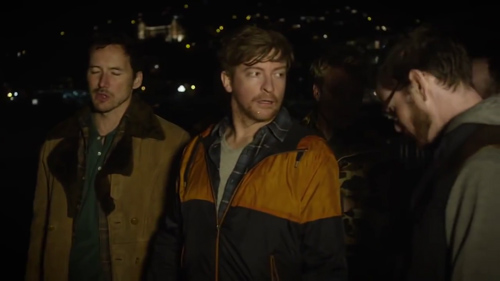 Yes, the werewolves (not swearwolves). They are led by Conchords regular Rhys Darby as Anton. Anton’s an amusingly unlikely werewolf pack leader, since Darby is trotting out his accustomed turn. Aton is wholly anal, and more akin to a line manager than someone apt to tear one limb from limb. The vampires vs werewolves sequences are a rich source of comedy (“We’re just about to walk past some werewolves, so some shit might go down”; “Please don’t lick anything or pee on anything” they are asked on entering the vampire home). The biggest laugh has police blame a poor dog for a werewolf dismemberment spree (“Look at what you did”). 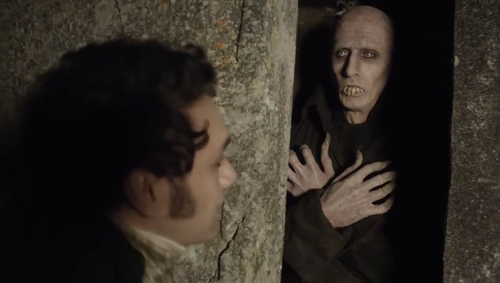 As expected, the vampire gags mostly come down to contrasting the mundanity of everyday existence with the quirks of blood sucking. Deacon never does the washing up, like an unruly student. Petyr leaves a mess on the basement floor (including a spinal column). There is a general reluctance to put down newspaper or towels before feeding, and Vlad “tended to torture when I was in a bad place”. 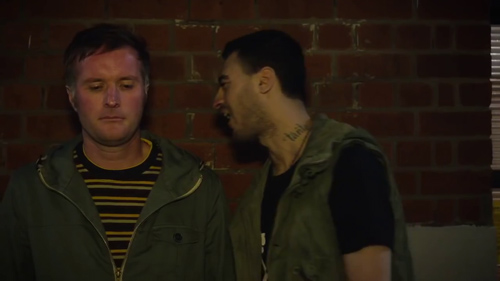 Vlad was turned at 16, accounting for his appearance (“of course, in those days life was rough for a 16 year old”). Deacon “was a Nazi vampire” (surely a reference toi recent Nazi zombie movies). There’s a delight in self-delusion (“When you are a vampire, you become very sexy”) and the damp squib limits of their extraordinary powers (they can make spaghetti appear like live worms – “we stole that from The Lost Boys” – , but not chips, as it “only works with things that already look like worms”), and Spinal Tap-esque clueless logic (“We’re the bait, but we’re also the trap”). On a night on the town, they have to ask bouncers to invite them into bars. Child vampires are asked “You going to kill some perverts?” 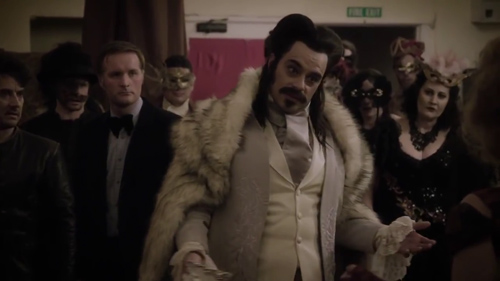 The main sequence, The Unholy Masquerade, is a ball attended by vampires, witches and zombies (“Are you predeceased?” Stu is asked). It isn’t as creative as the previous vignettes, although the twist that the Beast (“She prefers ‘Pauline’”) is an ex-girlfriend of Vlad’s is amusing. 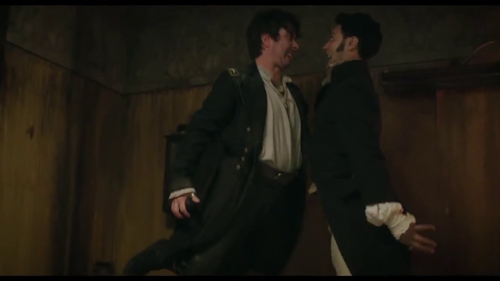 Effects are mostly effective, and funny (which is more important). The flying sequences are used to highlight the more uncontrollable aspects of flying harnesses, while the transformations into bats are nippy. Vlad’s half-change into a cat (with his own face) is suitably silly/creepy, but the werewolves are wholly on-a-budget glimpses. Elsewhere, Nick vomiting torrents of blood after eating a solitary chip is more in your Apatow vein of bodily function humour. 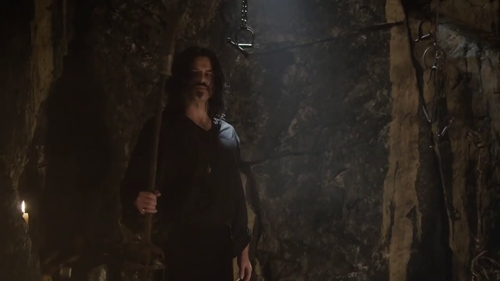 The picture is rarely more than thirty seconds from a laugh, but it’s nevertheless unable to escape from the fact that it is structured in piecemeal fashion; it’s always very evident how scenes have been conceived, constructed and edited, so What We Do in the Shadows, despite being consistently chucklesome, ends up wearing its conception on its sleeve in a manner This is Spinal Tap avoids.