Everything is everyone’s fault. 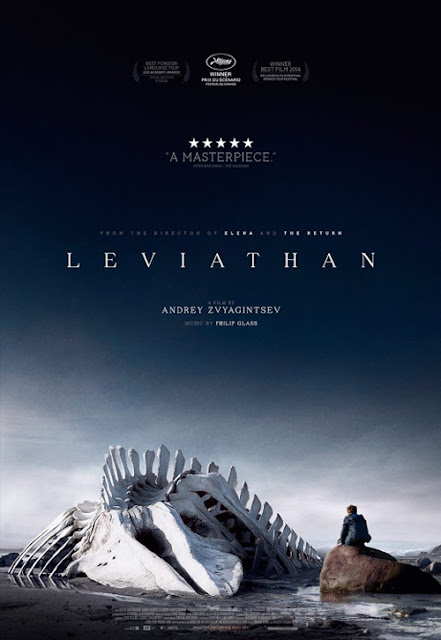 (SPOILERS) Andrey Zvyagnistev’s tale of misery and despair is the sort of sunny fare one typically expects from Russian cinema. Taking its cues from the Book of Job, the director has fashioned a bleak and persuasive vision where persevering through suffering and loss yields no ultimate reward; indeed, punishment elicits further punishment. The powerful get more powerful, while the impoverished are ground under foot. God has no place in this universe, except as a totem of the religious structures using his iconograpy to support the state.

The picture, partially funded by the Russian Ministry of Culture, was subjected to criticism from its Minister for its cynical view of a country inflicted with an utterly corrupt system and a populace fuelled by vodka. Naturally then, western media has seized this upon this, since Putin’s Russia being held in new lows of regard. One wonders if this wasn’t partially the reason for its Best Picture Oscar nomination; the chance to use a picture from and financed by his own government to dress the President down.

Leviathan isn’t going to change anyone’s preconceptions on Russian fare (“Always full of women staring out of windows, whining about ducks going to Moscow”), although the amount of alcohol consumed here would make even Withnail blanche. This isn’t a picture populate by likeable protagonists; the most sympathetic character is driven to suicide following an affair with her husband’s lawyer. There’s no new dawn to look forward to in this dying coastal town, where handyman Kolya (Aleksei Serebrayakov) is unsuccessfully fighting Mayor Vadim’s (Roman Madyanov) order to possess his land (the only thing they have in common is a proclivity for liquor).

As his former army friend and lawyer Dima (Vladimir Vdovichenkov) tells Kolya, he’s a “hothead”; as much as chain-smoking Kolya is on the receiving end of corrupt deals and persecution, he has only as much clarity as he can see through the gauze of a vodka bottle. His young second wife Lilya (Elena Lyadova) is unhappy, isolated, stuck with a dead-end job gutting fish, prospectively consigned to an apartment that makes most squats look plush and resented by their stepson; it’s little wonder she seeks respite in Dima’s arms, leading to further ructions. When she kills herself, it’s the caustic icing on Kolya’s downfall; whether by Vadim’s direct involvement or not, Kolya is tried for his wife’s murder (“Thank God. That’ll teach him to know his place” Vadim comments on learning of Kolya’s 15 year sentence; he has already seen off Dima by staging a fake-out execution).

In the early part of the picture, Dima’s voice of reason and logic at least appears partially as a guiding light (Kolya is only comparable to Job in as much as his situation is hopeless; he isn’t comforted by any affirmations or abiding belief). Facts are most important to Dima; facts can change things. Truth will out. His bafflement with the townsfolk’s preoccupations (“Why do you all keep asking me about God?”) only becomes thematically clear as the relationship between Vadim and the local bishop in his pocket plays out. The final scenes reveal that Kolya’s house has been knocked down to make way for a new church, not the subtlest illustration of the hypocrisy of the religious edifice and the manner in which it is just another side of the same coin as government. The wiles of a Moscow lawyer have no place where the rules are disregarded and truth won’t out (although the main reason for Dima being chased out of town is presumably that he bluffed Vadim, and there wasn’t actually anyone with any weight behind the dossier he presents to the mayor).

As acutely well performed as Zvyaginstev’s picture is, understatement is not its strongest suit. Not only is Kolya cast as Job, but a priest he converses with also quotes the book as a recipe for stoicism in the face of torment. He just so happens to pick a passage featuring the leviathan of the title, and there just so happens to be an immense whale skeleton decorating the local beach, a symbol of the barebones poverty of the town and the fate of Kolya. It’s also a rebuke to the scripture, which claims that nothing can pull in such a beast – it seems the machinations of the powerful can hook it (although it’s much more evocative to see the biblical leviathan as a sea monster, rather than a common or ocean whale).

The cast deserve universal praise. In particular, Lyadova’s descent into oblivion is devastating in its claustrophobic inevitability. Madyanov is also strong portraying the mayor’s loathsome tyranny. Perhaps a problem here is that, in remaining with Kolya’s essentially unsympathetic character (drunk, ill-tempered and violent), it is difficult to fully engage with the tragedy after Lilya exits. Leviathan ends on a note of resigned inevitability, which may be a reflection of how Zvtaginstev sees his homeland. In one scene, framed pictures of former Russian and Soviet premiers are used for target practice. Kolya asks where the more recent ones are; the current office holder is conspicuously framed in Vadim’s office.