Divergents will destroy our society unless we destroy them. 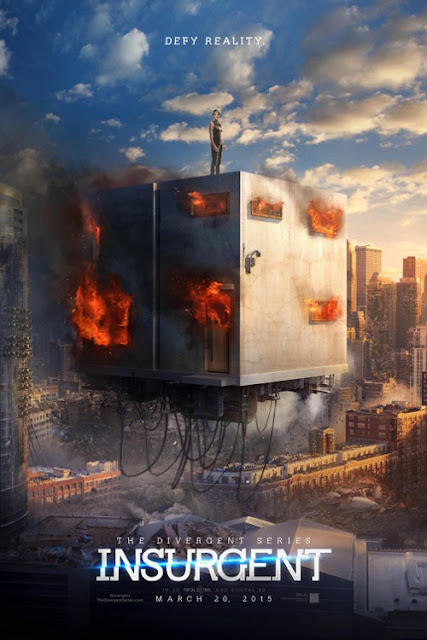 (SPOILERS) I quite enjoyed the first Divergent, mostly because Shailene Woodley gave a really strong performance, but also because Neil Burger managed to somehow drive the picture forward engagingly in spite of the nonsensical premise. Robert Schwentke picks up the reins for the sequel, and has no such luck. While the first 40 minutes are reasonable, it soon becomes apparent that Insurgent’s idea of plot progression is having Tris confront yet more bland, CGI-infused virtual realities.

I even preferred the first movie to the most recent instalment of that darling of YAs, The Hunger Games, but Insurgent really does everything in its power to support the view that the series is a poorly devised facsimile of any given dystopia, just one that’s more difficult to swallow. It will be interesting to see how the second Maze Runner does, since there was a picture that exceeded box office expectations but conversely had similar problems to Divergent in nursing negligible internal logic.

Here, we pick up soon after the original, with Tris, Four (Theo James), Peter (Miles Teller) and Caleb (Ansel Eglort) on the run. And that’s the best bit, really, with Jai Courtney well cast for a change as the psychopath on their heels. We also have Daniel Dae Kim obligingly putting Tris and Four on trial, and brother Caleb betraying sis in a subplot that’s never as potent as it should be, but for the most part this is about arch-bitch Kate Winslet trying to open an ornate box that isn’t, alas, the one from Hellraiser.

Naturally, Tris is the key; as a 100% divergent so she must take the test of being a five-quadrant faction special case, plunging into very obvious simulations and coming out with flying colours. But wait, wasn’t the whole point of the first movie that she could tell the difference between fake reality and real reality? Never mind, it’s the hook of the series, and nothing making any sense hasn’t stopped it before. As it turns out, the rather dull secret is that there is life beyond the wall and, since similar ideas have already been explored in The Giver and Maze Runner, probably no one’s that excited to find out in Astringent Parts 1 and 2.

For which, it appears Naomi Watts will be cashing the cheques Kate has surrendered, probably not the lesser of two evils son Four (no shit she had him young) hoped. Also back, poor Miles Teller who would prefer to make better use of his time (he shouldn’t be so miserable, he make more of an impression here than in Fantastic Four and gets the few witty lines).

Lionsgate must be licking their wounds a bit, wondering what went wrong with this series. Divergent was no Hunger Games, that was clear off the bat, but they probably had a reasonable expectations the franchise would find a growing audience, rather than a more expensive sequel to negligible extra return (slightly more globally, slightly less US). This is the studio’s last cash cow YA franchise (Hunger Games ends this year), but it looks like the milk’s run dry.