Any man endangering this vessel goes out the fucking tubes! 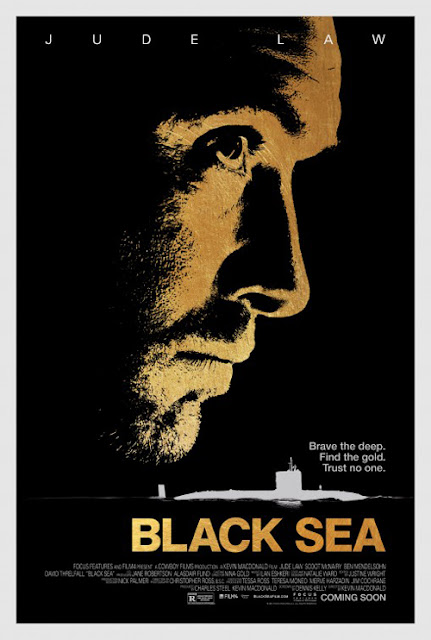 (SPOILERS) I like a good submarine movie. Black Sea has a few things going for it, chiefly Kevin McDonald getting diligently behind the inherent claustrophobia and tension of being cocooned in a great watery coffin, but it’s continually hamstrung by Dennis Kelly’s ridiculous script, which does its best to undermine any investment in the characters and their goal, a stash of Nazi gold in sunken U-boat beneath the Black Sea.

Kelly came up with Utopia, which, for its first series at any rate, was intriguing and different, so maybe he should be given some slack. Or maybe not, since he also contributed to Pulling. Laid off by his salvage firm, Jude Law’s Robinson (or McRobinson; you can tell he’s Scottish on account of his accent, which some have not unfairly compared to Groundskeeper Willie from The Simpsons) promptly has the prospect of rescuing $40m in gold from a U-boat sunk off Georgia thrown in his lap. Of course, it’s a dangerous exercise, requiring the salvagers to avoid the Russian navy. He picks a mixture of British and Russian crewmembers, having secured the backing of a mysterious financier (Tobias Menzies) and obtained a rusting hulk of a sub, and off he goes.

So at least the picture doesn’t waste any time sailing forth. Unfortunately, its shorthand also evidences just how rudimentary much of the motivation here will be. “He’s a psychopath” is the introductory comment on Ben Mendelsohn’s Fraser (Ben Mendelsohn, playing a nutter, whatever next?) “But a good diver” responds McRobinson. Which gives Kelly, clearly enamoured of psychos if Utopia is any indication, free licence to create any amount of mayhem that will be the death of most of the crew. If Fraser were as unstable as is shown here, it would surely have manifested before. But Kelly’s trying to do a The Treasure of the Sierra Madre thing, having gold fever gradually tip its crewmen over the edge (except the only ones who exhibit this are the dogged McRobinson and the crazy guy who’s crazy anyway).

Since there’s little in the way of externalised threat, the enemy must be from within, which means the only conflicts can come from hopelessly contrived scenarios. Along for the ride is Scoot McNairy’s duplicitous company man Daniels, who is basically Burke from Aliens right down to locking marines crewmen in with the aliens invading ocean (At one point McRobinson even paraphrases Ripley; “Men are dead!”).

Except that, when it reaches the point where he is attempting to manipulate Fraser (who has already got them into a fine mess by murdering Konstantin Khabenskiy’s Blackie for no discernible or sensible reason other than that he’s a psycho and psychos always go round murdering people in confined spaces at the drop of a hat, especially when it puts their own lives in extreme peril; he also has a disconcerting habit of crying about the danger they’re in two minutes later, which he manufactured) into killing another crewman, he seems entirely clueless as to the potential consequences. This is writing designed to progress the plot, which it does, but it’s at the expense of the remotest suspension of disbelief.

Robinson’s entire venture comes across as hopelessly ill-equipped and planned as it is, but as it happens the expedition would have worked out fine and dandy (irrespective of what would happen when they got to the surface) if only he had taken the time not to bring that meddlesome psychopath aboard. Or brought two good divers along, so the insane one could be locked up when he starts his killing spree. Still, Macdonald has assembled a strong cast. McLaw’s appropriately bulky, McNairy and Mendelsohn sing from familiarly dependable song sheets and Michael Smiley and David Threlfall give it some salty old sea dog. There are effective individual sequences too; Macdonald knows how to ratchet up the tension.

But that makes it the greater pity that Black Sea isn’t just hackneyed, it’s frustratingly aggressive in its distaste for internal logic. A sub crew on a quest for lost Nazi treasure is the stuff of great potential (as recent news stories attest), but Macdonald’s picture depth charges it.