Everyone's gotta do the Shimmy Shimmy Ya. 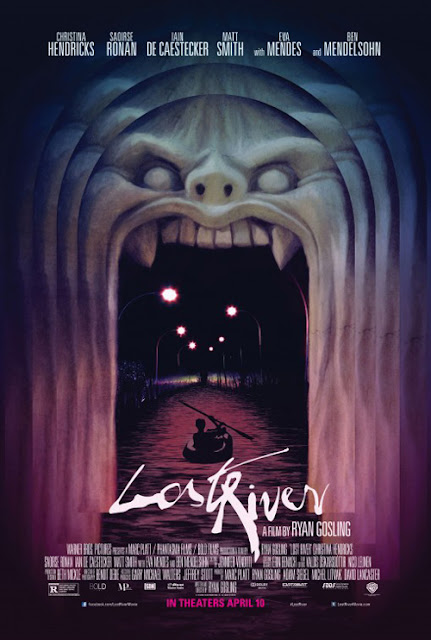 (SPOILERS) If more actors than one might expect turn out to be competent directors, it’s probably because the majority of them have very conservative ambitions in the field. The ones with the virtuosity of, say, Mel Gibson are few and far between. Much more common is the unfussy, unadorned approach of a Clint or a (Sir) Dickie (albeit less prolific in output). Those who attempt overt artistic or personal statements set themselves up for a fall, which is where the latest first-timer, Ryan Gosling, comes in. Lost River has been thoroughly lambasted, and it has to be said that it isn’t very good.

But hey, at least Gosling didn’t go down the route of respectable period piece or biopic (see Russell Crowe, Angelina Jolie, etc.) Lost River is determinedly weird, in the overt way a student filmmaker full of ideas but with little self-control is (hence the multi-hyphenate director-writer-producer). Whether he’ll be a one-time only, defeated by pillorying the way Johnny Depp was with The Brave, or even Charles Laughton, who made a classic but was defeated by its reception, remains to be seen. Lost River feels like a movie made from watching the works of other, better filmmakers (David Lynch, Nicolas Winding Refn, Terry Gilliam, all great touchstones to have) but without a sufficient clarity on what it wants to be. Other than weird.

Because it’s certainly that, just not in a terribly interesting way. The English guy off Agents of S.H.I.E.L.D. (the majority of the leads are British playing American, for no tangible reason, at least not in a “best person for the part” sense), Iain De Caestecker is Bones, who lives with mum Billy (Christina Hendricks) in a derelict part of Detroit. He salvages scrap metal, while she takes a weird stage act job from a predatory bank manager (Ben Mendelsohn, surprisingly playing a wanker, one with only the one good ear, which at least marks him out from all the other wankers he plays) in order to make the mortgage repayments to stop their house from being pulled down.

Also in the mix are Matt Smith’s imaginatively named Bully, a psychopath who terrorises the rundown locale, and Rat (Saoirise Ronan), Bones’ kind-of romantic interest who lives with her gran and owns a rat (called Nick, which makes sense, as Nick would be a silly name for a girl).

It’s a picture of two halves, the more interesting of which is the peculiar club scene Billy becomes involved in. Her first visit sees her witness a Grand Guignol performance murder to an ecstatic audience, and soon she is peeling of her face to rapturous applause (do you think this might be Gosling’s commentary on the 99% addicted to TV and the Internet, escaping their rum lots, maybe? Hmmmm?) The star performer Cat (Eva Mendes, who isn’t, but is Gosling’s paramour) introduces Billy to the basement shows, where she is sealed in a plastic body shell while a paying audience (guess who that will be) is free to behave as they will. This half-light world has the colour scheme of a Refn film and the surrealism and sexual fetishism of Lynch (think Blue Velvet) but what it lacks is any real sensibility beyond a will to odd. Lynch’s twisted sense of humour marbles his work, but Gosling is disappointingly po-faced.

Bones is involved in a different kind of escapism, one that summons the fantasising protagonists of Gilliam’s The Fisher King and Tideland; Rat informs him a nearby town was flooded to build a reservoir, and that a curse can be lifted by capturing a beast from its depths. Gosling fails to elicit any interest in this plotline, however. Indeed, the only aspect that passes mention is how glaringly unsuited Smith is to the “villain” role, pratting about, shouting like a gumby, and, in a particularly unpleasant sequence, decapitating a rat (that’s Nick, not Rat).

Tonally the picture lurches from twee sentimentalism (the TV shows suggest Jean Pierre Jeunet) to threats of violence and bloodshed (that would Refn again), without any guiding sensibility to bind them. Mainly though, Gosing’s story just isn’t any cop. If he had a really good one, he might make something interesting at some point, as there are more than enough moments and images here to suggest someone with far more potential than a purveyor of personality-free period pics or adapted works. If he’s going to be an indulgent filmmaker, though, he needs to work on why people should indulge him (even if that amounts to the scars from serving as a Mouseketeer). With the likes of Gilliam and Lynch, no one ever has to ask that question.