You will die! Like the others before you, one by one, we will take you. 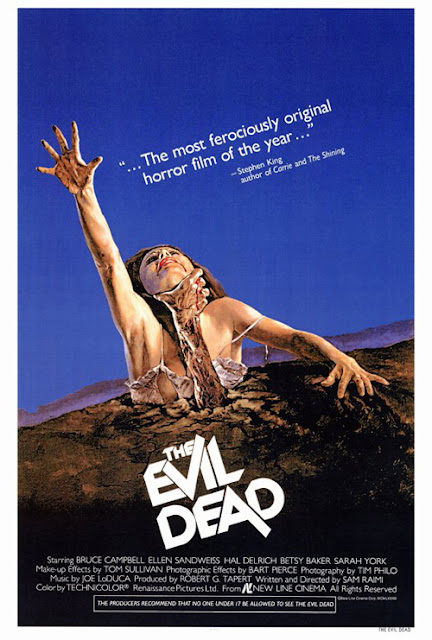 There are fairly few sequels I’ve seen before catching the originals. Aliens is one and, for a while at least (being an action orientated teenager), I preferred it to Ridley Scott’s clearly superior singular first outing. Evil Dead II: Dead by Dawn is another. It was a picture I didn’t catch until about five years after its release, never having been much of a horror buff, and being unconvinced by attestations to its comedy value. When I did get round to it, I was bowled over, and promptly had to investigate Sam Raimi’s shoestring predecessor. And I was desperately disappointed. So much so, this is the first time I’ve glanced at The Evil Dead since. Was my first response unfair? No, not really. 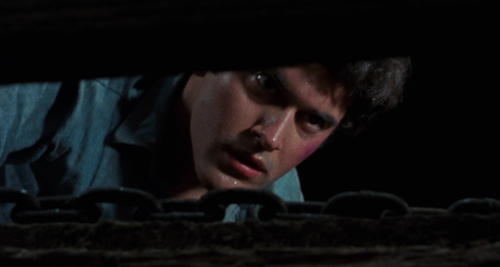 It’s probably true enough to say that The Evil Dead is to Evil Dead II what Mad Max is to Mad Max 2, except that the first Max has significant merits in its own right as an exploitation/horror/revenge movie. In both cases, the tools, resources and fundamental approach shifts markedly between sequels, however. Raimi’s original is a fairly straightforward, no-frills cabin-in-the-woods movie, where five young people go off for some R’n’R only to discover the presence of the Book of the Dead and have Candarian demons unleashed upon them left, right and centre. Essentially, Raimi’s foot-in-the-door approach of recognising the best way to make a splash debut was to do horror results in his unashamedly going for it in every department, not least the determinedly copious gore/grue effects sequences, where the picture stops in its tracks to show them off. 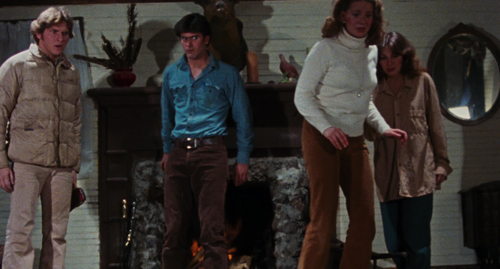 There’s a lot of energy and enthusiasm on display, as you’d expect from a director who is nothing if not kinetic, but if The Evil Dead was ever really scary I don’t think it is now. It’s actually rather boring, a succession of mostly undifferentiated attacks/freak-outs/screaming sessions/splatter that just go on and on. There’s all manner of impressive Dutch angles on display, and there are glimpses of the wicked sense of humour that would inform the sequel; the possessed female characters get all the best lines and silliest behaviour, which one might charitably suggest (it doesn’t) makes up for such adolescently inadvisable notions as the infamous tree rape sequence. 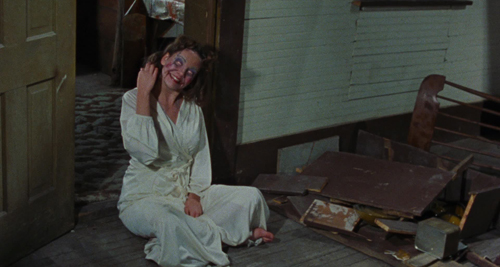 Bruce Campbell, as Kim Newman (a big defender of the picture on its initial release; as Raimi, Campbell and Rob Tappert note on the commentary track, the picture’s reputation was made in Britain, thanks to Palace Pictures’ keen marketing) comments in Nightmare Movies, macho hero Ash is “reduced to a display of whimpering collapse in the Jamie Lee Curtis manner”. But, while that cowardly custardness would be ratcheted up to mirthsome effect in the sequel, Campbell is yet to embrace his true inner-Ash here. 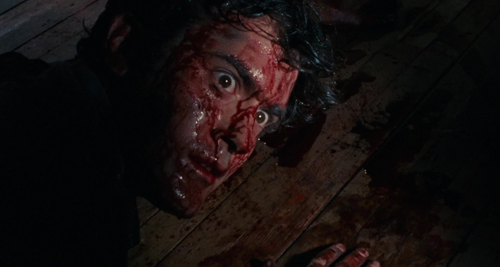 Campbell’s one of the most brilliant hams in the business, an actor with a natural flair for a cartoonish performance rarely seen (the Shat is another who can do it effortlessly). That’s a very different thing to being a bad actor, although some seem to have difficulty distinguishing between the two. But, aside from being very gamely thrown about the place, have things dropped on him and being liberally doused in all sorts of goo, and screaming commendably, Ash is pretty straight here. Without Campbell’s arch bluster, there’s nothing to drive the show forward, and all the tricks Raimi throws at the screen can’t actually make the proceedings very interesting. You can hear a line like “Scott, you’re going to be okay, you’re going to be just fine. You’ll see” delivered by Dead by Dawn Ash as hilarious, but, even given that the guy Ash is talking to is clearly not going to be okay, it’s not. 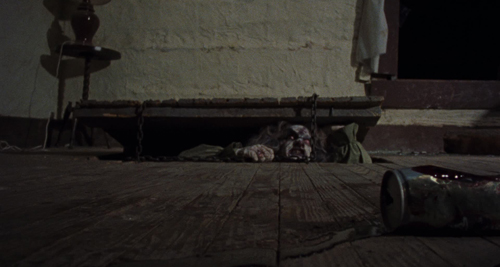 Raimi’s signature Evil Dead moves, his pursuing demon camera, crazy angles, Three Stooges sound effects, slapstick violence and giggling ghouls are all there, just not yet infused with his comic sensibility.   And Ash is very much Ashley here, he won’t be groovy for another half decade.