I went from killer to cashier. Don't tell anyone. 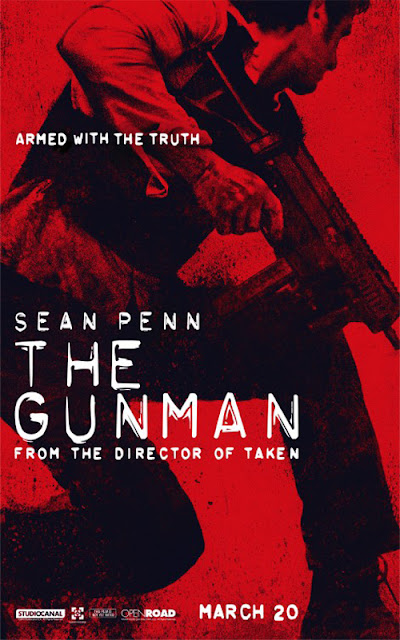 (SPOILERS) What were you thinking, Mr Penn? Particularly since you share co-screenplay credit. The Gunman is about the worst example of pampered Hollywood expressing its social conscience-easing behaviour one could imagine, as Sean’s reformed assassin plotline forms the backdrop for saying some important things about humanitarian aid (good) and big corporations (bad). Which is fine as a message, I’m with you there Sean, but finance a searing documentary about capitalist exploitation would have been a more convincing avenue with which to express yourself, rather than throwing $40m into in this sloppy, third-rate concoction, one that operates more as a bizarre vanity vehicle than anything approaching an indictment of corrupt business practices.

Penn’s Jim Terrier is former special forces, equipped with terrific abs (which he is contractually required to display as much as possible, while chain-smoking; I guess this is understandable if you’re in you’re mid-50s and going through a mid-life crisis) and a reasonable aptitude for surfing. He’s also a kick-ass assassin, posing as an aid relief employee. Following a black-ops venture in the Congo, in which Terrier shoots the Minister of Mining in order to ensure his employer’s contracts are not renegotiated, conflicted Jim drops from the radar. Six years later, he has become a charity worker, digging wells (I shit you not; now you can see why Sean developed the abs; it’s basically a Stallone screenplay, Penn’s Rambo III, if you will). But his former life is catching up with him, and it isn’t long before he’s luxuriating in a glorious bath of ultra-violence. And flashing those abs.

Everything about the screenplay, credited to Penn, Don Macpherson and Pete Travis and based on The Prone Gunman by Jean-Patrick Manchette, is an embarrassment of horrifying clichés and crude punctuation. It’s all the more bizarre that talent like Javier Bardem, Idris Elba, Mark Rylance (Mark Rylance!) and Ray Winstone (well, maybe not so much Ray “The Sweeney” Winstone) should appear in this crap. Possibly the persuasive powers of Le Penn.

Presumably he also ensnared poor Jasmine Trinca, whose work I was unfamiliar with but who is essentially required to stand by her man, a morally unconscionable psychopath who doesn’t think twice about his behaviour until he does, even when, or because, he announces “I can’t ask you to forgive me”. When Jim initially absconds, she takes second-best Bardem, artlessly identified as muscling in from the first moment we see him and even more artlessly identified as an imbecilic alcoholic who helpfully gets himself shot when Sean comes back on the scene.

Elba hardly features, but he does sit on a park bench with Jim, imparting some wisdom about when and when not to build a treehouse, and doesn’t want to hang him out to dry, which is incredibly charitable. Rylance, in an entirely pitiful bad guy part telegraphed as such, as every plot point is, is naturally moderately watchable simply because he is Mark Rylance, even when getting shot in the hand. Less so when getting gored by a bull, in a finale of ludicrously poetic and metaphorical proportions (Sean is the put-upon bull, don’t you see? DO YOU NOT SEE?) Winstone meanwhile, plays Ray Winstone, and, to his credit, he does the best Ray Winstone out there.

Jim may have done horrible things, but he’s broken up about it, suffers from PTSD and is full of regrets. Some, but not all, of these things lead to dizziness and vomiting. Most of them lead to bone-crunching or flesh-shredding mayhem as Terrier proves an unstoppable force, dogged even, bringing about peace through extreme measures. A particular highlight sees Jim abruptly punching a friendly neighbourhood mum on the nose, only for her to be revealed as a vicious, hypodermic-wielding hit woman.

Pierre Morel, despite the crushing unsubtlety (a field he has already ploughed with Taken) knows his way around an action sequence, but it’s disappointing to see him stuck with this mess, when a few years back there was a chance of him taking on Dune. In particular, Jim’s bruising battle with Number One Henchman Peter Franzen, actually instils the movie with something approaching urgency for a couple of minutes. He clearly needs a better agent. And Penn needs to get over the idea that he’s the silver screen’s answer to Bono (what with his perma-shades and endless capacity for righting wrongs). The Gunman might have had something to say in conception, but only ends up saying anything about Sean’s ego; when Joel Silver is barred from an editing room and the picture still ends up lousy, it’s the producer-actor-star who warrants the blame.