After all these years I was willing to let bygones be bygones. 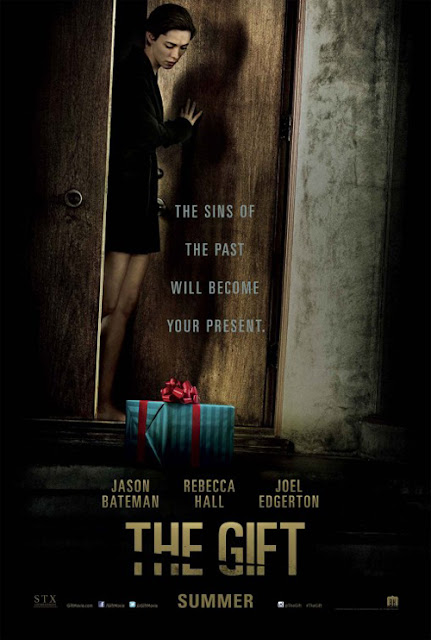 (SPOILERS) Joel Edgerton’s feature debut as writer-director (he has several prior screenplay/ story credits, including The Rover) showcases the also-starring actor’s deft touch with the thriller genre and evident facility with his cast, eliciting an outstanding, against-type turn from Jason Bateman. One does wonder, however, if he’s a better ideas man than deliverer of a finished screenplay, as this might have been improved with a few more drafts.

Certainly, Edgerton has studied the suspense masters, or at very least late ‘80s/ early ‘90s domestic psycho thrillers (Fatal Attraction, Sleeping with the Enemy, Single White Female, The Hand that Rocks the Cradle etc.) for his approach to shock tactics, and possibly also the much venerated and recently remade Korean picture Oldboy for cues on how to unspool a revenge tale based on childhood traumas.

Bateman’s Simon returns from Chicago with wife Robyn (Rebecca Hall) to begin a new job, and almost straight away bumps into school associate Gordo (Edgerton). Gordo’s a strange fish, hence his “Gordo the Weirdo” class nickname, and he begins inveigling himself in their lives, turning up unannounced, buying them fish and generally making Simon ill-at-ease and Robyn unsettled, the latter mostly over Simon’s responses to his old chum.

So far so psycho, and the best card in Edgerton’s pack is teasing out the unfettered weirdo angle until the halfway mark, before a reveal brings Robyn’s world crashing down about her ears; much loved Simon wasn’t just the “Simon says” class president, he was a resounding bully, responsible for a lie that destroyed Gordo’s life. Confronted, Simon merely confirms what we already know (because it’s been fairly obvious in the way he talks to others, belittles Gordo and generally presents himself) but Robyn has somehow been blithely unaware of; “The world’s full of winners and losers” he explains, and Gordo has only himself to blame for miring himself in a moment of ancient history.

The problem is, while Edgerton offers the mechanics of suspense in a diligent fashion, he can’t help telegraphing or over-stating story and character beats, ones that would have been more impressive if more subdued.  Simon is evidently a sociopath, crying crocodile tears to Robyn on his return from beating on Gordo, but that scene itself is a little too on the nose, presenting the bully as back in the playground. So too, the absurd convenience of Simon, at the same time Gordo is enacting his revenge strategy, indulging a ruse at work in order to get a contract/job, is too much sauce; we don’t need it, and Edgerton likely included it mainly to provide a grounding and justification for Gordo’s behaviour in the present; Simon still does this kind of thing, so he deserves it.

Because there’s no doubting Gordo is off his trolley (a deleted scene on the Blu-ray release provides some insight into the architecture of his strategy), a guy who spies, kidnaps dogs, breaks into clients’ houses, kills fish, drugs Robyn and leaves video suggesting he may have raped and impregnated her, just to deliver a very schematic lesson in how east it is “to poison other people’s minds with ideas” (that coda deleted scene suggests he didn’t, but drawing the line doesn’t make him some kind of good guy). A function of Edgerton’s over-deliberate narrative is that Gordo’s every conceit is telegraphed; we don’t need the coda because we already got the message that he left the client’s residence promptly after Simon and Robyn arrived as guests in order to eavesdrop on them, and that Robyn faints because she’s been drugged.

One of the problems here is that by dint of the structure, Robyn is necessarily made to look an idiot, caught between two men, both of whom are entirely unwholesome, and sympathising with both at various points. There’s also a sense that Gordo’s more bunny-boilerish behaviour pushes the picture too far into the OTT Hollywood thriller realm, where anything goes, when it has been playing with some potent and and resonant themes.

To that extent, where the picture works best is with Bateman’s Simon, even if his unravelling reaches a too-convenient rock bottom thanks to the dovetailing of two separate conspiring elements. Edgerton is solid as Gordo, but nothing more, while Hall gives it her all in a rather thankless part. Even given its excesses, though, I preferred The Gift to Oldboy; sacrilege as it may be to speak adversely of that picture, I was left nonplussed by its wearing of absurd narrative twists as a badge of pride. If Edgerton decides to take up directing full time, though, he’s probably got a solid career ahead of him.