I can’t even see what’s good any more. 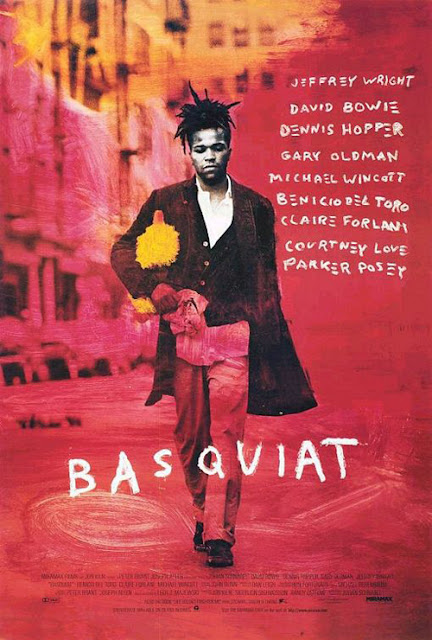 Julian Schnabel’s directorial debut Basquiat unsurprisingly wallows in the world of the sensitive artist, being one himself (once, rather modestly, and elegantly, claiming he was “the closest thing to Picasso that you’ll see in this fucking life”). Indeed, he was part of the New York art scene he depicts in this biopic, personified in Gary Oldman’s character. The film’s a rather meandering, listless affair, as one might expect from a self-involved and cossetted creative sensibility, but it’s kept afloat by a sterling central performance from Jeffrey Wright as the titular force and a series of interesting supporting players, not least one David Bowie as Andy Warhol. 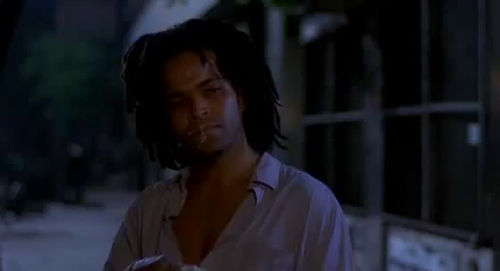 Bowie actually steals the picture whenever he’s on screen, ensuring his version of Warhol is the funniest space cadet you could imagine. Never quite in the present, he’s the mentally absent progenitor and culprit responsible for the commercialised art scene New York has become, and, whether its arguing where Saddle Row is with a fellow diner (New York or New Jersey), recalling his pet ducks (“We called them the Garcia Brothers”), or holding forth on the merits of piss-painting (“Oxidisation art”), Bowie consistently lifts the picture out of its staid self-importance. 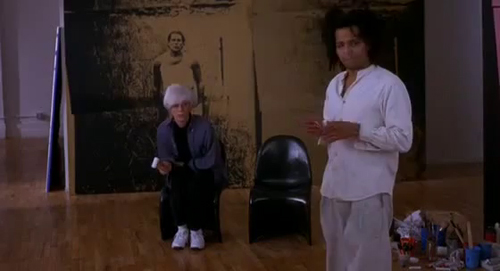 I don’t know very much about Basquiat (I have to admit, this hasn’t inspired me to learn more), but one would get the impression that, despite Schnabel’s comments about knowing what it’s like to be attacked and judged as an artist, Basquiat’s fame was more a result of being foisted upon a receptive market than because of his spontaneous talent. At times he’s portrayed as some sort of innocent savant, too pure for the world in which he finds himself, his perspective illustrated by grainy video footage and the unsubtle period strains of The Pogues and PIL. Michael Wincott (great to see him not playing a snarling villain for a change) as Rene Ricard announces “I will make you a star” and just like that Basquiat is. In contrast, Willem Dafoe’s electrician self-protectively pronounces “I’m glad I never got any recognition. It’s given me time to develop”. The seductiveness of being an unsung genius is the first thing mentioned in the picture, invoking Van Gogh,and Basquiat’s path is painted as a victim of the fame that ate him alive and encouraged his narcotic habit (Wright considered Schnabel made the artist appear too much the victim). 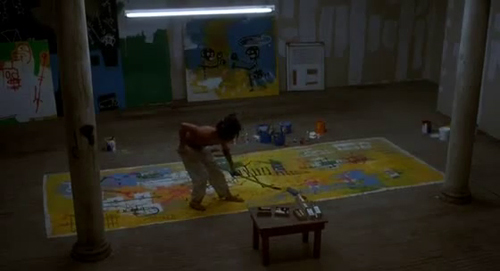 Curiously, while Basquiat is presented as perma-stoned, there’s little in the way of presentation of his heroin addiction; he takes drugs with Benicio del Toro’s Benny Dalmau and requires resuscitation by Claire Forlani’s Gina (Forlani’s very good, but it’s a token role) but mostly meanders along unscathed, with the odd mention of his corrupted complexion. All the hard work seems to be done by Wright, and its director tackling stronger subjects such as racism (via the responses to a dinner party at Basquiat’s solitary presence in the restaurant, and Christopher Walken’s interviewer) feel rather clumsy. One comes away from the picture curiously unmoved, impressed by the performances but sensing that, intentionally or otherwise, Schnabel has merely essayed a world of artifice he is also a part of, one that lacks substance and thrives on vague pseudishness. Can currently be found on YouTube.