Is that an avalanche? 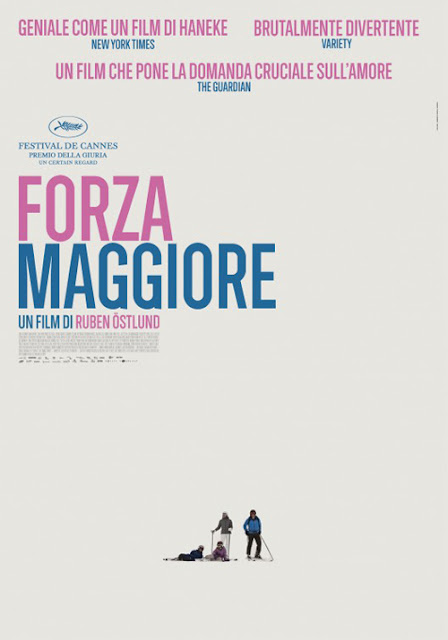 An arresting premise isn’t everything. That’s the major takeaway from Ruben Õstlund’s Force Majeure, a darkly humorous study of the fallout from a supreme act of cowardice/self-preservation on a family on a skiing holiday; dad flees an oncoming avalanche, leaving his nearest and dearest to be engulfed.

I say darkly humorous, as that’s clearly the intent (witness the use of Vivaldi as scenic punctuation points, signalling grand folly), but I found the proceedings overwhelmingly monotonous rather than astute or insightful. We can see Tomas (Johannes Bah Kuhunke) is a self-involved parent right off the bat, one who spends little quality time with his family. It doesn’t come as that much of a surprise when he legs it after a controlled avalanche comes a bit too close for comfort, leaving wife Ebba (Lisa Loven Kongsli) and two children to be enveloped in icy fog. Once the coast is clear, Tomas saunters back to their balcony seats as if nothing has happened, and it takes Ebba a spell to actually verbalise her disdain for his behaviour. Which he denies (“I don’t share that interpretation of events” he says repeatedly, attempting to reduce the experience to a mere difference of emphasis).

Various conversations with other couples further explore what undoubtedly is a strong kernel. Mats (Kristofer Hivju, readily recognisable from Game of Thrones) and Fanni (Fanni Metelius) are themselves infected by the implications of the event (“So maybe you planned to go back and dig them out?” Mats offers, ridiculously), as Fanni suggests Mats might have done the same thing in that situation.

But Force Majeure never really grasps hold of its idea. Õstlund’s approach is too distancing to turn this into a piece where we really analyse our own motives. Tomas’ act is so comically chicken-livered, it has little resonance as something that might make us question how we would respond, and the attempts to break down notional masculine ideals lack depth (“I’m a bloody victim of my own instincts!” cries Tomas over-dramatically). There are some curious little moments; a drone plane the family have bought, which suddenly flies into Mats in the living room, may be intended as a metaphor for how we remove ourselves from reality, and thus have no capacity to deal with life-altering events when they slap us in the face. Or it might just be a daft bit with a drone.

Later, a pretend rescue is played out to “empower” Tomas (which ironically leaves the kids on their own while he plays white knight to Ebba), and a final scene with a bus driver who has watched The Italian Job one too many times appears to be suggesting Ebba is also capable of rash responses. Acclaimed as Force Majeure has been, I found it determinedly unengaging, apparently intent on eschewing anything truly thought provoking. Instead of this, you might want to check out the Seinfeld episode The Fire, in which George bundles women and children out of the way to escape a kid’s party when he thinks there’s a blaze in the building. It’s actually funny, and covers the same ground in a sixth of the running time.