It is my intention to astonish you all. 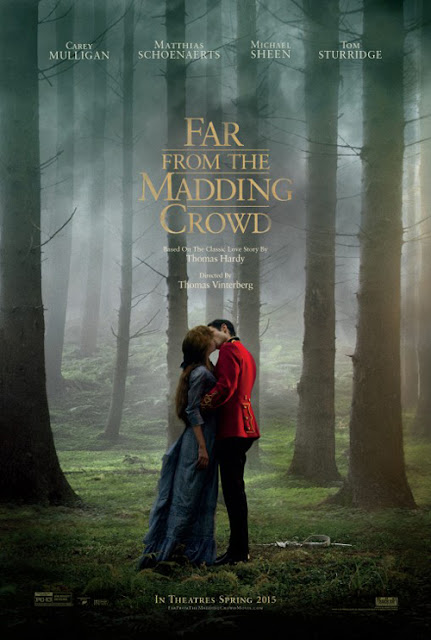 Far from the Madding Crowd is just/yet another prestige heritage adaptation, but one might have expected something a little less perfunctory from Thomas Vinterberg, director of the nuanced The Hunt. His film feels like it has been stripped to its bare essentials, while furnished with a populist weightlessness that robs it of any depth or emotional substance. It’s a popcorn classics production.

Admittedly, my knowledge of Thomas Hardy’s novel extends no further than John Schlesinger’s 1967 big screen version, but since I rather like that one, and it didn’t seem like it had come off a conveyer belt, I at least have a point of comparison. Vinterberg’s film is blandly photogenic and, while Carey Mulligan’s chirpiness is well-disposed to Bathsheba Everdene, she is let down by rather staid support who do little but go through their paces, from Martin Sheen’s shotgun-wielding spurned elder suitor to Tom Sturridge’s utter bounder Frank Troy. The first moment you see the latter, you know he’s a frightful hound, although that may be down to Sturridge’s weasely visage more than anything; either way, Bathsheba should need no warning from Matthias Schoenaerts’ oak-solid Gabriel on being wise to Troy’s failings as a specimen of humanity. Schoenaert’s performance as sympathetic hunk is never quite believably angelic, and the uninspired arrangement of characters and types ensures the outcome is never more than a predictable fait accompli.

So much so, as Far from the Madding Crowd progresses it is reduced to a prettified obstacle course for Bathsheba to eventually find her right man, the broad strokes reducing her to a groaningly incapable/dumb headstrong girl in matters of the heart while getting behind her enthusiastically as an independently-spirited career woman when it comes to farm management. The landscape lacks the character with which Nicolas Roeg imbued Hardy; this looks like any other latter-day countryside piece, with the colour dialled up in post to glow abnormally. Albeit, the picture never remains still long enough to let us take in its surroundings.