You need chaperoning, and I'm the chaperone. 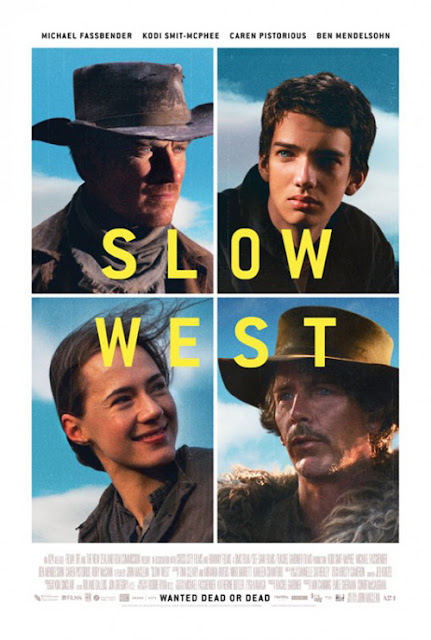 (SPOILERS) It makes sense that Slow West, a beguiling, oddball and melancholic little western arrives courtesy of one of the guiding lights of The Beta Band and The Aliens, whose songs were beguiling, oddball and melancholic. John Maclean’s feature debut reunites him with Michael Fassbender following several short films together, and it’s the kind of fractured, eccentric vision of the Old West redolent of Jim Jarmusch’s Dead Man. 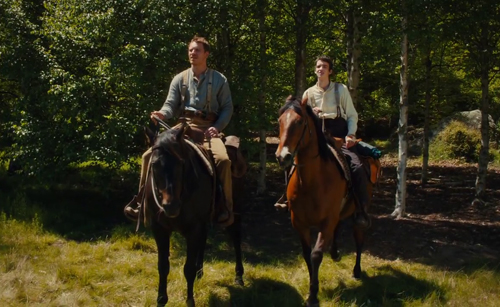 There are no doubt other filmmakers who will come to mind watching Slow West, including the Coen brothers, Wes Anderson, and the vibrant colour schemes of Jean Pierre-Jeunet. But Maclean doesn’t come over as an imitator; his western is very much its own thing, an off-kilter odyssey in which Kodi Smith-McPhee’s innocent gentry Jay Cavendish is guided across an eclectic landscape by Fassbender’s bounty hunting “brute” Silas Selleck. The object of Jay’s quest is his love Rose Ross (Caren Pistorius), who fled Scotland with her father John (Rory McCann) following a fatal accident involving Jay’s father. Jay’s motives are pure but misguided, while those of everyone else hunting the Rosses (for a $2,000 rewarded) are impure but clearly motivated. 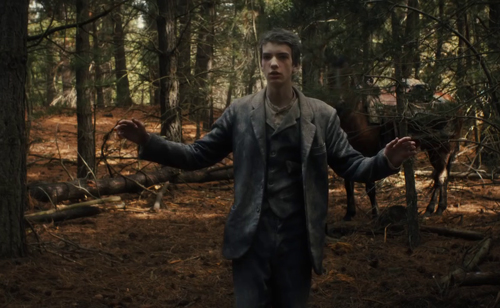 Maclean’s starting point was his observation that all characters in westerns tend to sound American, rather than reflecting the strong immigrant reality. While no one would accuse his film of reflecting any kind of “reality” of the West, it does continually reference the divide between what we imagine and what is “true”. It is ironic that Jay, who has arrived uncorrupted in a violent land (as Silas keeps telling him it is) traverses it almost angelically protected – barring theft – until he happens upon his intended (in coincidental parallel to Fury Road, at one point he stops an arrow with his) … who shoots him, thinking he’s one of the bounty hunters come to get her. And then she doesn’t even realise it is him until he has lain there bleeding out for a spell. As she says to Silas, “His heart was in the wrong place” something both Silas and Jay’s own subconscious attempted to impart (he dreams of Silas and Rose making domestic together, which becomes the final scene). 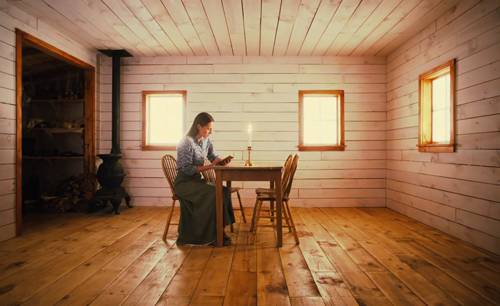 And their domestic world comes with an instant offspring, the kids Jay leaves parentless when he shoots their Swedish mother; one can’t see Jay as being punished for this, but certainly his downfall comes from lacking the tools to deal with this world (Silas attempts to calm the young woman and even bounty hunter Payne, played with a little less creepy malevolence than usual by Ben Mendelsohn, takes the children with him when Silas and a reluctant Jay leave them behind). When Jay tells three Congolese travellers “Love is universal like death” the two are destined to dovetail in the unkindest of ways for him. Werner (Andrew Roberti), a writer on the injustices to the Native American population, waxes lyrical that “In a short time, this will be a long time ago”, the selective nostalgia and romanticised mythology Maclean is in part indulging, and then steals Jay’s possessions and horse. And yet, ultimately Silas sides with the poetic dream, rather than the harsh reality ("There is more than life to survival. Jay Cavendish taught me that"). 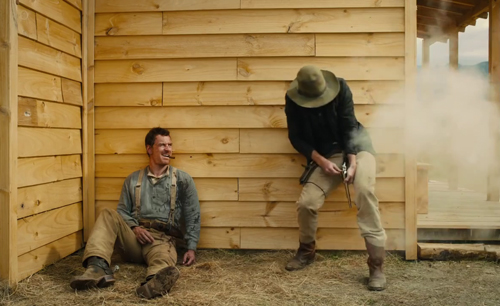 Slow West is quirky, rather than uproariously funny; skeletal arms stretch either side of a tree that has flattened its feller, one of Payne’s men tells a shaggy dog story about manufacturing a wanted poster for a colleague, Jay and Silas stretch a washing line between their horses to dry their clothes (leading to the picture’s standout moment of slapstick violence), and Silas – normally the hero of these things – spends the final shootout injured, smoking a cigar. Indeed, it’s Rose, rather than her father, who has all the common-sense about this world, which is why she and Silas end up living together and Jay and John lie dead, Maclean furnishing reminder cuts of all the bodies that have mounted up during this really not so violent movie (at least in tone). 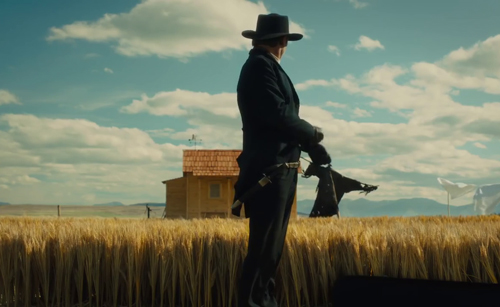 Maclean handles his action (“Kill that house!”) as he handles his landscapes, though; sumptuously, poetically, and vibrantly, making creative use of the length and breadth of the frame, and, as you might expect, the musical choices are immaculate (Jed Kurzel provided the score). Fassbender doesn’t quite look the part in his cowboy hat, but his performance more than makes up for this, and Smit-McPhee may have missed out on Spider-Man but he’s the perfect encapsulation of the innocent naif. The Ho! For the West! volume Jay carries with him might well have been the title if the Coen Brothers had made this, but there’s more feeling here than the brothers usual imbue in their work, the kind of emotional underbelly either of the McDonagh brothers might lend a western if they saw fit to tackle the genre. I’m eager to see whatever Maclean comes up with next.