Help me get rid of the foul parasite attaching itself your daughter. 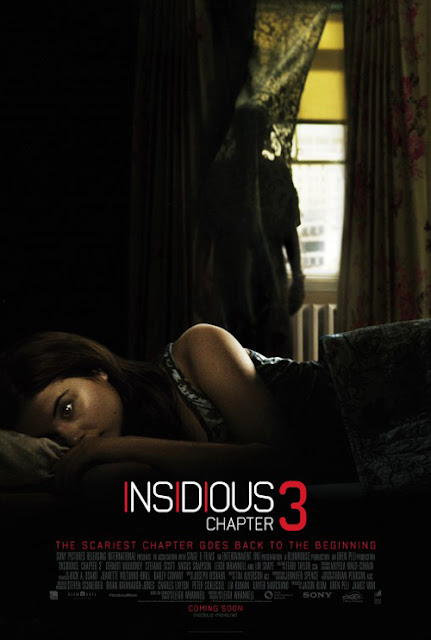 (SPOILERS) James Wan had no yen to go further into the Further with the Insidious franchise, departing for Furious 7, so co-writer and supporting actor Leigh Whannell takes the helm for this prequel, focussing on Lin Shaye’s (deceased in Chapter 1) psychic investigator Elise Rainier. On paper this sounds great, as Shaye’s distinctive performance was easily the best thing about the first two chapters, but unfortunately Whannell has assembled a distinctly underwhelming tale around her, one that offers little of interest other than joining the dots with the first film.

If we really cared how Tucker (Angus Sampson) and Specs (Whannell) joined forces with Elise, that’s on offer to sate us, but Chapter 3 mostly preoccupies itself with the haunting of Quinn Brenner (Stefanie Scott), grieving and attempting to contact her deceased mother only to be warned “If you call to one of the dead, all of them can hear you”. Cue sightings of freaky dead people and getting poleaxed by automobiles (leading to her sporting dual plaster casts on her legs, leading in turn to the ickiest scene in the picture, as a possessed state Quinn smashes off the casts and clicks around on broken limbs). Dad Sean (Dermot Mulroney, almost as prevalent a thankless supporting player as Dylan McDermott) is understandably getting worried.

It’s a good 50 minutes before he calls on Elise, though, who has sworn off spook-swatting due to being menaced one too many times by her own particular antagonistic spirit. As a consequence, this is a missed opportunity; absolutely nothing about the Brenner scenario is remotely distinctive or engaging. Even their lodgings consist of sub-Shining corridors and telegraphed sound effects, rather than carefully ladled atmosphere.

There are a few nice scenes with Shaye, including a sweet exchange where Carl (Steve Coulter), a fellow parapsychologist, persuades her she should be using her abilities, and an actually rather great Ripley-esque moment – because it’s Shaye saying it – where she confronts her demon (“Come on, bitch!”). She also has a masterful way with dialogue that world curl up and die spouted by someone else (“Help me get rid of the foul parasite attaching itself your daughter”).

Really, though, Insidious was having problems enough finding a new story tell in Chapter 2 and, not untypically of the horror genre, Chapter 3 falls too easily back on rehashing the familiar. It’s a shame, as Wan and Whannell have just the right kind of stylistic sensibilities for making intelligent scary movies, but choose to squander them with wafer thin material like this.