If you listen to me, and do what I tell you to do, we will complete this mission. 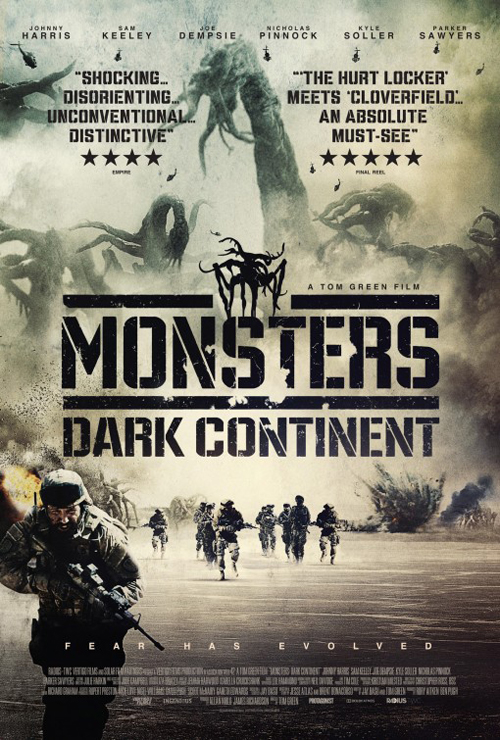 (SPOILERS) Gareth Edwards’ 2010 micro-budget Hollywood calling card was an effective little character piece set against a peripherally monster-infused world, one that earned him a rather less effective mega-budget monster movie. This sequel, in essence, has a solid notion going for it; a shared universe, but the characters, and genre-riffing, are entirely set apart. Unfortunately, Misfits veteran Tom Green’s (as opposed to the mono-testicled ex of Drew Barrymore) big screen debut shows none of Edwards’ promise. Worse, Monsters: Dark Continent stinks.

Dark Continent is a rites of passage, brutality of war movie, set a decade on from the original, with the occasional looming alien edifice on the horizon. Set in the Middle East, we follow a couple of Detroit young adults as they sign up and leaving nary a cliché unturned (“We wanted a war, and we were going to get one. We were going to have the best fucking fight of out lives”). Hey ho. Brits as Americans Michael (Sean Keeley) and Frankie (Joe Dempsie) are presented chilling, partying, shagging, firing guns and generally indulging in a noisy, uninvolving version of the The Deer Hunter’s pre-war build up. There’s one glimmer of interest, an outmatched dog-alien versus an actual dog fight, which merely makes you wonder why anyone would forward a poor pooch for such affray. Maybe it’s a comment on the futility of fighting. How should I know?

Come arrival in country, there are weak attempts at Full Metal Jacket drilling-sergeanting and Johnny Harris’ veteran team leader hauls the boys off on a search-and-rescue mission. In which they experience the hell of war and monsters. Green’s picture is both frenetic and achingly dull, without a single character or scenario to invest in. Technically, he’s hitting all the marks, but they don’t form anything of substance. As the team are whittled down to just Frater and Michael, they get a lesson in empathy from those they have come to fight; they save a wee boy! There’s cultural exchange and acceptance! Michael sits and watches a monster light show (the effects are as strong as the first film, so I guess there’s that) in what is presumably intended as a lyrical interlude. Until Frater becomes unhinged and needs putting down like a mad dog.

Monsters: Dark Continent isn’t just underwhelming, it’s actively, irritatingly banal and empty. It even has the temerity to grind patience into the ground over the course of nearly two hours, when it has no business being half that length. I think it’s safe to say there won’t be a third instalment.