Nothing kills me! I’m immune to 179 different types of poison. I know, because I ingested them all at once when I was deep undercover in an underground, poison-ingesting crime ring. 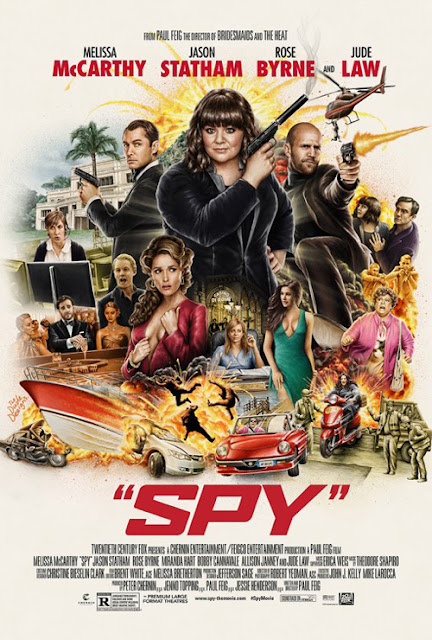 Paul Feig labours under the curse of Apatow. I don’t mean his penchant for orifice humour, although that is abundant, but rather the illusion that the perfect length for a comedy is no less than two hours. There’s a very funny movie lurking within Spy, but its definitely no more than 100 minutes long. Which is half an hour longer than the extended cut.

One of the raft of 2015 espionage movies, Spy brandishes a better Bond theme than the actual Bond movie and, in Jude Law, someone with a suavity Daniel Craig lacks (this was also true of the main players in Kingsman and Man from U.N.C.L.E, though). Feig is no action director, but then neither is Sam Mendes especially, and as a writer he sticks to a fairly unimaginative, well-explored genre-riffing template, albeit with a minor but key twist; Melissa McCarthy’s desk jockey Susan Cooper, assistant to super secret agent Bradley Fine (Law) is actually highly capable in her own right.

This is a huge step up from the underwhelming and tired The Heat, although just as dependent on formula (the MacGuffin’s a nuke) and comedy stars’ improv skills to keep ticking over. McCarthy’s obligatory faux-sincere journey is one of developing self-respect and moving beyond her infatuation with Fine; the attractive people, Fine (Law’s hairpiece is firmly in place) and Rose Byrne’s Rayna Boyanov (and Morena Baccarin, naturally) are entirely self-involved and/or obnoxious.

McCarthy is on good vulgar form, particularly when she’s called upon to be antagonist (and most especially so to Bjorn Gustafsson’s “reject from the Sound of Music” Anton; “You look like Abba took a shit and put a trenchcoat on it”). Miranda Hart, playing Miranda Hart (well, Nancy B Artingstall, but same difference) is the latest Brit comedy export who flounders in a sea of Hollywood. Byrne (“You look like an Ewok died on your head”) plays it appropriately straight as Feig’s go-to bitch (see also Bridesmaids) and Allison Janney perfectly pitches the hard-assed boss. Peter Serafinowicz gives either a good performance as a horny British spy badly impersonating an Italian agent (“Was Pepé le Pew not available?”), or a terrible performance as an Italian who can rehearse a good British spy. I’ll give him the benefit of the doubt. 50 Cent isn’t funny, and can’t act, but I think we knew that.

There’s much play on spy tropes, including gadgets taking the form of undesirable personal healthcare items such as anti-fungal spray and stool softener. There’s also copious gross-out (vomiting on grotesquely impaled corpses) and inessential unrated cut envelope-pushing (erect penises are so in at the moment).

Stealing the show, though, is the Stat as supremely incompetent and ignorant agent Rick Ford. Unrepentantly coarse (“Twot means something completely different in England”), even under threat of reprimand from the HR Department, Rick is entirely gullible (“I go into the Face/Off machine and get a whole new face”) and a font of endless tall tales about his exploits (“This arm has been ripped off completely, and reattached with this fucking arm”, he has Posed as Barack Obama; “In black face?”), and boasts “Nothing kills me! I’m immune to 179 different types of poison. I know, because I ingested them all at once when I was deep undercover in an underground, poison-ingesting crime ring”). The Stat doesn’t try to be funny, very wisely, he just winds his hard action man act up to 11 and keeps on going.

Spy isn’t dull, and a good quotient of its gags are pretty funny (although Feig’s idea of quality control appears to be to give everything a pass), but It’s just too damn long to hit a consistent stride. That may not matter with his next outing, the femme-centric redux of Ghostbusters, but it’s about time someone remembered that comedies should leave you wanting more, rather than all tapped out.

The Stath
Labels: The Stath