I look like I've been attacked by the Hound of the Baskervilles. 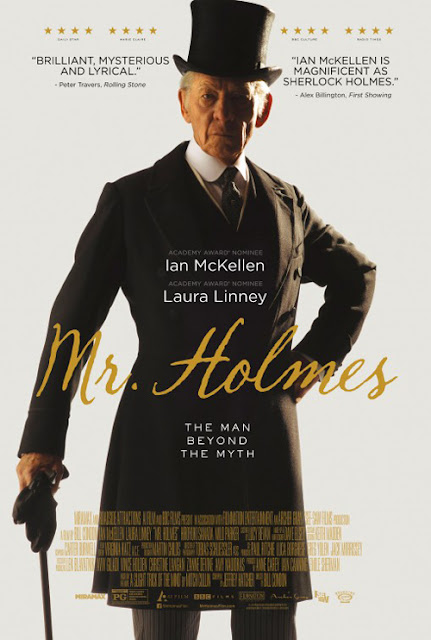 (SPOILERS) Ian McKellen’s prominent proboscis needs no adornment – after all, no one spurned Robert Downey Jr’s Sherlock over his decidedly non-Roman nasal fixture – but one can at least appreciate that his Mr. Holmes prosthetic honk is a seamless, if superfluous, special effect. Much like the mystery at the heart of Jeffrey Hatcher’s adaptation of Mitch Cullin’s novel A Slight Trick of the Mind. The key to this nonagenarian incarnation of Holmes is his much caricatured emotional dimension (or rather lack thereof, as divested of all merit in Steven Moffat’s fatuously overplayed Sherlock version) and, as antithetical to the character as it sounds, the resulting film is a warm-hearted investigation of the processes of loss and regret.

As such, the actual trappings and regalia of Sherlock Holmes aren’t exactly irrelevant, but this would be as affecting a tale without such encumbrances. Numerous doodlings regarding the differences between the literary Sherlock and the real article are, semi-pertinently, included (I appreciated the “for aficionados” presence of Nicholas Rowe, Young Sherlock Holmes, as a big screen Sherlock, a nice little homage to a film that explored the polar end of the great detective’s life), as this Holmes is suffering the early stages of dementia and thus beginning to losing his certainty over which were facts and which mere literary inventions of his past.

Hatcher/Cullin (the latter also wrote Tideland, made into a film by Terry Gilliam) pick up on Holmes’ Sussex retirement as presented in The Last Bow and The Lion’s Mane (the BBC Radio 4 adaptation of which inserted Watson into the proceedings), although they don’t quite mesh with the idea here that Holmes retired after World War I; Holmes announces that if, he had brought the Kelmot case to a successful conclusion, he wouldn’t have left Baker Street (noting that he and Watson parted on frosty terms).

Some of the elements feel a little clumsy, signposting the passing eras (Holmes visiting Hiroshima). Although, in fairness, tying this into a quest for a retreat of his encroaching mental decline is reasonably sketched (the prized prickly ash). There isn’t really a puzzle to solve as such, however, and this isn’t ultimately quite as satisfying as the best Holmes fan fictions that take in his personal life (The Private Life of Sherlock Holmes, The Seven Per Cent Solution).

So too, Holmes deductive faculties lack any real dazzle; I feared the worst when precocious child Roger (Milo Parker, a ringer for a young Thomas Brodie-Sangster), son of housekeeper Mrs Munro (Laura Linney), intrudes on the aging sleuth’s routines. It turns out to be a surprisingly winning cross-generational friendship, though, McKellen modulating the gruff-kind-dotty characterisation expertly, and truly convincingly inhabiting a body entering decrepitude (and, thirty years earlier, one in relative vigour).

The signs of Holmes’ rudeness are in evidence even as he discovers the emotional ruin at his core (“Exceptional children are often the product of unremarkable people” he informs Roger’s mother), and there’s a rather stately, elegant race against time aspect to his desire to get to the heart of, and document, his last case before his faculties burn out completely (this imminent ruin appears to be dropped once the case is brought to a satisfactory conclusion). But the minor present mystery (what is killing the bees?), and its conflagration and pay-off, work much more effectively than the tortured trip down memory lane, simply because there isn’t enough substance apportioned to the lot of Ann Kelmot (Hattie Morahan) and her burdened existence.

We haven’t become invested in her case, merely informed of the full circumstances on a park bench, and – despite some notable distractions such the armonica as a means of contacting the spirit world, and Frances de la Tour’s cameo as Madame Schirmer, with an accent almost as ludicrous as the one she employed in the recent Survivor – so Holmes momentary culpability in her demise lacks resonance. The occasional line invokes Conan Doyle’s own later fascinations (“He doesn’t understand. The dead are no so very far away. They’re just, on the other side of the wall”), but Mr. Holmes is really most effective dealing with the emotional stakes of the here and now.

And on that level, Bill Condon’s film is a resounding success. This is his first reteaming with McKellen since his previously most acclaimed picture, Gods and Monsters, and they share a reflective tone in their aging, isolated protagonists. Condon has a patchy relationship with material, elevating The Twilight Saga (well, relatively) but coming unstuck with The Fifth Estate. He’s clearly not averse to big screen spectacle (His next is Beauty and the Beast for Disney), but this type of smaller, more invested affair feels like a better fit. Mostly, though, it’s just a great showcase for McKellen, who draws on a touch of Gandalf-ian wisdom in his compelling portrait of sorrow and decline.

There’s lovely summery scenery from cinematographer Tobias A Schliessler (this does seem like a beatific spot to retire, an apt conjuring of Conan Doyle fate for Holmes) and a gentle yet insistent score from Carter Burwell setting the picture off nicely. Mr. Holmes isn’t by any means remarkable, but provides an emotionally satisfying rumination on the heart of a man who professed to be all mind.