It can't really be Room if Door's open. 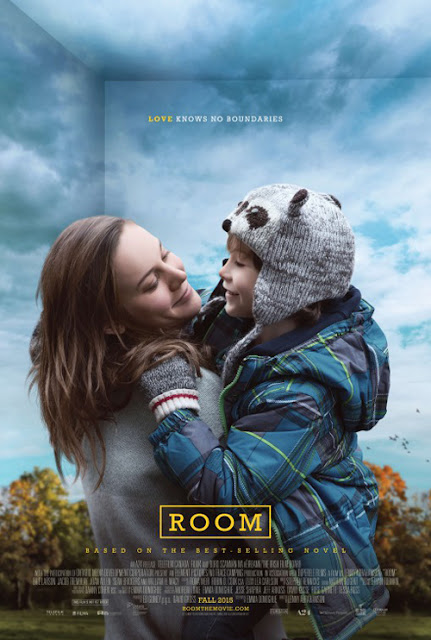 (SPOILERS) Perhaps predictably, the least of the Best Picture Oscar nominees in terms of box office take turns out to be one the best. It would be spurious to get into a debate over the chalk-and-cheese merits of Room versus Mad Max: Fury Road, as both exhibit an exemplary standard of filmmaking craft. Room has been rightly recognised for Brie Larson’s invested, dedicated performance (as affecting, if not more so, than her turn in Short Term 12), but equally laudable are young Jacob Tremblay (how he didn’t earn a supporting actor nomination is beyond me) and director Lenny Abrahamson.

About the only thing Room has in common with Abrahamson’s previous film, Frank, is the difficulty of getting inside the (papier-mâché or otherwise) head of its secondary protagonist. Larson’s Joy, that is (and, respectively, Michael Fassbender’s Frank). She has been abducted and imprisoned in a 10-foot-square, soundproofed garden shed, routinely raped by her captor over a period of seven years, her light and salvation the five-year-old son she would do anything to protect. There’s no articulating her resulting emotional state, and wisely Abrahamson doesn’t try.

An apt scene finds the reunited Joy flaring up at her mother Nancy (Joan Allen), unable and unwilling to relate her feelings and experiences. She believes, possibly rightly, possibly not, that Nancy won’t be able to cope. Later, a touching moment finds Nancy silently processing as Jack (Tremblay) matter-of-factly and devastatingly explains how he would retire to the closet when Old Nick (Sean Bridgers) visited Joy. While Jack, shielded from trauma during his years in Room, is able to adapt to this vast new world, Joy faces a new kind of nightmare, one in which she holds no hope of being understood.

Escape is no release. She finds herself in a different kind of prison, best illustrated by a television interview in which Wendy Crewson’s hostess assassinates her with understanding.  Ruthlessly, but using the same sympathetic tones, she repositions Joy as the guilty party for failing to persuade Old Nick to give Jack up for adoption. In due course, we leave mother and son on a telling note as, revisiting Room at his request, Jack discovers it to be impossibly small and absent of the warmth and comfort it hitherto held; it’s no longer the whole world, or Jack’s Wonderland. While he simply loses all interest, Joy spends her time there just wanting to leave; she may say goodbye to Room with Jack, but she doesn’t have his closure.

Abrahamson’s direction is extraordinarily intimate and empathic. Within Room, he enables us, via Danny Cohen’s cinematography, to experience the meagre surroundings through Jack’s eyes: the entirety of existence in a microcosm (contrastingly, when we see Room from Joy’s perspective it is a place of claustrophobia, entombment and isolation). Yet the progression from there, through Jack’s daring escape into an uncanny environment of un-Room exteriors, unfamiliar faces, hospital floors, grandparents, and pets, is one that elicits fear, bewilderment and then, by incremental turns, adaptation and integration. Notably, the shed housing Room is revealed as a totally unremarkable garden shed in a totally unremarkable neighbourhood (not unlike the exterior of the house in the Elisabeth Fritzl case, the inspiration for Room).

Tremblay’s performance is entirely natural and immediate, while Larson’s is simply heart-breaking. Allen is hugely sympathetic as the mother (the haircut scene is quite wonderful). Tom McCamus (I can only assume the someone on the production was an Orphan Black fan, as they share several cast members, including Amanda Brugel’s hero cop and Joe Pingue’s useless one), slightly dishevelled and boggle-eyed, initially feeds on our, and Joy and Jack’s, uncertainty as Nancy’s boyfriend Leo, yet proves to be the sensitive rock where ex-Robert (William H Macy) cannot even bear to lay eyes upon his grandson.

Stephen Rennick, Abrahamson’s regular composer, provides a low key, evocative piano score, one that reminded me a little of Jon Brion’s work on Eternal Sunshine of the Spotless Mind. I haven’t mentioned Emma Donoghue’s screenplay, adapted from her 2010 novel. She is acutely insightful throughout, avoiding spelling things out or overstatement. Although, if I were to raise a minor niggle, the faux-pint-sized philosophy Jack pronounces as narrator is occasionally a little florid, more suited to gilded affairs such as The Young and Prodigious T.S. Spivet or Extraordinarily Loud and Incredibly Close than Abrahamson’s immersive, heightened-yet-simultaneously-grounded realism. Nevertheless, his film is a powerful, perceptive, wholly immersive experience, one that avoids both sensationalism and tying a bow around its fraught subject matter.

Yes, cake is my weakness.

January 05, 2018
Jumanji: Welcome to the Jungle (2017)
(SPOILERS) Jumanji: Welcome to the Jungle is good fun, and sometimes, that’s enough. It doesn’t break any new ground, and the establishing act is considerably better than the rather rote plotting and character development that follows, but Jake Kasdan’s semi-sequel more than justifies the decision to return to the stomping ground of the tepid 1995 original, a movie sold on its pixels, and is comfortably able to coast on the selling point of hormonal teenagers embodying grown adults.

This is by some distance Kasdan’s biggest movie, and he benefits considerably from Gyula Pados’s cinematography. Kasdan isn’t, I’d suggest, a natural with action set pieces, and the best sequences are clearly prevized ones he’d have little control over (a helicopter chase, most notably). I’m guessing Pados was brought aboard because of his work on Predators and the Maze Runners (although not the lusher first movie), and he lends the picture a suitably verdant veneer. Wh…
Post a Comment
Read more