Do you have a gig tonight, or do you always dress like a hooker from Night Court? 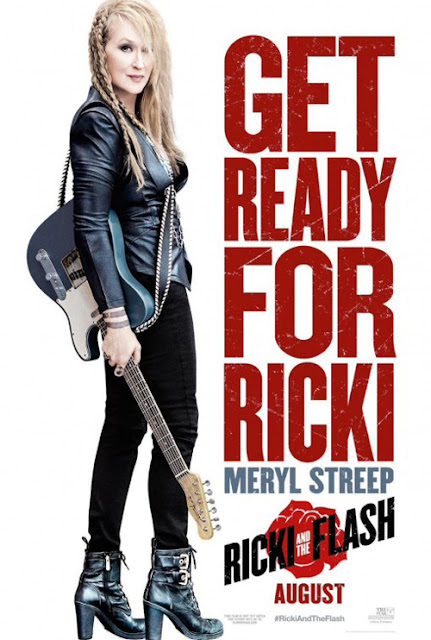 (SPOILERS) Well, Meryl can belt out a tune. And her daughter’s a chip off the old block. And Rick Springfield can emote with the best of them. And Kevin Kline’s the same charmer he always was, but possibly more likeable with a few years on him. Otherwise, though, Ricki and the Flash is an undemanding, trivial trifle, a tepid parody of the attitudinal pictures Jonathan Demme was making in the ‘80s.

So much so, Ricki makes Rachel Getting Married look edgy (and what’s Demme’s current fixation with wedding movies?) One can only conclude the (deserved) success of The Silence of the Lambs deflated the director’s taste in truly offbeat material, as his features since, in one way or another, have evidenced a filmmaker who has lost his way, normalised, forgotten what he’s about, in order to be kind-of engulfed by the Hollywood deep end. That may explain why he’s done so little in the fiction arena in the last decade, concentrating mainly on documentary work.

Ricki and the Flash finds Streep and Kline reuniting for the first time since the wretched Sophie’s Choice (remember the ‘80s, the decade where Meryl seemed to have a permanently drippy nose and eccentrically pronounced accent?), although they were later scheduled to co-star in Death Becomes Her, and their easy chemistry shines through. But Ricki’s an unlikely character, an aging rock chick living an alternative lifestyle on the back of working a supermarket checkout, prone to voicing ultra-conservative sentiments on race, gender and the merits of the Bush family, with a rich ex (and ex-family) from whom she’s entirely estranged. If it weren’t for Streep’s grounding presence, we wouldn’t be buying this for a second. And even then…

As such, both Diablo Cody’s Juno and Young Adult, this forming a “three ages of woman” trilogy of sorts, come from a more coherent and well-conceived place. The attempted suicide of Ricki’s daughter finds Kline’s Pete inviting his former wife down for a spot of crisis counselling, as unlikely as that seems. The interaction between Streep, Kline and Mamie Gummer (Julie) is the highlight of the picture, even as it traverses such essential tropes as getting stoned, having a makeover, and encountering Julie’s duplicitous husband. And Pete’s current wife (Audra McDonald), with whom there is, of course, friction. And the gay son and the other one who is getting married (Nick Westrate and Sebastian Stan, neither of whom make much impression).

Somehow, despite herself, Ricki ends up invited to the wedding, where she proceeds to impose herself on the assembly with an impromptu Bruce Springfield number, and isn’t rewarded with eternal opprobrium. Demme and Cody have configured a bizarre wish-fulfilment ending, one where everything appears to turn out well, a shameless embrace of acceptance and inclusivity, despite having absolutely no reason for the story to go that way (even Julie no longer seems about to top herself). It must be the power of The Boss. This is one of those pictures where you stick with it due to the talent involved, but have absolutely no idea what enticed them in the first place.