Go ahead. What else do you see for me, doctor? 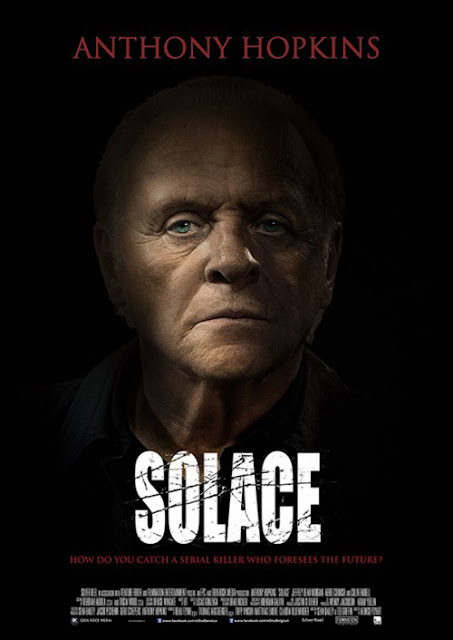 (SPOILERS) Afonso Poyart’s US-language debut was essentially dumped stillborn, having languished in the Warner Bros vault for two years, and it isn’t difficult to see why. A serial killer movie of the most generic order, Solace would have seemed antique two decades ago. It does at least carry a reasonable variation in terms of the motivation of its antagonist, but even that was explored better, and more briefly, in The X-Files episode Leonard Betts (also about two decades ago).

The motivation being that Charles Ambrose (Colin Farrell, phoning it in with great alacrity) is a mercy killer, finishing off those in terminal decline in order to preclude a whole lot of suffering on their parts. He’s also psychic, as psychic as John Clancy (Anthony Hopkins, who at least keeps you watching, but I have no idea why he signed on) and then some (“He’s just like me, he sees things. Only he’s better at it. A whole lot better” realises John, being psychic). Since John merely has to touch someone to see fountains of blood issuing from their person and gain insight into their entire life history, that means Ambrose is pretty damn good.

John has been called in to help Agents Merriweather (Jeffrey Dean Morgan, confirming, Watchmen notwithstanding, why he’s no big screen star; he just disappears in the role) and Cowles (Abbie Cornish, kind of ridiculous, truth be told, although only relatively to the film as a whole) to clue them into Ambrose’s activities. But John is reluctant, haunted by demons, and then by Ambrose too.

Poyart offers a few solid fake-out moments, as a sequence is revealed to have been merely the on-the-spot vision of what might be, but the moral debate is tepid (“I’ve no interest in playing God. As far as his work is concerned, I’m not impressed”) and the reveal of John’s dark secret not really so affecting.

Apparently Solace was originally pegged for a rewrite, so as to sequelise Seven. This was understandably nixed by David Fincher (Morgan Freeman’s William Somerset would have been granted Tony’s psychic powers). In a way it’s heartening to see pictures like this still getting made, unselfconsciously raking over the ashes of a long dormant genre, but one wonders if, even if a really good one came along, it could find an audience. It feels like there’s nowhere left to go with the serial killer thriller right now.