His majesty is thirsty. 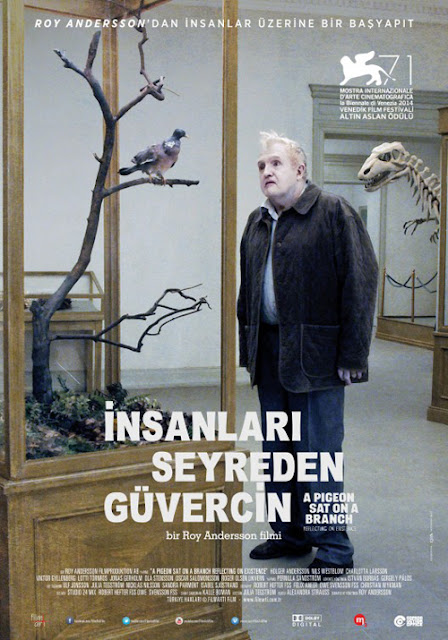 A Pigeon Sat on A Branch, Reflecting on Existence
(2014)

I haven’t seen the previous instalments of Roy Andersson’s “Living” trilogy (“a trilogy about being a human being”), and on the evidence of A Pigeon Sat on a Branch, Reflecting on Existence, I won’t be in any hurry. This Swedish black comedy appears to have been nigh-on universally acclaimed, including winning The Golden Lion at the Venice Film Festival, which rather suggests I’m an ingrate for failing to appreciate it. I was frequently put in mind of the sort of thing Monty Python used to parody, high-brow European art house fare pregnant with devastating insights into the human condition. It entirely failed to persuade me. 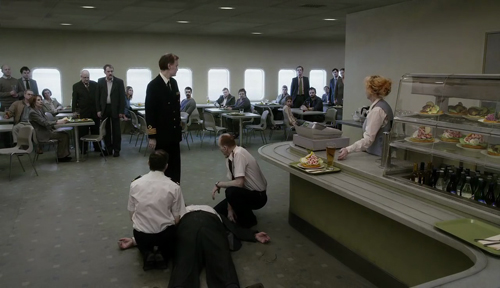 But Pigeon (admittedly a great title) is clearly intended to tickle too, in its ponderous, fusty, precisely-mannered way, proceeding through a series of studied vignettes from “Three meetings with death” (juxtaposing mortality with mundanity; sons attempt to steal their mother’s handbag filled with valuables as “You don’t get to take this to heaven, mother”), to a rotund dance instructor molesting her male student, to the regularly re-joined duo of vampire teeth salesman having trouble collecting their bills, who are inevitably also on the receiving ends of demands themselves. 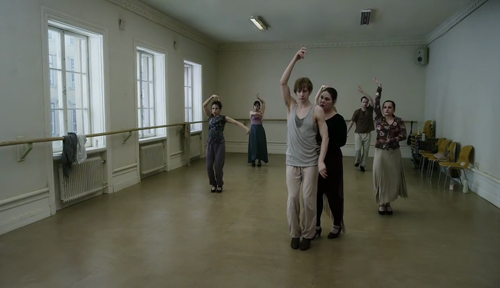 Charles XII enters a café, horsemen in tow, making advances on the young bartender through his equerry, and it plays like a surreal Season One The Young Ones sketch, only without the laughs (it must be that dry Swedish wit). There’s a visually audacious sequence in which slaves are sent into a huge boiler which then rotates under pressure, apparently a commentary on the country’s complicity in colonialism, but… Ah, I just couldn’t summon the will to care whether that’s what it was trying to express. Everyone wears a deathly grey pallor (something to do with the picture’s existential import, reflecting on miserable lives overburdened by commerce and the malaise that is the modern world, no doubt), paralleling Andersson’s rigorous disinterest in engaging. 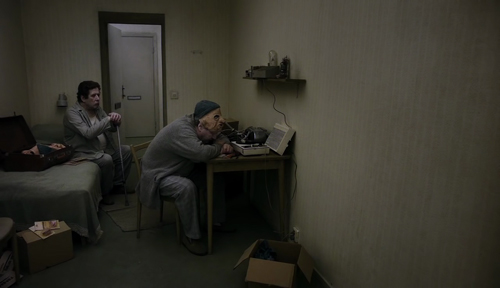 He’s known for “characteristic absurdist deadpan and surrealism”, which I can see, but it left me stone cold (Steve Austin). Great visual compositions, granted, but A Pigeon Sitting on a Branch, Reflecting on Existence isn’t nearly as philosophically poignant, or cerebrally funny, as Andersson believes. That he’s been referred to as a slapstick version of Ingmar Bergman sounds about right, as I’ve frequently found his musings a chore too (I know, I know the philistine in me is out in force in this review). This is the kind of material I used to scoff at when I was a film student, so it’s comforting to acknowledge I haven’t matured very much in the intervening two decades.

You keep a horse in the basement?

August 11, 2015
The ‘Burbs (1989) (SPOILERS) The ‘Burbs is Joe Dante’s masterpiece. Or at least, his masterpiece that isn’t his bite-the-hand-that-feeds-you masterpiece Gremlins 2: The New Batch , or his high profile masterpiece Gremlins . Unlike those two, the latter of which bolted out of the gate and took audiences by surprise with it’s black wit subverting the expected Spielberg melange, and the first which was roundly shunned by viewers and critics for being absolutely nothing like the first and waving that fact gleefully under their noses, The ‘Burbs took a while to gain its foothold in the Dante pantheon.  It came out at a time when there had been a good few movies (not least Dante’s) taking a poke at small town Americana, and it was a Tom Hanks movie when Hanks was still a broad strokes comedy guy ( Big had just made him big, Turner and Hooch was a few months away; you know you’ve really made it when you co-star with a pooch). It’s true to say that some, as with say The Bi
Read more