I'm the only one ever cared about you. And all of that ended an hour ago when you killed my son. 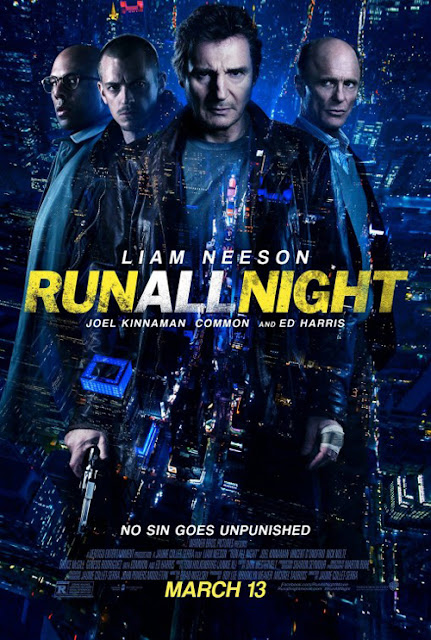 (SPOILERS) I quite like that we’re being “treated” to this never-ending run of Liam Neeson thrillers, some of which aren’t called Taken. None of them have actually been really good, but for a spell several have fooled you into thinking they might be. A common factor in the better ones is Spanish director Jaume Collet-Serra, a director stylish enough, but not nearly auteurish enough, to make the unofficial trilogy he’s completed with Neeson feel nothing at all like an unofficial trilogy.

Run All Night is the best of the three, and like the others it kicks off with enough gumption – for a good hour – to suggest this will be a non-stop, edge-of-the-seat ride into the unknown. Or night, at any rate, as Neeson’s ex mob enforcer Jimy Conlon finds himself on the wrong side of his friend and boss Shawn Maguire (Ed Harris) and has precious hours to make things right. But then, the movie just sort of loses steam, never really quite fizzling out but making you wish you hadn’t got vaguely excited for its potential.

Part of the initial appeal is the calibre of the cast. Neeson, increasingly adopting the star posture of an elder, more hirsute Jason Statham but with less sense of humour, has no option but to raise his game opposite the likes of Harris and Joel Kinnaman as estranged son Mike. And the actual premise is diverting, as Jimmy, formerly Jimmy the Gravedigger, now a drunk haunted by his many acts of murder, shoots Maguire’s unhinged son Danny (Boyd Holbrook, who also appeared with Neeson in the also half-decent A Walk Among the Tombstones) dead before he can kill Mike, who has witnessed Danny’s anti-social antics. Shawn, only hours before comforting Jimmy and promising “Wherever we’re going, when we cross that line, we’re going together”, doesn’t even like his son, but as a father he loves him and so promises furious vengeance; he’ll kill Mike and make Jimmy view the evidence, and then he’ll kill Jimmy.

So it’s up to Jimmy to make sure Mike survives the night, with some dyspeptic bonding en route, plus altercations with cops on the payroll, encounters with ones who aren’t (Vincent D’Onofrio in a stock role, but still solid), and small but memorable roles for Bruce McGill, Nick Nolte and Holt McCallanay. There’s a gripping car chase, a cat-and-mouse on a subway platform, a bruising fight in a men’s room, and several conversations and meets between Jimmy and Shawn. But then Shawn calls in hitman Common, who instantly susses that Jimmy has a cabin retreat (because people in thrillers always have cabin retreats, all the better for a showdown) but singularly fails to finish him and his son off when he gets the chance.

The momentum is lost from this point, and Jimmy even has time to visit his ailing ma in hospital before heading for a shootout with Shawn, whereupon he dispatches his friend with surprising swiftness. That’s a pleasant surprise in a way (not so much that it leads to an entirely predictable aftermath with Common at said cabin), but more a disappointment as one was hoping for something meaty; why cast Harris if you aren’t going to make the most of him? Brad Inglesby also co-wrote the ultimately disappointing Out of the Furnace (although the fault there, giving him the benefit of the doubt, may be Scott Cooper, who ensured Black Mass was less than the sum of its parts), and there’s a feeling this could have gone a number of ways, but ends up just slickly forgettable, withdrawing from any tendency to weightiness the premise offers.

Collet-Serra has little inclination for such contemplation, of course. He’s all about the veneer, but he’s good with veneer. His scenic transitions are a step too far, however, as he lifts off from one point in the city and arrives at the next in a single extended shot. It’s attention-grabbing, but not nearly as arresting as it sounds, and also at odds with what is, in essence, a down-and-dirty family drama. He’s complemented in his mission by a strong, tense, driving score from Junkie XL, which only pauses for the obligatory inclusion of The Pogues (it’s set at Christmas and features Irish-Americans, but one wonders how much the latter was due to Neeson’s involvement and how much the former sprang from a desire to include the band’s most famous song).

Neeson’s making it a Collet-Serra quadrilogy next, with The Commuter lining up for release (that’s Neeson, commutin’ and shootin’). I have no problem watching another of their collaborations; they’re far more fun than the Takens and, Collet-Serra’s a veritable Scorsese compared to the likes of Olivier Megaton, but there’s a nagging sense these two might actually makes something great together one day, if they made a pact to keep their peepers peeled for a really strong script.