Speak a little truth and people lose their minds. 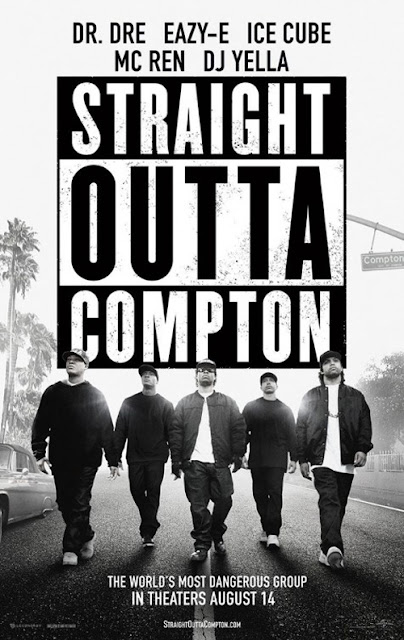 Don’t believe the hype. For Straight Outta Compton to be as good as its acclaim from some quarters suggests, it would have to be some kind of fundamental reinvention of the biopic, that most moribund of genres. Instead, it’s a fairly standard-issue telling of NWA’s rise and disintegration, made with journeyman lack of flair by F Gary Gray. It lucks-in with a series of standout performances, however, so much so that the veteran of the cast, Paul Giamatti, looks vaguely like the one who’s going through the motions.

And for getting on for 90 minutes (I saw the director’s cut), Straight Outta Compton is at least in the top tier of scaling-the-ladder-of-fame stories, carried along by natural narrative energy; not unlike a sports biopic (I’m no great sports fan and I’m not great rap fan, Tone Loc aside), you don’t have to relate to the subject matter if the storytelling is there.

Gray isn’t the kind of director who can work marvels with material, but he can service it effectively enough. Which is why, when it comes to the second half of the picture, as the main players go their separate ways and the focus divides and falters (rather than, when they were together, offering complementary ensemble), he’s unable to bolster the proceedings. One wonders at the decision to procure him for Fast 8, since a heightened quality is just what that series demands; Vin Diesel’s executive decision to go for realism may not reap the dividends he hoped.

As always with a biopic, you can’t get too shirty over what it plays fast and loose with; that’s what documentaries are for (and even then…) When the subject matter is recent and the (most of) the subjects are living, and one of them produced the thing, it becomes even more likely that the treatment will skirt controversial depictions of its heroes. So the group are rambunctious rather than actively misogynistic (or homophobic), with Dr Dre only ever inflicting violence on men. Indeed, he comes across instead as the man with his mind on higher, artier things, which given his creative legacy is perhaps understandable.

Corey Hawkins’ sensitive performance is perfectly pitched in that regard, comparing and contrasting to Shea Jackson Jr (a remarkable study of his father; or, he’s simply very much a chip off the old block) as Ice Cube and Jason Mitchell as the ill-fated Eazy-E. Everyone else, Giamatti’s nefarious manager aside, is more or less window dressing and background texture. Which again, makes sense. The bane of biopics can be how painfully linear they feel, and with three main characters, Straight Outta Compton at least avoids coming across quite so overtly so.

The screenplay (credited to four different writers, all of them white, as per this year’s Oscar diversity controversy highlighting its lack of recognition outside the Best Original Screenplay category; although, I’d argue such standard biopic fare as this was lucky to receive even that nod) gets the “positive” legacy controversy down, particularly in respect of Fuck Tha Police and being on the receiving end of police harassment and violence, as they spearhead the explosion of “this whole reality rap shit” that the most of the music industry was keen to dismiss. Bring in the FBI, attempting to hoover up their lyrical pronouncements with threats (“Maybe we should be happy. This is free publicity for NWA”) and the manipulations of manager Jerry Heller (Giamatti), and you have a potent brew, making for engrossing cinema.

But, following Ice Cube’s split, and then Dre’s alliance with Suge Knight (R Marcos Taylor), the picture has problems maintaining its verve. The in-fighting (Cube responds to NWA’s sleights lyrically) never feels truly combustible, and when Suge beats a man over a parking place, to Dre’s aghast response, it’s positioned as coming out of nowhere rather than something that must have been brewing all along.

It’s fun to see cameos from soon-to-be rap legends (Snoop Dogg, Tupac), and the picture does sign off at a (rather perfunctory) point where it would be interesting to witness the furtherance of their careers (well, Cube’s spiral into a very variable roster of acting roles, not so much, although xXx: State of the Union would no doubt be a high point), but it becomes clear post the fact it has been listing alarmingly, its through-line (the death of Easy E, the potential reformation of NWA) simply insufficient emotionally or narratively to support it. As biopics go, Straight Outta Compton is above average, but it’s still very much a biopic, with all the dilution, preformatting and playing it safe that entails.