The Englishman will die. 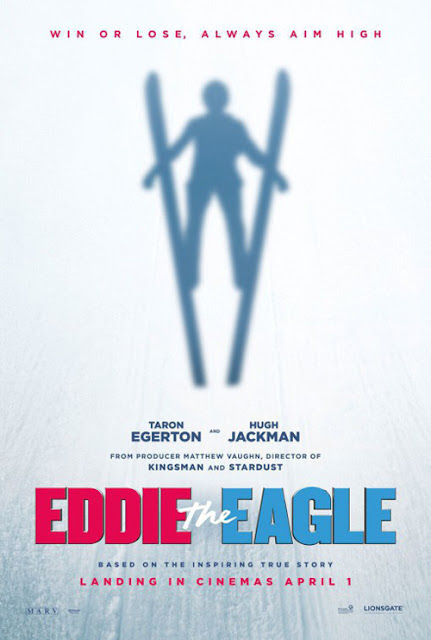 Eddie the Eagle could easily have been as embarrassing as his presence was to the British Olympic team, had it been allowed to turn into a Norman Wisdom-esque, maximum gurning, comedy prat stick-tacular. Eddie would probably even have got the girl at the end. Which isn’t to say the movie has much in the way of fidelity to the facts (the real Michael Edwards said it was about 5% accurate), or that it doesn’t wallow in superficially conjured, cloying life-affirmation, but Dexter Fletcher’s third big screen directorial jaunt mostly surmounts the snares that come with the territory, thanks to a supremely winning and dedicated performance from Taron Egerton, one that makes you care about a real-life caricature.

The physical transformation is impressive enough; Egerton, the latest handsome young British export everyone wants for their next project, becomes a bit of a sight, all protruding jaw, ungainly physique and frightful whiskers. More than that, though, he fills in and adds substance to the broad strokes that are Simon Kelton and Sean Macaulay’s screenplay; I can only imagine how enfeebled this would have been with the rumoured Rupert Grint in the lead. Like a proper Rocky story, but by way of a very British loser, the writers give Eddie an even bigger mountain to climb than the real Eddie, in their “based on a true story”, and have him hampered at every turn by unsympathetic officials (personified by a magnificently snobby, elitist Tim McInnerny), advancing by dint of sheer doggedness and good-natured gumption.

It’s a classic aspirational, against-the-odds tale, seen in the same week as Zootropolis/ Zootopia/ Zoomania. Otherwise disparate in style and content, both find their protagonists’ parents and authority figures attempting to divert their heroes from the path to fulfilment (the makers tactfully leave out that Eddie failed to qualify for the ‘94 and ’98 Olympics because the spoil-sport committee raised qualification standards). Of course, Judy Hopps is actually really good at what she does, while Eddie gets points simply for showing up.

And being a character. We love a character, and so did the crowds and media at the ’88 Winter Olympics. The part about disgruntled team mates objecting to his stealing their thunder is dead-on, but Eddie the Eagle successfully pulls the trick of making Eddie both a clumsy, hapless, hopeless joke and a figure emblematic of purity of motive and intent. If that’s sentimental, well, it works.

Hugh Jackman’s (fictional; Eddie was actually trained by a couple of Americans) inebriated trainer is an unreconstituted cliché, and his plotline of redemption by way of a Chris Walken cameo is rather superfluous. Yet he has chemistry with Egerton, and the picture very much needed his type of mentor/ sounding board. Keith Allen and Jo Hartley are likewise integral as Eddie’s parents, inhabiting traditionally furnished roles of dissuasive dad and supporting mum. Fletcher, who sneaks in a cameo for his old Press Gang cohort Paul Reynolds… as a reporter… is sensible enough to let keep the performances front-and-centre, but knows exactly how to portray the vertiginous thrill of the jump, and only really shows off once, with a CGI-assisted Jackman 90-foot plunge.

Matthew Margeson (this being a Matthew Vaughn production, he previously co-wrote the Kingsman score) provides a jolly, upbeat ‘80s-styled synth soundtrack, exactly what you’d expect of Chariots of Fire if it accompanied a plasterer by trade. Which rather underlines that you’d be impossibly grouchy not to be pulled along by the picture, even as you recognise its posing represents an all-too familiar shorthand (and thus guaranteed export market) for the British film industry. Egerton is magnificent though, and is largely responsible for making Eddie the Eagle soar. A bit of a shame he’s soon going to be wasting his time on Robin Hood: Origins nonsense, then.