Well, it's not like it was an ancient tribal burial ground. 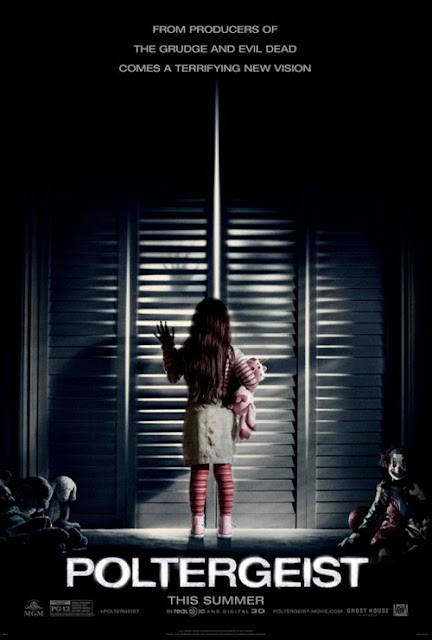 MGM’s ransacking of their archives for properties to remake to negligible response, other than sullying their reputation through wanton disrespect, might not seem that heinous in respect of Poltergeist. It was, after all, the spooky equivalent of Jaws. A Spielberg concept “directed by Tobe Hooper”, run into the ground through neglect and the desire for artistically bankrupt sequels. But Gil Kenan’s update is so wilfully redundant, particularly when the original had something special going for it, it might be worth keeping the 2015 take in mind as a harbinger of what will become of many an ‘80s classic (well, there are only so many ‘80s classics to start with, but you get the idea) when their master architects are no longer around to put the kibosh on suits’ plans to jump-start a brand.

MGM’s plundering hasn’t produced anything anyone’s sat up and taken notice of, and none of them have felt like a prestige or event picture, from Carrie to Robocop to Fame to Red Dawn. And with a ho-hum speed-ramped Ben-Hur and a Fuqua’d The Magnificent Seven to come this year, and Road House and another Thomas Crown Affair in the pipeline, that doesn’t look like it’s going to change very soon. There was some vague hope for Poltergeist. After all, Sam Raimi was attached as producer, who had garnered respect for shepherding various horror properties to the screen (mostly remakes of Japanese fare). And Kenan seemed to have the right sensibility. Monster House was well-regarded, and his live-action debut, City of Ember was under-seen but suggested he wouldn’t have to return to expressing himself purely via pixels any time soon.

Poltergeist, though, as suggested by the limp attempts to update it for a generation 30-years on, brings little new to the table, particularly arriving as it does in the shade of James Wan’s more effective series of family-shockers. Maybe that’s down to David Lindsay-Abaire’s antiseptic screenplay (he also contributed to the less than impressive adaptations of Rise of the Guardians and Oz The Great and Powerful; the latter suggests he impressed Raimi, but I can’t think why, given the end result), or maybe it’s just a general lack of confidence given the original’s insurmountable iconography.

The closest we come is in the depiction of the parents, whose own domestic disturbance is far more engaging than the frightful occurrences (he’s out of work, demanding she stay at home to complete that novel, although really it’s about his insecure breadwinner status). Indeed, when Sam Rockwell and Rosemarie DeWitt (another reason to have looked to the picture’s potential, as they’re excellent choices) are on screen, before they’re bowdlerised by the incessant un-special effects of the last half hour, you might almost believe Poltergeist is heading some place interesting. Rockwell’s never one to play a normal guy, but that makes his efforts to be an understanding dad and gracious husband more marked, leading to a memorable sequence of gross immaturity as he embarks on a spending spree with his one non-maxed-out credit card. DeWitt has less to do, but she tends to make you forget when she’s doing it.

The kids aren’t as successful, though. Kyle Catlett, the lead in The Young and Prodigious T.S. Spivet, comes across like he’s just stepped out of a new Kenan CGI animation, and where his oddball quality worked in Spivet, here it just tends to mark the movie out as cartoonish and ungrounded even before anything strange has happened. Saxon Sharbino is just another teenage daughter, and Kennedi Clements, essaying the “They’re here!” role, is insufficiently supported by gradually escalating strangeness so her plight lacks any impact.

Which is the biggest problem. The picture unfolds in such a functional, mechanical manner in respect of the supernatural element, it neither surprises nor scares anybody. Tree scene? Check. TV set (big TV set)? Check. Gateway to another realm, but now with copious, bland CGI? Check. Jared Harris offers some relief as smooth showman ghostbuster Carrigan Burke, full of war stories and bearing the demeanour of a faker, and Jane Adams offers contrasting gravitas as the earnest faculty professor on hand, but by this point the picture can only play out its store in undemanding, unconvincing fashion.

When we arrive at the house kidnapping the family car, for yet more CGI-assisted attempts at a top-that finale, there’s still ten minutes to go, and it’s a snooze. One might hope this would impede the studio’s will to remake its back catalogue, since none of them thus far have really been worth the effort, but if there’s any chance of just one landing, you know they’ll take it.

May 24, 2013
Django Unchained (2012)
(MINOR SPOILERS) Since the painful misstep of Grindhouse/Death Proof, Quentin Tarantino has regained the higher ground like never before. Pulp Fiction, his previous commercial and critical peak, has been at very least equalled by the back-to-back hits of Inglourious Basterds and Django Unchained. Having been underwhelmed by his post Pulp Fiction efforts (albeit, I admired his technical advances as a director in Kill Bill), I was pleasantly surprised by Inglourious Basterds. It was no work of genius (so not Pulp Fiction) by any means, but there was a gleeful irreverence in its treatment of history and even to the nominal heroic status of its titular protagonists. Tonally, it was a good fit for the director’s “cool” aesthetic. As a purveyor of postmodern pastiche, where the surface level is the subtext, in some ways he was operating at his zenith. Django Unchained is a retreat from that position, the director caught in the tug between his all-important aesthetic pr…
1 comment
Read more

Bad luck to kill a seabird.

February 14, 2020
The Lighthouse (2019)
(SPOILERS) Robert Eggers’ acclaimed – and Oscar-nominated – second feature is, in some respects, a similar beast to his previous The Witch, whereby isolated individuals of bygone eras are subjected to the unsparing attentions of nature. In his scheme of things, nature becomes an active, embodied force, one that has no respect for the line between imaginings and reality and which proceeds to test its targets’ sanity by means of both elements and elementals. All helped along by unhealthy doses of superstition. But where The Witch sustained itself, and the gradual unravelling of the family unit led to a germane climax, The Lighthouse becomes, well, rather silly.

Performance-wise, Will Poulter is a stand-out as a tremendously obnoxious little toff, so charismatic you're almost rooting for him. Simon Pegg replaces Eddie Izzard as the voice of Reepicheep and delivers a touching performance.
***
Post a Comment
Read more