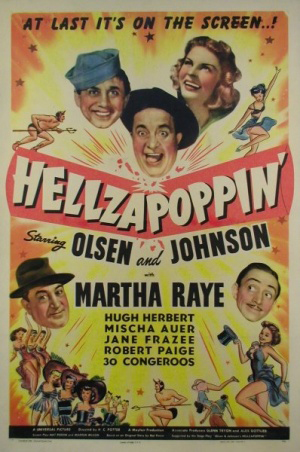 The film that tends to get credited as the progenitor of unfettered fourth wall breaking. Not that comedies weren’t doing this kind of thing from the get-go, but not quite as concertedly or consistently or inventively as Hellzapoppin’. Universal had scooped up the rights to the musical revue (and Hellzapoppin’ is nothing if not inhabited with the feel of a revue) by comedians Harold “Chic” Johnson and John “Ole” Olsen, who star in and compere the proceedings, betting it would translate somehow. Somehow it does, albeit by way of a very hit-and-miss movie, one in which you can’t help but admire the sheer abandon involved. 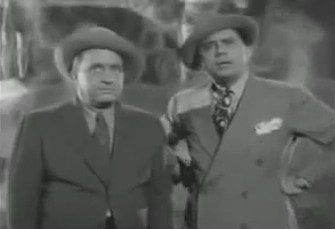 The show, first staged in 1938, was the longest running Broadway musical at the time, a melee of skits, one-liners, slapstick and songs, relying on audience interaction and encouraging a general disregard for the self-contained stage. This element naturally lent itself to the screen version, so stressing its irreverence immediately (“… any similarity between Hellzapoppin’ and a real motion picture is purely coincidental”). The form, the slightest of plots providing a means to glue together asides and gags, with songs as filler, along with a love story “because every picture has one”, recalls the outings of former stage performers the Marx Brothers, but this takes the approach even further. 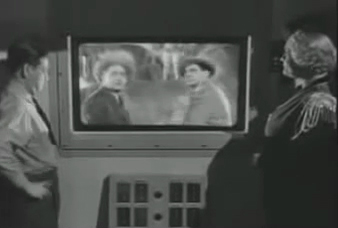 If Ole and Chic aren’t disrupting what flow there is, then it’s Shemp Howard’s projectionist Louie (“What’s the matter with you guys? Don’t you know you can’t talk to me and the audience”), reversing the film or pulling frames up, down or upside down, and following pretty girls around the room. Or Hugh Herbert (Quimby) appearing at intervals, uttering some piece of drollery or exhibiting a costume change. Ole and Chic lose heads and bodies, travel from set to set and generally deconstruct what little construction there is (“Look my friend, we’re making a motion picture here”; “That’s a matter of opinion”) and point the finger at Tinseltown’s habit of meddling for the sake of it (“This is Hollywood, we change everything”). 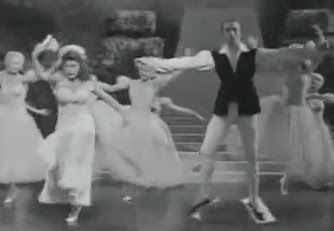 Fortunately, the extended romantic entanglements aren’t soporific the way they are in Marx Brothers movies; Pepi (Mischa Auer, with a natural gait and face for comedy) pursues Kitty Rand (Jane Frazee), and is himself pursued by Betty Johnson (Martha Raye), leading to a series of spirited, risqué lines and energetic dance numbers (particularly Raye on a treadmill, and Auer leaping about with paper stuck to his feet; there’s also some awesome Congeroo jitterbugging). 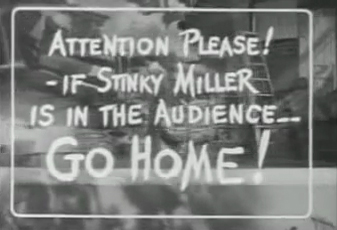 The trade and techniques will be readily recognisable to anyone familiar with the Zucker Brothers, Mel Brooks, Hope and Crosby, or Spike Milligan. The picture is replete with announcements to the audience (“Stinky, will you go home?”) and topical references (Frankenstein’s Monster, Mr Jordan). There is a cumulative feeling that this is just stretching itself for as long as it can keep going, at which point its inventiveness begins to feel like formula, but Hellzapoppin’, whose director HC Potter came from theatre, and later helmed Mr Blandings Builds His Dream House, is still a lesson in what are often assumed as relatively modern comedy techniques being nothing of the sort. 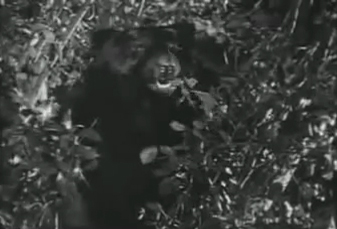 The movie concludes – not really spoilers – with a hunter attempting to shoot a bear (well, a man in a bear costume), who comments “Ha ha ha. You missed me. You need glasses” to which some (real) dogs observe “Imagine that, a talking bear”. At which point the scriptwriter is reprimanded, “Talking bears, talking Dogs, people who disappear, slapstick comedy. What kind of script is that?” It’s Hellzapoppin’ evidently, and its influence is vast. That doesn’t make it an unassailable classic, of course. What it really lacks is a strong talent to martial the mayhem; Ole and Chic are merely amiable rather than exuberant or provocative, which may explain why they didn’t achieve a lasting foothold in Hollywood. 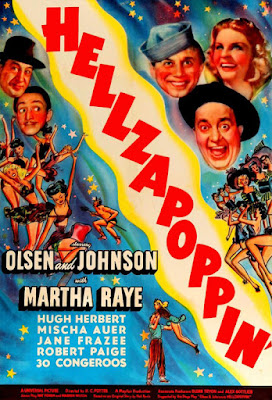