Alienation is good for your art. 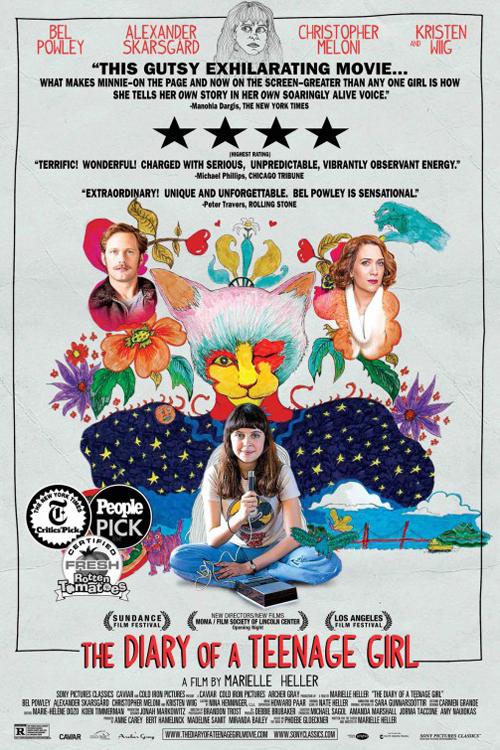 (SPOILERS) Not so much flirting with controversial material as belly flopping into it, actress Marielle Heller’s writer-directorial debut adapts Phoebe Gloeckner’s 2002 graphic novel The Diary of a Teenage Girl: An Account in Words and Pictures with winning flair for the visual flourishes of its source material, its protagonist given to flights of fantasy and doodlings come alive. It comes as little surprise then, that Robert Crumb was an inspiration to Gloeckner; there’s a similarly libidinous grotesquery in protagonist Minnie’s style and obsessions. At times, one can’t help but recall Terry Zwigoff’s doc Crumb and the animated parts of American Splendor.

Set in San Francisco, 1976, Diary follows 15-year-old Minnie (English actress Bel Powley) on a journey of sexual discovery, as she is deflowered by her mother’s boyfriend Monroe (Alexander  Skarsgård) and proceeds to grow in confidence and abandon, despite being a bit of a geek at heart. Heller’s depicts a San Francisco of generally debauched licentiousness, a fecund setting for such rites of passage, and with a mother (Kristen Wiig) permanently out of it on something, and a stepfather-come-shrink (Christopher Meloni) mostly out of the picture, Minnie is pretty much unimpeded in her experimentation, for better or worse.

Teen angst bullshit can be a bit of chore to sit through, but when it’s infused with such wry observation, visual verve and idiosyncrasy as it is here, it’s frequently a delight (Diary isn’t a comedy, though, however much the larger-than-life elements and poster design may give that impression). Powley (in her 20s, lest anyone be concerned, which given Hollywood’s track record would be entirely reasonable) is marvellously dour as the febrile, heavy-lidded teen with a head full of noise, lust and longing, while Skarsgård is entirely unapologetic as the lustful lust object.

His morally culpable exploiter of teen flesh, surfing the frisson of a free-love licence in the period of Polanski’s proclivities, is perhaps the picture’s biggest risk, since Heller is uninterested in assigning standard-issue judgement calls, confident the audience can make their own minds up. Wiig is strong, but proffered something of a short straw in an underseen and used role (albeit at least partly required by the plot), while Abby Wait scores big with every line reading as a younger sister who manages to make Minnie look the height of cool.

It isn’t all note-perfect; an acid trip scene is unable to offer more than the heights of cliché, as Monroe has a bad one, and sometimes the succession of encounters feels like Minnie, or Heller, or Gloeckner, is ticking off a checklist. So too, the ending is disappointingly staid, embracing the learn-and-grow nature of the teen genre.

But mostly The Diary of a Teenage Girl is a fresh, vibrant movie, one that deserves to sit alongside the most astute charterings of the treacherous waters of teendom. Whatever Heller does next, and Powley for that matter, ought to be well worth a look. The UK 18 certificate seems as absurd as it did for Heathers back in the day, since it excludes the age group who would respond to it most (well, not really – when did a certificate ever do that? – but nominally so). This may be uncompromising, but it isn’t an especially explicit film, except perhaps in the censor’s fetid imagination; what probably most unnerved them is Diary’s reticence in terms of blame and consequence, thus failing to offer acceptably moralistic resolutions.