I'm not sure we should emphasise the rebel in you, Jimmy. 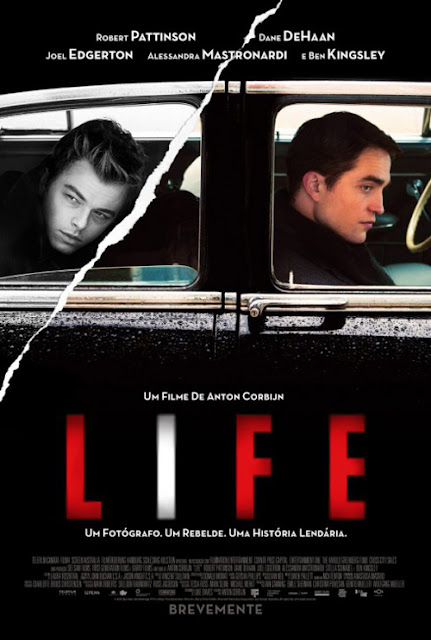 (SPOILERS) Generally speaking, the biopic tends to be on firmer ground when it opts for a sliver of a life, rather than attempting to cram in the full selection of signposts in scrupulously episodic fashion. So it is with Anton Corbijn’s latest, which, being about a photographer’s relationship with a movie star, is right up his street (with no name). Following Dennis Stock (Robert Pattinson) and his attempts to secure a Life magazine photoshoot with next-big-thing James Dean (Dane DeHaan), Corbijn is confidently low key facing the legacy of one of the screen’s most iconic presences, and fashions a picture at least as interesting as his debut, Control.

I’ve only been lukewarm on A Most Wanted Man, the previous of his four features, which didn’t quite come together based on less-than-stellar Le Carré source material. Corbijn had wanted his star of that film, Philip Seymour Hoffman, for the role of Stock’s agency editor John G Morris, but Joel Edgerton’s supremely confident performance, slipping into the mantle of business veteran, is a reminder of just how good he can be when avoiding terrible period epics (Ridley Scott will do that to you).

Pattinson is also very good, to be commended for the latest in a string of roles attempting to banish the spectre of Edward Cullen. Stock’s a self-absorbed, highly-strung, unsympathetic fellow, such a bad dad he manages to puke on his son on that one occasion he spends any time with him. But his desperate awkwardness is nevertheless palpable, seeing something in Dean he has to capture, such that he elicits empathy in spite of himself. As Dean observes “He’s one of those guys who can’t seem to get out of his own way”.

DeHaan’s the real reason to see Life, though. I’ve never been remotely fascinated with Dean and, if I’m quite honest, don’t much care for the trio of pictures he completed before his untimely death. This may even help the viewing experience, though, as I didn’t watch expecting a note-perfect rendition of the actor. And because DeHaan makes Dean interesting; he doesn’t have the same pretty boy looks, so you can’t quite see the swoon-factor Dean exuded (in the same way, Pattinson retreats into his own face and pulls out a kind of pug, thick-lidded grimness), but he captures the voice and, most importantly, the flirtatious, effortlessly manipulative caprice of the star. This is someone who will lead the head of a major studio up the garden path (Ben Kingsley, doing what comes easy and being aggressive), so it’s no wonder he takes advantage of his curmudgeonly hanger-on.

The contrast between the two is at its most effective when Stock, after many attempts to secure Dean’s time (he finally gets the famous Time Square shot) while the latter plays hard to get, heads off to Ohio with him, where the photographer is even more of a fish-out-of-water than on his home turf. Dean is ever-quick to take the rise out of him, and at every turn (almost, he’s hesitant speaking at a school dance) displays an air of effortlessly hip, relaxed confidence that bewilders Stock. “How do you make this so easy?” the snapper asks, after blowing up at him. “What do you think is so easy, exactly?” Dean replies, cryptic to the last, but effectively capturing the gulf in perception between the two of them.

While Corbijn is wholly successful in capturing a vision of the ‘50s that isn’t remotely nostalgic, with freezing cold, bad drugs, crap movies (Dean’s amusement when asked if he likes The Boy from Oklahoma is infectious) and tyrannical Tinseltown chores to fulfil, he’s less sure how to imbue the picture with portents of its star’s imminent demise. We see the side of Dean that fills with uncomprehending emotion over the unknown to come, but it’s a little too neat, as if Corbijn feels compelled to find a send-off point he it isn’t wholly convinced by. When the picture sticks to Dean’s wilfully wayward, poetic nature, contrasted with Stock’s rigid permanence (when Dean cries, Stock can only stonily continue clicking away), it tells us enough right there about one person living every moment of life and another resistant to its embrace.

The reaction to Life seems to have been generally less than enthusiastic, and it’s certainly unlikely to reward anyone expecting an eventful or showy rummage through Dean’s personal life (although we do see his dalliance with Pier Angeli, a rather wonderful Allessandra Mastronardi), but Corbyn’s meditation on the actor’s last days is commendably un-awestruck, even to the extent that those iconic photos aren’t made out to be the result of some kind of magic or alchemy, and rewards perseverance.