They call him "The Weapon". 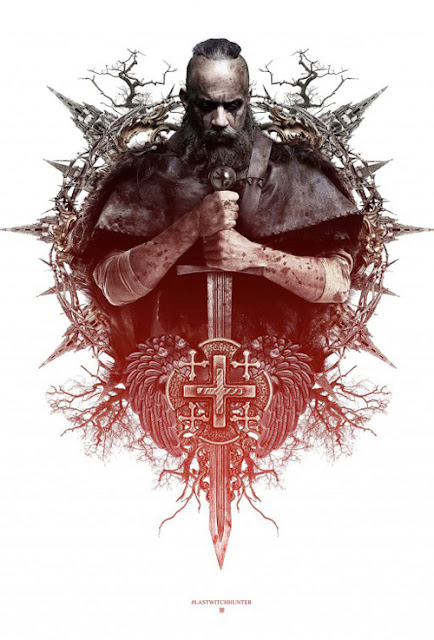 (SPOILERS) Don’t you shake your gory locks at Vin, pestilent witch-hags, and definitely not when he’s sporting some proficiently hirsute wig-age himself. Something of a dream project for Vin (but aren’t they all?), being a big D&D fan (the big, bald, lovably nerdy schlub), and another of his doomed dreams for a franchise starter. No Vin, no one wants to see you non-Dom (well, I’d rather like to see you Riddicking-out again, but any chance of further escapades there seem done and dusted), I suspect not even xXx-ing. In this case, though, mostly because The Last Witch Hunter’s rather boring.

I like a good B-witch movie as much as the next person content to make light of the terrible injustices perpetrated through the Middle Ages and beyond by vilifying the old ways and accusing anyone who took one’s non-fancy of being one, but this isn’t among their number, alas. I’d much rather encore the daft but fun Nic Cage Season of the Witch. That at least was period-centric, and gave Nic a titan of hair tendrils. Here, Vin, wanting to play husky modern man Vin, can’t even be bothered to stay put. Before we know it, having defeated the Witch Queen (Julie Engelbrecht) and been cursed with immortality, like an even less expressive Connor McLeod, follicly flatulent McKaulder is given an extreme makeover, resurfacing with familiar shiny pate and in the old 21st, slaying dread witches (now a race, distinct from humans) for the saintly order of The Axe and Cross.

There’s an assortment of familiar faces lending support, from Michael Caine, well into his 80s but appealingly showing he’s as ready to swoop in for a payday and a payday only, the art be damned, as he was 30 years ago, playing Kaulder’s right-hand man (Vin unconvincingly refers to him as “kid”; they have zero rapport), to Elijah Wood as a slightly creepy priestly replacement (is there any other Wood role, aside from innocent; creepy tells you enough about the character’s ultimate destination, anyway), to Rose Leslie of Game of Thrones, the evidence suggesting she should steer clear of the posh accent (she looks like she’s having a devil of a time chewing on it), as a good witch.

Occasionally, someone shows up and lends a touch of class, such as Isaach De Bankole’s blind dealer witch, but portly bad guy Belial (Olafur Darri Olafsson) isn’t fooling anyone that he’s a match for the Diesel (although his fake beard is equally fake looking, so there’s that).

Vin’s been here with doomed genre forays before, of course, such as the well-meaning but largely banal Babylon A.D. Witch Hunter likewise arrives laden with clichés. It comes as no surprise that the not-especially-interesting Witch Queen, the presumed vanquished foe of the first scene, wishes to stage a rematch, or that she does so in the company of a bucket load of CGI. Meanwhile Vin, despite 800 years to come to terms with his lot, is still doting over lost love, and annoyingly obsessed with taking a vision quest of which no good can come.

The Last Witch Hunter is blessed with a plot so undemanding, it’s difficult to summon any resolve trying to relate it, so I won’t even try. I don’t really blame director Breck Eisner (brought into replace Timur Bekmambetov), since his Crazies remake (already half a decade old) was really quite respectable. And Dean Semler ensures the visuals look forgettably proficient enough. No, mostly it’s the writers who warrant acrimony. I’ll hold off on criticising Cory Goodman, without anything else to compare against, whose Blacklist script got this moving, but the rewrite by Matt Sazama and Burk Sharpless, go-to guys for shite fantasy vehicles (Dracula Untold, Gods of Egypt) is probably the chief culprit. That and the problem of Vin’s enthusiasm for different genres outweighing his adaptability. This is closer to Arnie taking on one of these sorts of roles in his late ‘90s-early ‘00s decline, and rather suggests an actor who mistakenly thinks he has the star power to get by through playing his own self-styled type.