You kids wouldn't last one day out in the Scorch. 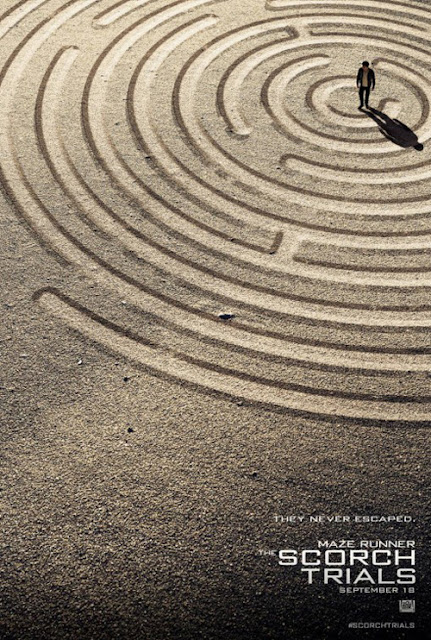 (SPOILERS) No mazes, amazingly, but this is a superior sequel to the original in most respects, relieved as it is of a daffy ending and further showcasing Wes Ball’s confident accession to the status of first-rate action director. He’s so good at engaging with a raft of set pieces – even those replete with wanton, rampant CGI zombies, surely a no-no since I am Legend, shurely – that there’s little time to pause and debate whether Maze Runner: Scorch Trials makes any sense, and observe how the performances are mostly so-so and the dialogue on the crummy side. As such, it’s easily the most entertaining of last year’s YAs.

Which are currently dwindling in confidence and stature, what with the decision to split the last Divergence in two leading to audiences not falling for that again, and Maze Runner 3: The Death Cure delayed until 2018 while lead Dylan O’Brien recovers from his nasty onset accident.

Shorn of the need to dwell on the unlikely (to say the least) reveal of the last movie, that the vital subjects of the experiment, immune to the Flare virus, are essentially cannon fodder, Ball and TS Nowlin (adapting all three of James Dashner’s novels; quite possibly it won’t get to the stage of prequel making, or Fox will opt for a TV spin-off at that point) can instead indulge one long chase.

First the kids are locked up by Aiden Gillen’s Janson, looking as disreputable as he always does, while whistling a vague register of blarney under his breath as he searches out inscrutable vowels by contorting his mouth in various unlikely directions. Not for long, though, as they soon bust out, having discovered a Coma-type facility in a secured wing, full of hanging bodies being used for dastardly plans. The truth, shockingly, is that they weren’t rescued at all; they’re still part of WCKD’s plot!

Escaping into the post-apocalyptic Scorch, the intrepid youngsters encounter a suitably derelict environment, host to a succession of sand and ruined cities. And dark tunnels filled with zombie Crank hoards. This is a piecemeal affair, loosely strung together by sporadic encounters with those who may or may not help our heroes, but Ball ensures it motors along like it has real purpose.

Helping matters are a couple of new additions to the cast in the form of Giancarlo Esposito and Rose Salazar (also of Divergent: Insurgent), the latter particularly making an impression where most of the original cast besides O’Brien are given little to do (Thomas Brodie-Sangster is almost irrelevant). There’s also Barry Pepper, evidently relieved that Battlefield Earth didn’t completely kibosh his prospects for appearing in further science fiction movies. Best of the bunch is Alan Tudyk as a preening night club owner luring young innocents, stoking them full of drugs, and then sending them back to WKD.

Ball does an especially blinding job during an extended sequence in a ruined San Francisco, as Thomas and Brenda first encounter zombies erupting from floors and walls, then peg it up an alarmingly listing building, with the hungry ones in hot pursuit, culminating in a show-stopping homage to The Lost World’s breaking glass window (for another such homage, see The Secret Life of Pets). The demands of a really awkward capture-rescue climax, which opts for the old “driving into the midst of the enemy and turning the tables” chestnut as if it was ever a really satisfying solution, rather confound him, but that’s hardly his fault; he’s doing his damnedest.

As for the reveal of Teresa’s (Kaya Scoledario) complicity, it might have been more tactfully disguised, rather than cutting to her looking furtively guilty or fretful throughout. What can she have done? This is one of those series where no doubt all will be forgiven, or atoned for, despite Brenda being a much better bet for the very in-demand Thomas. Whose rousing speech at the end isn’t all that, but provides sufficient motivation to return to the lion’s den and rescue his captured pals. The question is whether the extended interim between Maze Runner: The Scorch Trials and The Death Cure will whet appetites or prove just that bit too long for those who currently care. It may have worked for Furious 7, but this isn’t that.