God didn’t intend for us to play football. 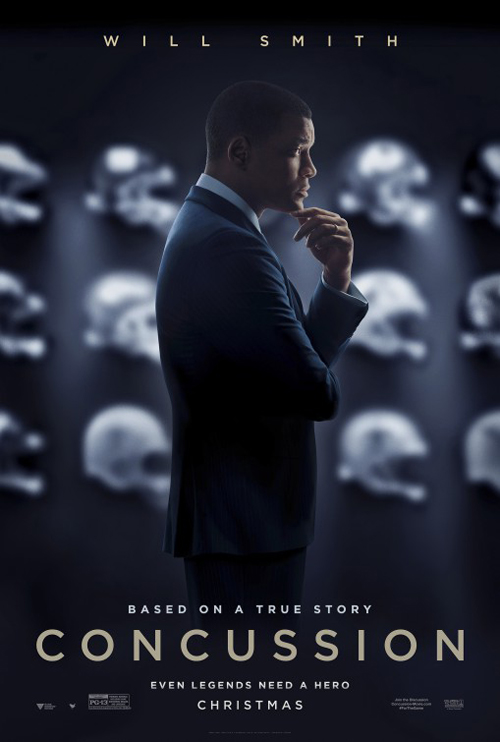 (SPOILERS) I rated Kill the Messenger, scripted by Concussion writer-director Peter Landesman, who seems to be magpie-ing his way through a variety conspiracy-related material, expressing either an anti- (Parkland; one would almost think he was trying to be controversial in suggesting JFK’s assassination was purely, solely and entirely down to Lee Harvey Oswald) or pro- (Messenger, the upcoming Felt, where he goes to the well already partially explored in All the President’s Men, by throwing a light on Deep Throat). Here he covers pathologist Dr Bennet Omalu’s diagnosis of CTE (chronic traumatic encephalopathy) in NFL football players, and he’s aided by sterling work from a fine cast. Unfortunately, as both director and writer he rather lets the side down.

In terms of pluses, Will Smith offers an impressively immersive turn as the Nigerian-born Omalu, not so much because there’s anything particularly astonishing about the emotional journey (and the requisite love story with Gugu Mbatha-Raw is laborious Hollywood gloss, however much it may be based on fact), but because he abandons the usual Smith crutches of showboating charm and irrepressible charisma. It’s also just plain rewarding to see Smith rising to the challenge of peers who up his game, notably Alec Baldwin as the conscience-stricken former physician for the Pennsylvania Steelers and the ever-wonderful Albert Brooks as Omalu’s mentor. There’s a lovely little cameo from Eddie Marsan, and David Morse is strong as the former centre star whose suicide invites Omalu’s suspicions of something seriously awry with a game that habitually inflicts enormous damage on the brains of its players.

Omalu’s a real straight arrow, and a corpse whisperer (infuriating perhaps the most overtly hissable character in the movie, co-worker Mike O’Malley) who puts his money where his mouth is by funding vital tests himself. With his religious convictions, it’s perhaps surprising Concussion wasn’t sold to the faith-based crowd. Although, its negligible box office generally suggests a difficult movie for the real religious faithful, American Football fans themselves. And I’m suspect there’s enough crossover in competing fervours for it to be a problem case generally.

Landesman gets the conspiracy play down pat, aside from an obligatory, pedestrian “thriller” sequence in which pregnant Mbatha-Raw is pursued by persons unknown. The one-man-against-the-system nature of the case is solid movie material, from the dismissiveness of Omalu’s findings to the attempts by the NFL to whitewash the results of its nominally open, cards-on-the-table investigations, to the FBI bringing charges (eventually dropped) against Brooks’ character (although the timeline for this appears to have been jiggled in the picture’s favour to suggest a more express closing of ranks by the various powers-that-be).

Unfortunately, the director comes up looking rather crude and basic in other areas. An opening scene introducing Omalu’s diligence in a court case is borderline inept, as Landesman entirely distracts from the testimony by jumping around the delivery and intercutting random close-ups. It’s an attempt to underline the man’s attention to detail. but he succeeds only in kyboshing the intended representation of Omalu as a force to be reckoned with.

There are also many scenes in which the doctor needs a pep talk, stating that he doesn’t understand why people would behave this way (cover things up, not want to hear the truth), and being told the cynical reality, and that what he is doing is worthy. The most misjudged element is the “We’ve got another one” progression of the condition, though, which Landesman depicts as a virus on the loose; players break down, threaten their families or blow the brains out as punctuation points for Omalu’s dawning diligence. It’s histrionic, unfortunately, and it would have been better to entirely avoid this aspect, except as reported speech, than handling it in such a clumsy fashion.

Concussion would survive much better without these clichés, but Landesman seems intent on beating the viewer about the head to the point where any suggestion of subtlety and underplaying is lost. At one point a character draws an analogy between the denial of the NFL and that of the tobacco companies concerning the dangers of cigarettes, and a comparison might also be drawn between Concussion and Michael Mann’s big tobacco whistle-blower film The Insider. Landesman seems intent on tackling the kind of subject matter thoroughbred filmmakers like Mann and Oliver Stone have run with to great acclaim. Unfortunately, so far, he’s only revealed himself to be in the little leagues.