She’s back! The murderess is back! 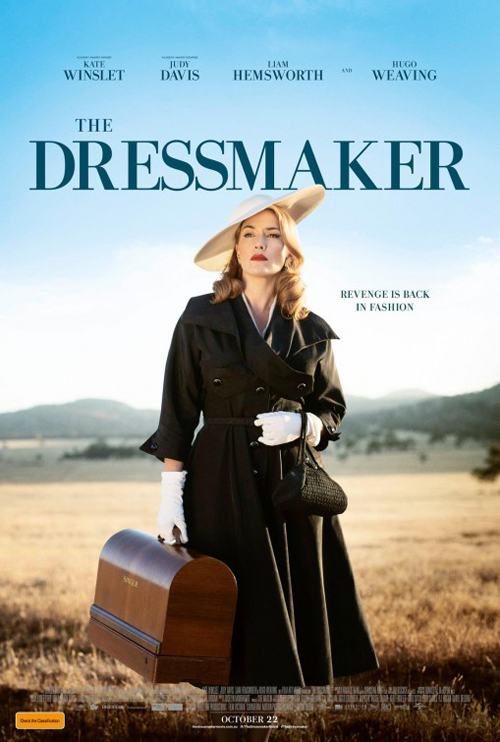 (SPOILERS) A gleefully warped, jet black comedy from Jocelyn Moorhouse, one that, for the most part, manages to juggle its potentially jarring shifts in tone and plot. The Dressmaker is a revenge drama, a murder mystery, a comedy of small town jealousies and a morality play concerning dark secrets, in which Kate Winslet’s pariah arrives home and, like a vindictive version of Juliette Binoche in Chocolat, transforms lives through her special gift of seamstressing. But Moorhouse’s approach is closer to Joe Dante’s The ‘Burbs, such that the outback settlement of Dungatar is populated by larger-than-life grotesques and crazies, and is fuelled by a vibrant stylistic approach that veers to the cartoonish.

In 1951, Myrtle Dunnage (Winslet) returns to the town she left a quarter of a century earlier, announcing “I’m back, you bastards”. She has revenge on her mind, and questions she needs answered (“Am I a murderer?”) Myrtle immediately causes a stir, rousing her caustic mother Molly (Judy Davis) from her bed and showing up at a football game in a provocative red number. She proceeds to engineer startling couturial changes on the townsfolk, in particular the fortunes of Gertrude (Sarah Snook), who attracts the attention of hot catch William (James Mackay), much to the disgust of his rich mother (Caroline Goodall). Myrtle has both a staunch defender, the cross-dressing police sergeant (Hugo Weaving) who sent her away all those years before, and a captivated admirer, rugged Teddy (Liam Hemsworth), and the picture unfolds in an unhurried and ramshackle fashion, frequently diverting into character cul-de-sacs when it isn’t picking up the threads of the did she/ didn’t she murder plot.

Indeed, at two hours, The Dressmaker is possibly a little on the over-extended side. Since this is a spoiler review, I’ll note that I assumed something of note had to happen in the last half hour, because by the 90-minute mark we had reached a “happily ever after” point with Teddy that seemed entirely out-of-sorts with the film’s deliciously unsentimental premise. So, while some may be distressed at Teddy’s demise in silo of sorghum, I felt it entirely appropriate. Indeed, the succession of deaths that follow run the gamut of tragic (Molly), hilarious (Barry Otto’s no good, wife-beating, paedophile hunchback local chemist) and appropriately gruesome (Shane Bourne’s malignant rapist), but all are in sync with a picture that has unfurled a broad, quirky canvas; it’s only the romance, as well-played as it is, that doesn’t feel built to last.

I admired Moorhouse’s Proof, but she rather lost me when she departed for America, so it’s encouraging to see her back on her own turf, delivering something so distinctive (Moorhouse adapted Rosalie Ham’s novel with her husband PJ Hogan). Of course, the eccentricity inevitably suggests other films and filmmakers. I was particularly impressed with how reliant (in a good way) the picture is on its score, a wonderful piece from David Hirschfelder, to carry the shifts in tone; playful (he gets on board with the western element, Winslet as the gunslinger returning to town to right wrongs), emotive, with just the right kind of complementary verve (such that when the picture occasionally seems unsure of its path, Hirschfelder is there to guide it). Coming across like Michael Nyman by way of Carter Burwell (there’s definitely a Coen Brothers feel to the pitch black humour), but as if applied to a Jeanne-Pierre Jeunet, it’s one of the best soundtracks I’ve heard recently.

Moorhouse has also assembled a quite superlative cast. Winslet and Davis are at the centre, exhibiting marvellous chemistry as the feuding/loving mother and daughter, the latter taking full advantage of her frequently hilarious, outrageous/outspoken dialogue to steal the show. Weaving’s sensitive sergeant is adorable, while Snook who can do no wrong in anything, essaying a transformation from dowdy to gorgeous while transitioning from vaguely sympathetic to callous and horrid and remaining recognisably the same character throughout.

Goodall is also great, and Kerry Fox, in a far cry from Shallow Grave, is the despicable, Machiavellian school mistress.  Moorhouse even elicits a memorable performance from Liam Hemsworth, something I scarcely thought possible. Maybe it’s because he’s using his own accent, or simply because his Hollywood roles are so indifferent, but this is the first time he’s made any kind of impression in anything I’ve seen. It’s difficult not to note the age gap between Winslet and Hemsworth/Snook, since they’re intended to be of the same generation, but it’s never something that feels like a deal breaker.

Some of the plot twists (the developmentally disabled brother of Teddy is able to provide the crucial evidence in the murder) seem rather derivative, and there are times The Dressmaker becomes a bit too shaggy dog for its own good, but the general milieu and tone are so inviting that it’s hard to resist. And I admire that the picture sticks to its guns, in terms of attitude, not copping out; next to no one in Dungatar is virtuous or repentant (save Weaving, who must atone for past sins against Myrtle), and Moorhouse is unstinting on the retribution in a way that proves both funny and fitting. A very pleasant surprise, and hopefully The Dressmaker’s director won’t take another 18 years to make her fifth feature.