The fact is, every single one of these guys is a terrorist asshole until proven otherwise. 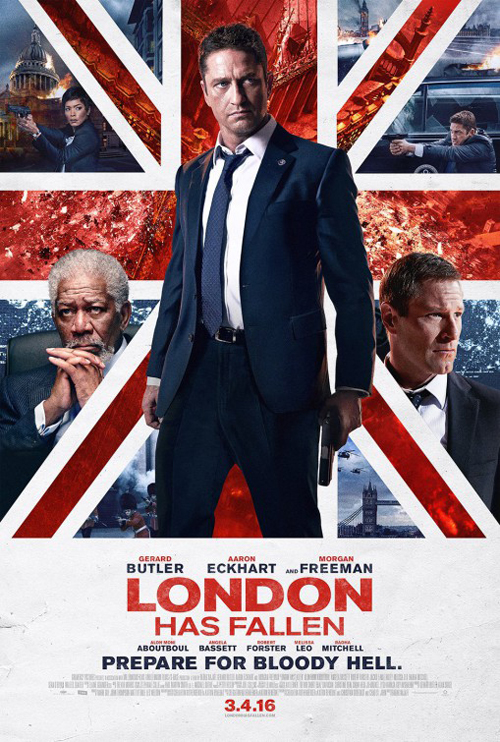 (SPOILERS) Rightly deplored for its bare-faced xenophobia, the real mark against London Has Fallen is that it’s relentlessly, inanely leaden. For a movie full of explosive fury and awash with head shots (Mike Banning never misses, even when he’s not trying too hard), director Babak Najafi does a very good job ensuring no one cares. Say what you will about the also-highly-objectionable Olympus Has Fallen, it at least had forward momentum, pace and – in all its neck snapping glee – attitude. This is closer to a bland, unfussy 24 knock-off, pushing the same kind of hasty made-for-TV approach but with even less attempt to disguise its jingoistic fervour.

What the hell do they make Gerard Butler’s Mike Banning from? Bourbon (I’m guessing not the biscuits) and poor choices, it seems. Which is presumably the mantra of returning screenwriters Creighton Rothenberger and Katrin Benedict (both equipped with a great many teeth); also credited are Christian Gudegast and Chad St. John (the latter helping ensure the return of Xander Cage is something phenomenal, so satisfying the hundreds of millions who have been demanding it for more than a decade).

Despite the unflinching manner in which evil terrorists pull out all the stops to blow the shit out of London and President Asher (Aaron Eckhart), we’re a good 20 minutes into this picture before anything of note happens, and then thoughts of how bereft it is are confirmed when an innocent child doesn’t blow up the German Chancellor with a flower (I mean, what a waste). It’s a small consolation that the said chancellor does indeed buy the farm soon after.

At least Banning is reliably, inconceivably politically incorrect, decapitating a terrorist on a pillar after the latter has the gall to swear at him (“Fuck me?!”) and his response to Asher noting he’s never seen a man strangled before (“I didn’t have a knife”) warrants a ghoulish chuckle. He even has some character development, since poor Radha Mitchell (poor, as in, has her career come to this?) is expecting his bibby (“Stay alive, you gotta see your kid” a dying Angela Bassett very unselfishly implores).

If London Has Fallen had a degree of self-awareness about how dreadful it is, it might have been moderately good fun. There is, in the mid-section, a certain unlikely, stark pointedness to its relentless distastefulness, taking in as it does the prevailing attitudes to those of Middle Eastern extraction (“The fact is, every single one of these guys is a terrorist asshole until proven otherwise”) and the old “no negotiations” attitude to terrorists (“That’s the sound of your brother dying” Banning announces to the leader; “Was that really necessary?” inquires the president. “No!” replies Banning – Ronnie would have approved).

One might even see a commentary on the rise of ISIS from nowhere in Banning’s blasé “Why don’t you boys pick up your shit and head back to Fuckheadistan or wherever it is you’re from” (the bad guy, played by Alon Moni Aboutboul, is actually a Pakistani arms dealer). I half-hoped this would lead to the revelation that the terrorists were secretly working at the behest of bad seeds in the US government. If not Asher himself then Jackie Earle Haley. But no, the most shocking thing about London Has Fallen is that Haley plays a good guy!

The uptick doesn’t last long, however. London Has Fallen feels and looks cheap (it was quite cheap, so that’s alright, and going against the grain of sequels this year actually managed to make more than its predecessor worldwide), with a capital city so conveniently deserted, you’re half expecting Daleks to show up (now, that might have been interesting). Mind you, the prospect of a Prime Minister Clarkson would have anyone fleeing.

No one involved in this, pursuing a pay cheque, should feel very good about themselves, but one might suggest that it at least makes no fatuous plays towards moderation and seeing the “full picture” found in most hand-wringing War on Terror movies (whilst really reinforcing the current agenda). London Has Fallen isn’t terrible because of its political vacuity (at least, no more so than Olympus); it’s terrible because its ham-fisted in execution, dramatically incoherent and really quite boring. Except for that brief bit where Butler goes really kill-happy.