I’m having a squabble with the chairs in this kingdom. 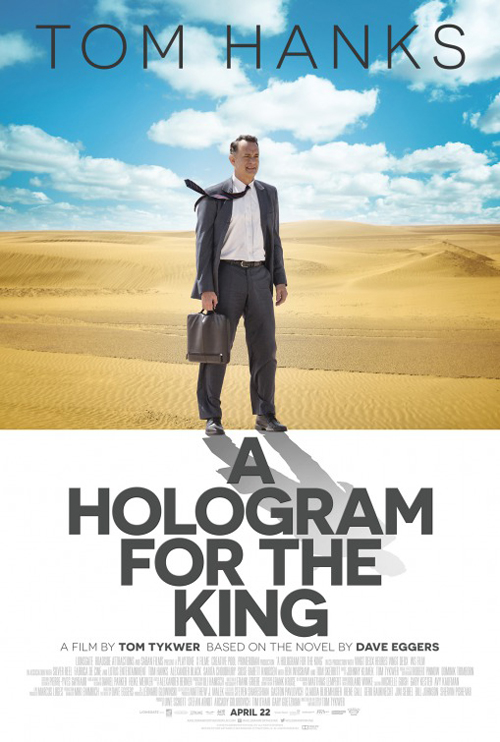 (SPOILERS) Tom Tykwer makes stunning-looking films (Perfume: The Story of a Murderer, The International and his sequences for Cloud Atlas among them), even if his – usually self-penned – screenplays aren’t quite on the same level. This is especially the case with his adaptation of David Eggers novel A Hologram for the King, which manages to finish up as disappointingly nothing much of anything, an amiable enough shrug of a movie that delivers Tom Hanks with his most traditionally Hanks – as in comedic – role in many a moon. It certainly isn’t a satire, although there are traces of same in its bureaucratic manoeuvrings, while its romance feels like an element decided upon during a script conference devoted to what the story lacks rather than what it merits. And as for its representation of living in Saudi Arabia, it might almost have been commissioned by their tourist board (albeit it was filmed in Morocco).

As in, there’s nary a whisper here of oppressive regimes and human rights violations; it’s such a jolly fine place for westerners to go, the lead character even takes up residence there at the end. After all, if you want decadent booze and drugs, no problem; you can find them. The only warning you need take note of is not to mention the CIA. The country even allows surreptitious topless bathing, as Hanks’ Alan Clay goes on a date with Sarita Choudhury’s doctor, Zahra. And the vistas! Tykwer’s regular cinematographer Frank Griebe ensures Morocco looks gorgeous.

Indeed, if you want to find someone to point to as a villain, look no further than old favourite China, which not only bought up Alan’s previous firm, but also undercuts his bid to sell holographic teleconferencing to the Saudi king.

If you can get past the absence of moral perspective, then much of what’s on display swims in familiarly appealing fish-out-of-water territory, and Hanks shows that, while his comic chops may have been untested for some time, they’re as versatile as ever. The first we see of Alan is an surprisingly active mime to Talking Heads’ Once In A Lifetime (one of several vibrantly visualised dream/drunk sequences), and he will run through a number of encounters and characters who leave him suitably, and amusingly, exasperated or at a loss. These include Alexander Black’s comedy cabbie Yousef (a bit like a less-dense Father Dougal), Sidse Babett Knudsen’s frisky expat Hanne, and a nigh-on impenetrable ladder of bureaucracy that prevents him from talking to anyone of importance at the development site (he and his colleagues have been set up in a tent, with no Wi-Fi and a busted air-con).

Alan is also the less-than-proud owner of a rather unsettling lump on his back which, though it fails to erupt into Richard E Grant’s second head, does lead to his first encounter with Zahra. Hanks and Choudry have low-key chemistry, and indeed Mr easy-going Hanks ensures pretty much every scene he’s sharing establishes a well-matched, breezy contrast of performance and pitch (his back-and-forth with Black is particularly rewarding, as Alan grows frustrated over everything, from music, to food, to being driven to Mecca).

A Hologram for the King’s over-the-hill businessman rediscovering his enthusiasm for life is less effective in its through line than the similar but more overtly fantasy-based Salmon Fishing in the Yemen, perhaps because the latter is unapologetic in its oddball plotting and nurtured romance, where this charts an emotionally unpersuasive course. While Tykwer keeps the running time admirably tight, there’s never a feeling that Alan has to do anything very much to right his ship. He comes, he sees, he almost imperceptibly self-discovers, and then his whole new life is miraculously sorted.