We're not leading the lives we are meant for... we're meant for something else. 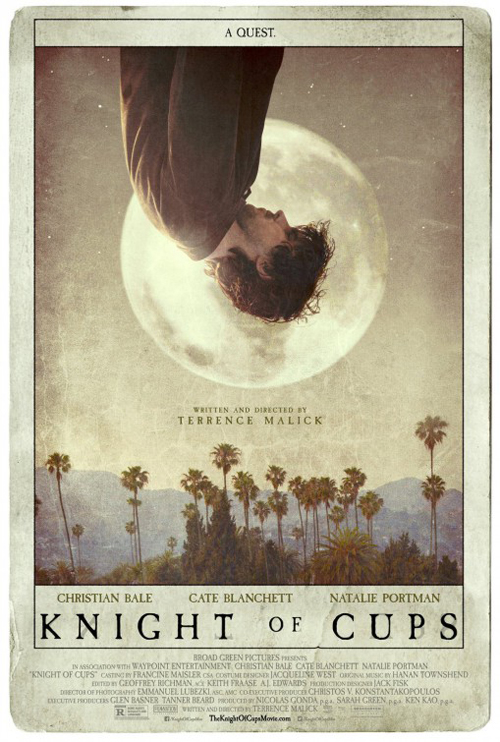 (SPOILERS) Even a Terrence Malick apologist has to draw a line somewhere, and it seems the director has finally succumbed to inglorious self-parody. The warning signs were there with To the Wonder, but it’s the repetition of the same brush strokes and signatures to the point of banality that sadly seals the deal in Knight of Cups.

It doesn’t help that Christian Bale is an essentially unsympathetic protagonist. He’s a natural for a meaty part, but emphatically not favoured by wistful contemplation and half-murmured regrets. Malick’s fractured constructions are ever-intentional, but they reach breaking point here, as Bale’s Hollywood writer Rick charts a course of reflection based on a misspent life of profligate relationships.

There’s a loose structure based on a tarot reading (Rick’s significator is the Knight of Cups), but seemingly little actual rigour to the passage through titled sequences based on The Hanged Man, The Hermit, Judgement etc. So too, his array of Hollywood lovelies (Cate Blanchett, Natalie Portman, Frieda Pinto, Teresa Palmer, Imogen Poots) pass by with little impact. We meet Rick’s brother (Wes Bentley) and father (Brian Dennehy; suggestive of the daddy issues in The Tree of Life), but here likewise the whole is so lightweight, so set on the meditative feathery pillow, that it blows away.

Maybe that’s Malick’s intent, but it translates as pure parody. Knowing that there was no script only adds to this; you can virtually see the director telling Bale “Emote against that tree, will you, Christian, and we’ll add some vague musing on the voiceover later”. Stir and repeat. Whatever Malick’s grand designs (Ben Kingsley’s narrator introduces the film, quoting Pilgrim’s Progress, and telling of the prince who forgot who he was; Rick spent “all those years, living the life of someone I didn’t even know”), unfurling protracted tone poems of the restless soul, the wilful lack of form fails to pass muster this time, in what becomes a two-hour slog. It isn’t transportive, merely laboured.

The snatches of pseud-poetic rambling are hit-and-miss (“Because I stumble down this road like a drunk, that doesn’t mean it’s the wrong one”; “You think when you reach a certain age, things will start to make sense. Then you find you’re just as lost as you were before”; “I suppose that’s what damnation is. The pieces of your life never come together”; “So much love inside us, that never gets out”), cumulatively leaving one convinced that, if you attempt to wax lyrical long enough, something vaguely coherent will come out amid the dross.

There are a few high points, however. The use of Wojciech Kilar’s Exodus as the main theme very nearly forgives the picture its profuse transgressions, lending the internal fumblings occasional weight and emotional substance they otherwise lack; mournful melancholy at a wasted life.

The imagery, courtesy of the masterful Emmanuel Lubezki (three Oscars on the trot can’t be wrong, can they?), is extraordinarily beautiful, if you can get past Malick’s penchant for low angle, handheld, fish-eyed haziness. At one point there’s even a glimmer of something enticing as writer Peter Matthiessen (At Play in the Fields of the Lord) offers some nuggets of zen (“If you’re in a cave eating nettles, it’s not so difficult to keep your life simple”); it struck me that spending 90 minutes with this guy, rather than 90 seconds, and whatever he had to say, would be far more rewarding than anything Malick could come up with, something that might tend towards My Dinner with Andre levels of inspired rumination.

As ever, throngs of performers line up to appear in a Malick joint, most of whom barely register. Antonio Banderas comes on like the compere of a Fellini movie, introducing Rick to a party full of young beauties (“There are no principles, just circumstances”) and you may spy the likes of Jason Clarke, Joel Kinnaman, Dane DeHaan, Ryan O’Neal, Joe Manganiello, and Michael Wincott. Or you may not.

Fellini’s an appropriate reference point, as more than once I was put in mind of Peter Sellers’ parody of the director in After the Fox: “What are we running from?” asks Victor Mature’s Tony Powell. Sellers’ master criminal the Fox, masquerading as a movie director, replies ‘From yourselves. Uh, you get the symbolic meaning? Aah! No matter how fast you run, you can never run away from yourselves!’ ‘Aah! Beautiful!’ exclaims buffoonish Tony. Doubtless Bale made similar exclamations regarding the weight and wisdom of Malick during the course of Knight of Cups (and their next, Weightless, a title just itching for brickbats). 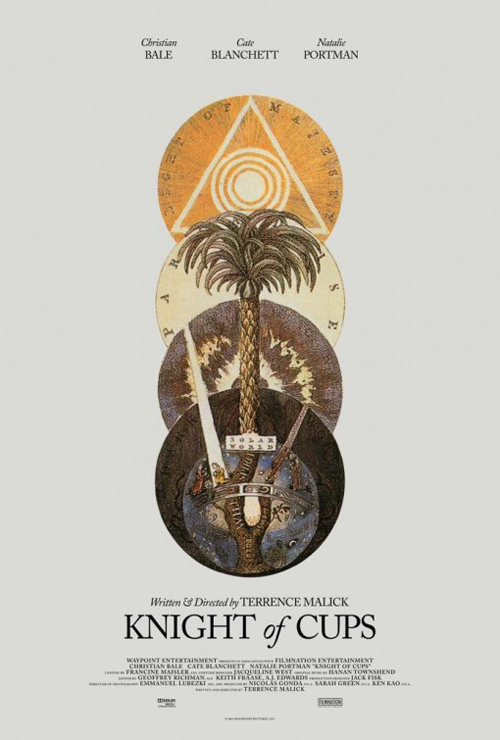