None of this makes sense. They knock planes out of the sky and cause earthquakes, but they're afraid of an army of children? 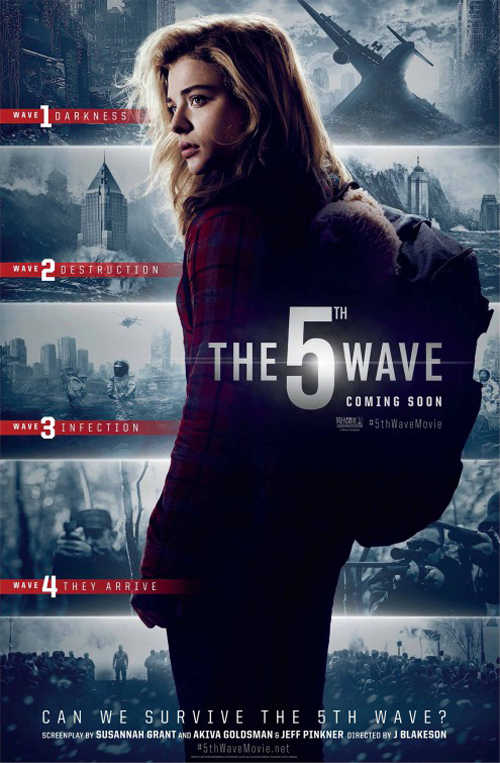 (SPOILERS) Not actually offensively bad, merely persistently unimaginative, dull and derivative, and thus another inevitably failed YA franchise non-starter. Based on Rick Yancey’s novel (the first in a trilogy), The 5th Wave is an alien invasion yarn, concerning itself with the youthful resistance that forms in the arrival’s wake, and thus probably more familiar in basic form to TV viewers (with the likes of V or Falling Skies) or, if you transpose the aliens for commies, aficionados of John Milius’ Red Dawn.

J Blakeson directs serviceably enough, but without any real flair, perhaps because he’s only matching the material, which comes courtesy of a screenplay from Susannah Grant (Erin Brokovich) Jeff Pinkner (JJ Abrams fare such as Alias, Lost and Fringe, but also The Amazing Spider-Man 2) and – cue fanfare – Oscar-winning Akiva Goldsman, the scribe behind a succession of unmitigated shite, including his directorial debut Winter’s Tale. Which I actually quite liked, but there’s no accounting for poor taste.

The picture sets us up for something considerably more hard-edged than it delivers, with an opening scene in which Cassie (Chloë Grace Moretz) shoots an injured man, mistaking his crucifix for a weapon. As you do. Perhaps this would be something along the lines of How We Live Now, a post-apocalyptic tale that didn’t stint on how being a young and rebellious in an untamed or oppressive future wasn’t necessarily all YA fiction had cracked it up to be. Instead, the flashbacks to Cassie’s former life (featuring Ron Livingston and Maggie Siff as her parents) recount the different waves of a rather rote alien invasion (EMP, tidal, bird flu, and aliens among us) and her less-than-riveting reaction to it.

She fancies a boy (Nick Robinson) but becomes separated from him, so next she fancies another boy (Evan Walker), who’s half alien (and who decides to help her on the grounds that “Love’s not a trick. It’s real. I know now”; yes, these are one of those alien hoards with no concept of this human emotion we call love). She becomes separated from the little brother she swore to protect (for the sake of a teddy! Mind you, it is quite the plush teddy), who falls in with that first boy she fancied, who has been corralled by Liev Schreiber (presumably making this one for his kids, or they persuaded him, the little urchins) to fight the good fight against the aliens, who are masquerading as humans.

We know something is wrong with this picture, on account of Liev and his merry military mob’s prior massacre of a tent full of parents, but the twist that the alien detection device actually suggests normal humans are aliens, so the kids to do the slaughtering dirty work for the actual aliens, is pretty neat ("We're not fighting the fifth wave. We are the fifth wave"). That’s about all that is, though, aside from the appearance of Maika Monroe in a kickass supporting role, instantly making you wonder why Moretz was cast as the lead (particularly since her performance is mostly brow-furrowing). The final melee is both lacklustre and sequel-baiting.

So YA is in a sorry state right now, with Divergent heading for TV and Maze Runner’s finale delayed until 2018. The 5th Wave joins the reject pile with The Giver, Vampire Academy, Ender’s Game, Mortal Instruments, Percy Jackson, The Host, Beautiful Creatures and no doubt more besides that have been lazily assumed to be the next Twilight or The Hunger Games. Of course, it will only take one solid hit to reignite studio enthusiasm for the genre.