Ugly is what we do, son. 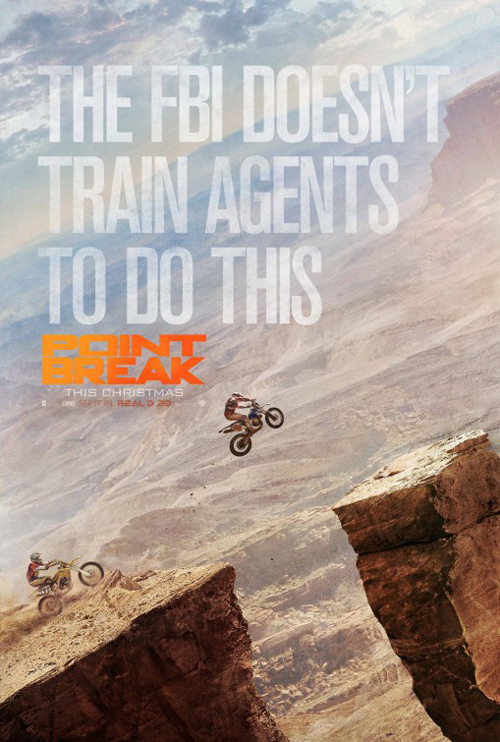 (SPOILERS) Hollywood evidently has an endless capacity for remakes, and most of them end up redundant at best. This takes a new biscuit for pointlessness, however, an irreducibly soggy, surf-saturated one, that embraces ineptitude beyond the bounds of the reasonably feasible. Kathryn Bigelow’s original is still a titan in terms of direction (the bank robbery! That foot chase!), and supported by a perfect cast (rarely better Keanu, Patrick Swizzle, Lori Petty, all of them definitely needing sympathetic directors; Gary Busey is a legend in whatever he’s in, of course). Point Break 2015 has a shitty director and a shitty cast, zero sense of humour, an inverse surfeit of awesome and 0% testosterone.

I’ll be fair and admit that Edgar Ramirez, Delroy Lindo and Ray Winstone (sounding like his mouth is full of toothpaste) are all passably non-descript and borderline forgettable, while Teresa Palmer (or is that Kristen Stewart?) actually is forgettable.

Luke Bracey, on the other hand, the latest Australian export to bungee into the blockbuster scene and ricochet right out of it again, flaunts ludicrous tattoos in the place of a personality and boasts the award-winning mullet of Chesney Hawkes. Poor Luke’s an utterly charisma-free chump who makes the likes of Sam Courtney and Jai Worthington look like Russell Crowe (the next generation of whom being, let’s face it, the guy all the casting agents are scouring the Outback for).

So, while there’s an occasional laugh, it’s entirely down to the vacuum Bracey leaves when attempting to fill Keanu’s shoes, most mirthfully as he repeats the classic “firing the gun in the air out of frustrated bromance” moment (see also Hot Fuzz). In the opening scene too, when he loses a dearest pal, his emotional breakdown is a hoot to behold.

Ericson Core, who sounds like a failed mobile phone model released a decade past its time, is both director and cinematographer, and bathes the picture in a hopeless green hue while entirely flunking the main task of investing the action with a modicum of excitement, engagement or thrills.

Which is a fairly significant drawback, since this is trying to outdo the extreme sports of the original with a band of extreme sports guys in pursuit of spiritual enlightenment (some nonsense about completing the Ozaki 8 – ordeals to honour the forces of nature), courtesy of a Kurt Wimmer screenplay (last sighted delivering the bust of a Total Recall remake script); there’s something of a Now You See Me complete lack of believability attached to all of the feats (aside from the man-glider scene which is so uncool, it’s very nearly cool). Indeed, we’re frequently fed rubbish green screen (or would it have been blue, since everything else is green?), entirely failing to suspend our disbelief (most notably with the big wave finale).

When Bracey reveals he’s FBI it’s a no-kind-of-anything moment, in a no-kind-of-anything movie that managed to film in 11 different countries and make all of them look less than impressive. Point Break is truly an abominable beast. To coin their reference to the original title, this one had reached breaking point on the drawing board.