Now we’re all in the stew, for an impulsive act, for a selfish act, under my roof! 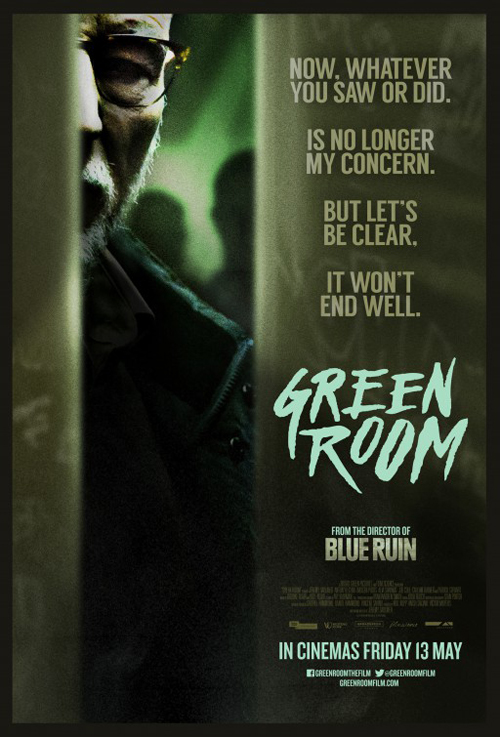 (SPOILERS – also for Bone Tomahawk) Jeremy Saulnier’s follow-up to the keenly studied Blue Ruin (what next, Red Rum?) lacks that picture’s depth of character and thematic epistle on the pitfalls of revenge, instead positioning itself as a very straightforward siege movie. Assault on Precinct 13, but with an Oregon bar as the police station, a punk band as the besieged, and a posse of rabid neo-Nazis as the remorseless menace. Saulnier imbues the proceedings with the tension-ratchetting precision of a master of the genre.

Although, some have speculated over just what genre that is. Horror or thriller? It’s a bit semantic, really. Substitute zombies or unstoppable, undead mariners for the neo-Nazis and, with all the stabbing, gouging and mutilation going on, it would happily fit into the horror genre (to be fair to Saulnier, he isn’t one to linger on the violence, but there’s no shortage of it). Saulnier also plays with the rules of survival like one who knows the horror genre backwards, picking off the protagonists in such an atypical manner that it’s unclear who is going to survive and how.

Macon Blair was the unlikely “hero” of Blue Ruin (returning here as a neo-Nazi lieutenant) and Saulnier shows a similar willingness to shrug off expectations in Green Room. When Anton Yelchin’s guitarist Pat has his hand nearly hacked off at the wrist as the standoff escalates, we suspect the writer-director may be pulling a Hitchcock number and dooming the presumed lead in the first (well, second) reel. That Pat turns out to be something of a survivor may conform to lead-actor type, but it’s very much along the lines of the also-incapacitated Patrick Wilson in horror-western Bone Tomahawk, where against the odds – straining credulity, if you want to be picky, although Green Room is a movie where there’s a discussion on paintballing not reflecting reality, with real guns, so Saulnier is at least embracing his fictions – the least likely protagonist pulls through.

Certainly, I had little doubt Joe Cole’s Reece, as the only band member who can take care of himself with any degree of proficiency, would end up dead, but the escalation of events, and even the flip markers defy definites; I was sure Saulnier put in the line about letting Reece bleed out because he expected us to expect him, unattended, to not be nearly as dead after all. He also brings in Mark Webber's Daniel as a saviour, only to summarily dispatch him five minutes later. And, against the odds – since its incredibly stupid, like baiting an angry, skinhead badger – it isn’t the anti-Nazi song (The Dead Kennedys’ Nazi Punks Fuck Off) they open their set with that leads to the subsequent deadly events.

And, if it’s become something of a cliché in recent years that the most survival-friendly character turns out to be female, Saulnier is less than reverent with dispatching band member Sam (Alie Shawkat, who is just as good here as in Arrested Development, such a sure, confident performer she really ought to be headlining movies). It’s left to Pat and Amber (Imogen Poots, too often marginalised in thankless roles, gives a wonderfully unsentimental, matter-of-fact performance) to make the best of dire straits. Saulnier repeats devices from Blue Ruin – characters are terrible shots, there’s surprising stoicism in the face of death – but in tone this is much more stripped-down and streamlined. While he indulges in occasional fancies – the mosh of Ain’t Rights’ performance becomes a slow-motion ballet set to classical strains, early interludes of montage between the band mates providing tonal build up for what is to come – there’s no side steps once he gets going.

Patrick Stewart, meanwhile, prevents the Nazis from becoming a mindless horde. If Blair’s Gabe is out of his depth, Stewart’s Darcy’s failing is over-confidence in his clean-up operation. To that extent, he strays into the Bond villain territory of leaving the scene while his victims get a chance to escape, but Stewart has rarely gotten his teeth into a baddie (Conspiracy Theory was a fairly standard type) and clearly relishes the opportunity; he’s actually not soporific for a change!

I don’t think Green Room represents Saulnier’s growth as a filmmaker, however, except maybe technically.  One might argue he’s chosen the easiest of real-life subjects, ones who have it coming, and combined with the embrace of cathartic bloodshed at the climax, it’s something of a step down after the anti-revenge realisation that concludes Blue Ruin. That said, it’s easy to see why this has been a feature of many a year-end best of list, and it underlines once again what a too-soon departure Yelchin’s was.