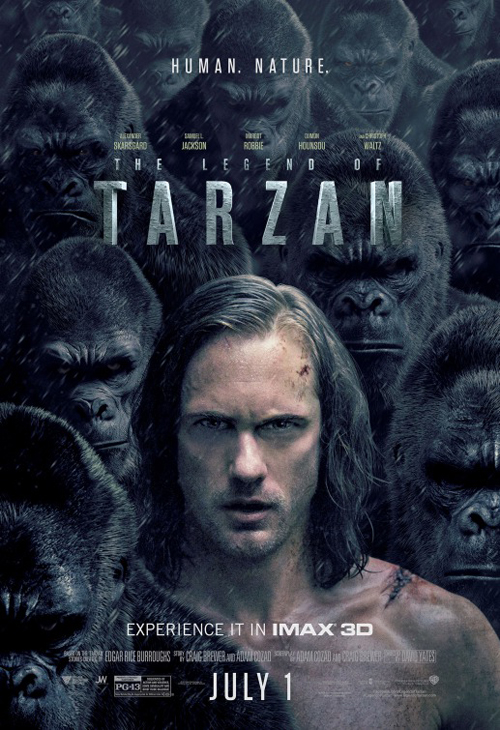 (SPOILERS) Good grief, this is ape shit. And not in a good, crazy-ape-shit-bonkers way. Or even monkey nuts. David Yates is very lucky to have the Harry Potter franchise to fall back on if The Legend of Tarzan is indicative of the standard of ineptitude he delivers when he doesn’t have the keepers of holy Harry statutes hovering over him, watching his every move. The movie’s mystifying reasonable performance at the box office last summer can only, I assume, be put down to the throngs of Skarsgård devotees itching to see him rippling his abs.

I certainly can’t figure out what else would have induced anyone to seek out this picture (we should, thankfully, be spared a sequel, as it cost far too much to merit a follow up). Reportedly, there were production problems en route, with WB thinking they had a disaster on their hands (they did, pretty much). You can see certain worried calculations being made in advance, such as casting Samuel L Jackson in a prominent role in an attempt to head off the clumsiness of having a great white saviour who knows how to live in Africa better than the actual Africans. Jackson, after all, is used to defending insensitive white people against Spike Lee. Sam is entirely reliable here, which is to say that he’s on autopilot, picking up his lavish cheque, and not remotely enthused by anything other than his latest rug (there’s a gag about him licking a CGI ape’s nuts, which is roughly representative of what Yates is doing to the Tarzan legend, and takes us back to the first paragraph).

There’s also an attempt to model Tarzan as the original superhero, except that instead of suiting up, he strips down. Curiously, the bashful makers couldn’t quite bring themselves to have the Lord of the Jungle prancing about in a loincloth, except in flashbacks, so Alex’s troos have to settle for falling dangerously low about his hips. But, to be fair to Yates, our jungle-infested vine swinger’s continually adored by the female gaze; when Tarzan gets it on with Jane (a resoundingly forgettable Margot Robbie, proving she can only do so much when there’s nothing to dig into – she may as well be Denise Richards here – but she’s also entirely to blame for taking the damsel in distress role), it’s all about his flesh. One might, as such, advocate the picture as an updating of Tarzan the Ape Man, if it was all about Miles O’Keeffe rather than Bo Derek, that is. And if one were to disposed towards advocating Tarzan the Ape Man in the first place (which, let’s face it, no one over fourteen would be).

What it wants to be, I suspect, is Greystoke: The Legend of Tarzan, Lord of the Apes done right (and playing for the blockbuster crowd). Instead, it gets almost everything wrong. Where Greystoke boasted unconvincing ape costumes, Legend has whack CGI. Whack CGI everywhere. Really, this is pitiful stuff, with distractingly distended CGI apes battling a tangible Tarzan, and a distractingly distended CGI Tarzan swinging through the jungle, attempting to leap onto a CGI train. It’s enough to give Stephen Sommers, crown prince of gravity-free, CGI gymnastics, the scream habdabs. There’s more than a surfeit of CGI animals, so many I frequently wondered if I was catching the Jumanji reboot a year early, and Yates in his studio jungle (perhaps he was following Tarzan’s reasoning – “I’ve already seen Africa, and it’s hot”) and with his two-tone colour grading draining any hint of bona fide atmosphere, we’re never in danger of mistaking this for a believable setting.

The plot ostensibly posits a serious-minded piece about Tarzan defeating slavery in the Congo, but with Christoph Waltz hamming it up in the most irritating manner (seriously, Christoph, quit it already with the Hollywood villains. What’s that? You’ve got Alita: Battle Angel lined up. Oh, well) and pretty much every element following his lead in caricature, there’s little chance of respect shown or given. Skarsgård is entirely bland in the lead role, stuck somewhere between working hard at maintaining an English accent, meeting the demands of eye candy, and glowering. Mind you, Yates cast him because he loves “his verticality”. That’s fair. If there’s one thing The Legend of Tarzan has got, it’s verticality.